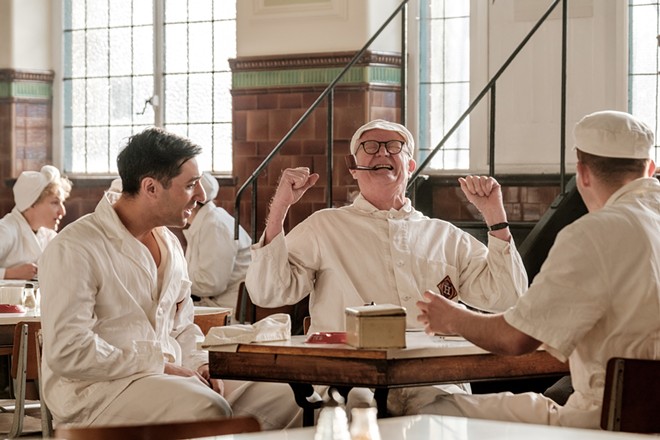 A successful art heist can really raise the spirits.

As cozy as a hot cup of tea on a cold afternoon, Roger Michell's The Duke is a British working-class dramedy in the vein of The Full Monty or Calendar Girls or Kinky Boots, a story of a scrappy underdog who comes up with a crazy scheme to fight for what he believes in. It's based on the true story of Kempton Bunton (Jim Broadbent), a taxi driver, small-time political activist and amateur playwright who pulled off one of the unlikeliest and most audacious art heists in modern history. In 1961, Kempton stole painter Francisco Goya's Portrait of the Duke of Wellington from the National Gallery in London and hid it in a wardrobe in his spare bedroom.

Kempton isn't a professional art thief, and he isn't looking to get rich. Instead, he sees the theft as a political statement, a protest against the money that the British government spent on the painting. Kempton specifically objects to the unique British practice of charging license fees to everyone who owns a television, believing that war veterans and the elderly should be exempt from the fees. He's already performed local acts of civil disobedience to further his cause, even serving a short jail sentence for refusing to pay his own license fee. But "kidnapping" the painting, as he sees it, takes his efforts to a new level.

Michell and screenwriters Richard Bean and Clive Coleman never mock or undermine Kempton's crusade, even as they present him as a bit of a goofy dreamer, sending off his unsolicited scripts to the BBC in hopes that they'll be produced. The movie takes its time getting to the heist, first establishing Kempton's political beliefs and his somewhat chaotic home life, with a pair of ne'er-do-well adult sons and a pragmatic, long-suffering wife. Helen Mirren brings grace and sensitivity to the somewhat stock role of Kempton's wife, Dorothy, a hard worker who wishes her husband would give up his foolish battles against authority and focus on holding down a job.

The Buntons are pleasant company, but the movie meanders a bit until it gets to the theft of the painting, after which Kempton and his son Jackie (Fionn Whitehead) scramble to hide it while figuring out how to use it as leverage for Kempton's mission. The filmmakers keep the focus on the Bunton family, even as the theft becomes major news and law-enforcement officials speculate about highly trained international criminals who might be the culprits. Broadbent makes Kempton sympathetic and funny, real-life qualities that made a major difference when he was eventually caught and put on trial.

That outcome is never in doubt, since The Duke opens with Kempton in court, before flashing back to his pre-heist days. Matthew Goode invigorates the movie when he shows up in the final act as Kempton's suave, savvy lawyer, and the courtroom scenes are enormously entertaining. The low-key family drama is less flashy, and it's not always as compelling, although Broadbent and Mirren have easy, understated chemistry as the long-married couple who are intimately familiar with each other's quirks and flaws.

The Duke is the final narrative film from Michell, who died last year, and it's a fitting capper to a career full of lovely, character-driven dramedies like Notting Hill, Venus and Le Week-End. Michell adds just enough zippy early-1960s style to evoke the period, without ever distracting from the carefully crafted characters and warm, lived-in performances. The Duke is never quite as cantankerous as its main character, but it still makes for equally enjoyable company. ♦

Robert Eggers' The Northman is a gorgeously primal revenge epic