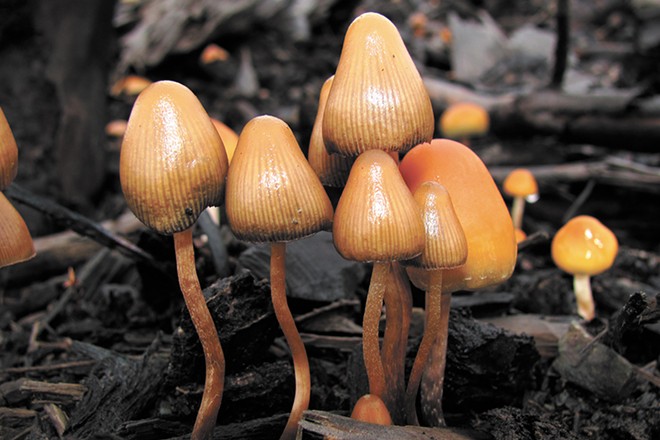 A type of psychedelic mushroom found in Washington and Oregon.
By Benedict Carey
The New York Times Company

Since childhood, Rachael Petersen had lived with an unexplainable sense of grief. So in 2017 she volunteered for a small clinical trial at Johns Hopkins University that was testing psilocybin, the active ingredient in magic mushrooms, for chronic depression.

The prospect of tripping for hours was scary, she said, but the reality was profoundly different: “I experienced this kind of unity, of resonant love, the sense that I’m not alone anymore, that there was this thing holding me that was bigger than my grief.”

On Wednesday, Johns Hopkins Medicine announced the launch of the Center for Psychedelic and Consciousness Research, to study compounds like LSD and psilocybin for a range of mental health problems. The center is the first of its kind in the country, established with $17 million in commitments from private donors and a foundation. Imperial College London launched what is thought to be the world’s first such center in April.

But the drugs’ history of abuse and the still-thin evidence base have kept the field largely on the fringes, and many experts are still wary. Psychedelic trials cannot be “blinded” in the same way most drug trials are: Participants know when they have been dosed.

The scientists doing the work, at Hopkins, Imperial College and elsewhere, acknowledge as much and say the new infusion of funding will help clarify which drugs help which patients, and when the altered states are ineffectual or potentially dangerous.

“It’s been hand-to-mouth in this field, and now we have the core funding and infrastructure to really advance psychedelic science in a way that hasn’t been done before,” said Roland Griffiths, a neuroscientist at Johns Hopkins who will direct the new center. Griffiths said the new funds will cover six full-time faculty members and the costs of running trials. Among the first of those trials are a test psilocybin for anorexia nervosa and of psilocybin for psychological distress and cognitive impairment in early Alzheimer’s disease.

The literature so far suggests psilocybin is promising for chronic depression and addiction, and that MDMA, or ecstasy, can help people with post-traumatic stress, including veterans. Cannabis and LSD also have been tried, for addiction and other problems, with mixed results.