Wearlords Vintage: Jon Swanstrom's decades in the vintage scene have taught him 'the more unusual, the better' 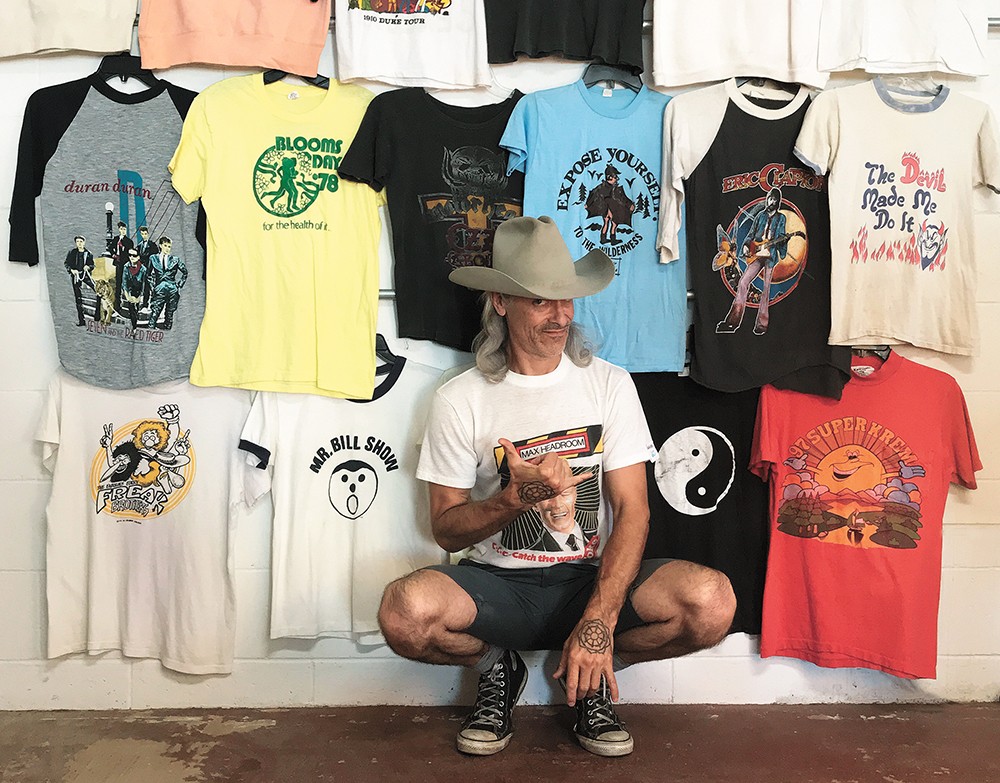 Jon Swanstrom has been collecting and selling vintage clothing for 30 years.

It all started in the early '90s when the owner of Spokane-based Wearlords Vintage found a trunk of old clothes inside a house he'd just bought. Inside was a World War II bomber jacket that he then sold to a vintage store for $400. He's been collecting and selling classic vintage pieces ever since.

"I just love vintage clothes," Swanstrom says. "It was part of punk fashion and I'm an old punk rock guy, so back then I shopped at thrift stores."

Swanstrom primarily specializes in vintage T-shirts, but also collects old denim and military clothing, specifically from the 1940s and '50s.

"I really like classic American menswear. It could be anything from a cool 1940s suit to an '80s T-shirt," Swanstrom says. "I like stuff that's really bold and beautiful."

Swanstrom searches all over Spokane to find his pieces, which he sells at Chosen Vintage in downtown Spokane under his Wearlords brand, as well as on eBay and Etsy.

"Since I've been doing it a long time, I have people who bring me stuff who have been bringing me things for a while. Then I also go to estate and garage sales when I can, and thrift stores sometimes. I look all over the place," Swanstrom says.

As competition in the vintage market grows, however, it's become rarer to find outstanding pieces.

"There's more competition now because everyone knows what vintage is," he notes. "Now there are people who go out to the Goodwill Outlet all the time. Also finding true vintage stuff is difficult. As years go by, it's getting harder and harder."

It's also become challenging for Swanstrom to find the types of pieces he really loves because those earlier eras of fashion are falling out of favor for current trends rebooting 1990s fashion.

"There is this 20-year cyclical thing — like the '90s is popular now," he says. "So you just have to keep up with the trends and inevitably there will be customers who want it."

Because of this cycle, vintage fashion from any era hasn't gone out of style, and probably never will, Swanstrom predicts. He also finds that his inventory sells well because each piece is one of a kind.

"It's always the unusual stuff that sells," Swanstrom says. "The more unusual, the better, because there aren't 8,000 of them online or 50 of them in store. That's why people shop vintage. Because they want to have something unique."

And when Swanstrom says unusual, he means it. He has a whole laundry list of unique items he's sold over the years: vintage underwear, a satin and silk jacket from the '50s with a map of Alaska on the back, a pair of Converse tennis shoes from the 1920s and a military paratrooper outfit, to name just a few.

To that end, Swanstrom tries to find and sell pieces that are unique, yet classic. He says he and other local vintage collectors' ever-changing inventories offer great pieces for anyone.

"Wear what feels good on your body, not what somebody else is going to like," he says. ♦