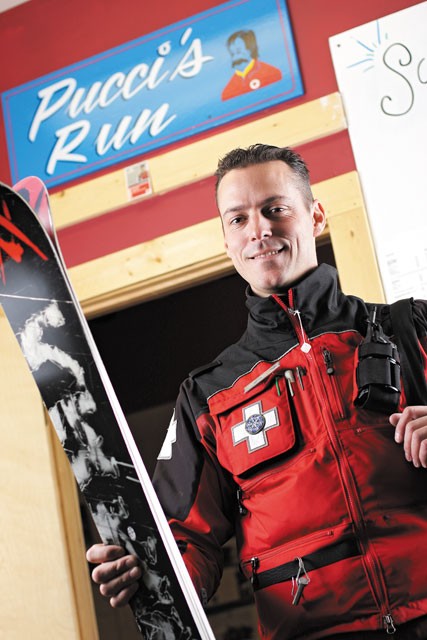 Young Kwak
Our group has worked together 20, 30, 40 years, says Schweitzer Ski Patrol Captain Jonah Pucci, it makes the rest of us want to keep getting better.

Think you’ve got a tough job? Jonah Pucci’s winter workdays as one of the two ski patrol captains at Schweitzer Mountain Resort start at 6 am if he’s on avalanche control. Later, his day may be filled with broken arms and legs, head trauma, back injuries and the aftermath of people colliding with the ground, trees and each other.

“It’s all over the board, as far as how they react. I see people completely freaked out, mad, scared, crying, all of the above,” Pucci says.

Pucci, 33, has seen and helped a lot in his 18 years on the Schweitzer Mountain Resort Ski Patrol. The main role of the ski patrol is to provide a safe environment for the customers who pay to ski, and to provide help if something goes wrong. But the job duties read like something out of a “Worst-Case Scenario” handbook: avalanche control, chair-lift evacuation, high-angle rescue, cold injuries and rope and cliff rescue.

It’s difficult to cover all of Schweitzer’s 3,000 acres, but it helps when the mountain is almost a second home. Pucci started skiing at Schweitzer at age 2. His dad, John, is the Ski Patrol director, and the namesake of Pucci’s Chute ski run on the mountain. Jonah’s brother, Allo, is also on the ski patrol. Together, the three have 84 years of patrolling experience.

“The reason I’m drawn to ski patrol is my dad — I grew up in the lift shack. And it’s also the camaraderie,” Jonah says. “The skiing, of course. And I’ve always liked to help people my whole life. I like the dynamics of the job. Things are always changing weather-wise, and you have to think on your feet. It’s a great job for that.”

To an outsider — especially a nonskier — the job seems dangerous: zooming to administer first aid on steep, icy slopes, contending with freezing weather and snowstorms. But Pucci says it only looks dangerous.

“I guess some people would consider what we do risky, but we do so much training that we’re taught the safest way to do a risky job,” he says.

It’s a full-time job during ski season, with patrollers typically working a 9.5-hour shift. (Pucci also works at the Sandpoint Fire Department.) On any given weekend day, the patrol might have as many as 20 calls to handle. Slower days average five calls for help.

Despite the advent of cell phones, most injury reports come in the old-fashioned way, via the ski-lift operators. Skiers riding the lifts spot somebody hurt or see the universal “I need help” sign of crossed skis stuck in the snow, and report it.

The “lifties” then call the main ski patrol station on the top of Chair 6/Snow Ghost, where there are usually 15-18 patrollers ready to respond to anything in the vicinity.

Pucci says the Schweitzer response times are as short as 30 seconds and as long as 2.5 minutes. The patrollers ski to the rescue wearing a vest with first aid and medical gear in its pockets. There’s also a radio and 170 feet of rope in a back pocket with some self-rescue gear.

“If a lift breaks down, and I’m on the lift, I need to get off the lift to help the other patrollers evacuate the customers, so I have my own rope to rappel down, then I can help. A patroller stuck on a lift is pretty much worthless,” he says with a laugh.

A typical call might be a knee injury on the slope of Big Timber. “I know I’m taking a shovel with me because it’s very steep terrain. We rarely work on flat ground. I know when I get there I’ll have to dig a flat spot so when my brother or sister gets there, we’ll have a place to get the toboggan secured,” Pucci says.

When someone refers to his co-workers as siblings, you know it’s a tight group. There’s not much turnover on ski patrols, so people sometimes work together for decades.

“Our group has worked together 20, 30, 40 years, and the core group of people are so strong and good at what they do, it makes the rest of us want to keep getting better and better and giving the best customer service that we can,” Pucci says.

Though the weather can be intense, Pucci said the hardest part of his job isn’t the wind, the cold, the snow or even the injuries.

“First aid and medical treatment is automatic,” he says. “There’s not a whole lot of, ‘Hmmm, what should I do now?’ type of thing. You just know what you’ve got to do. You treat what you see.

“Having mom or dad standing over you while you’re working on their child, that’s probably the hardest part of being on a call … On a serious call, we’ll have three or four patrolmen working on the patient, and we’ll have another patroller with the parent, explaining what we’re doing and why we’re doing it,” Pucci says.

One of the perks of the job for Pucci is there’s no desk-sitting and very little pencil-pushing.

“I love knowing that every morning I get to get up and help people. I have a job that’s not going to work and sitting in an office by myself,” Pucci says. “Getting to make a difference is my favorite part.”

When skiing or snowboarding, abide by the ski area’s Responsibility Code from the National Ski Areas Association, which includes:

“Respect the ski responsibility rules, don’t speed through slow zones or over blind zones, read the Terrain Park rules. And skiing with a buddy is huge. Just respect your fellow skier. Those tips would keep a lot of people out of trouble,” says Jonah Pucci, Schweitzer Mountain Ski Patrol captain.