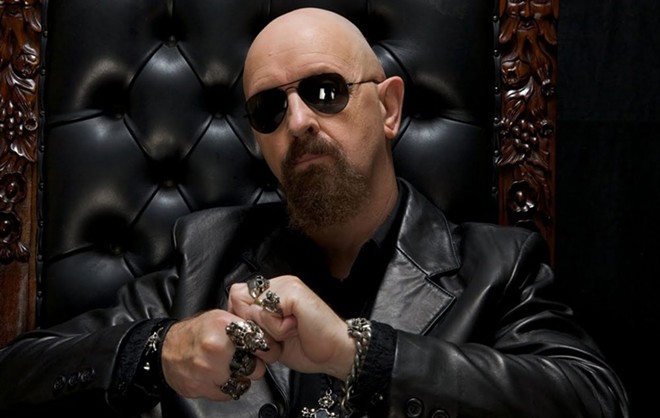 As I was preparing to interview Judas Priest lead singer Rob Halford for this week's music feature, I took a cruise through the Metal God's Instagram feed, which is a surprising and often hilarious collection of historic photos of the band, life on the road mementos and pictures of Halford wearing cat T-shirts. Really.

Judas Priest's Rob Halford on writing new music, finding his voice and rocking to the dawn

One of the old photos that caught my eye was one of Halford holding a Budweiser backstage at Live Aid, the massive charity concert in 1985 that took place in London and Philadelphia to raise money for African famine relief. While I was just in grade school at the time, I definitely remember Live Aid thanks to performances by the likes of Led Zeppelin (with Phil Collins on drums), U2, Tina Turner and Mick Jagger, among many more. Having yet to embrace metal music, I didn't remember Judas Priest taking part, so I asked Halford about it.

He remembered the day vividly, and while his tale didn't make my preview of the band's show Wednesday at Northern Quest Resort & Casino, I'll relay it here.

"I just put that picture up for a Throwback Thursday on Instagram," Halford told the Inlander. "I'm holding a Budweiser, and that was 33-something years ago or more because just after Live Aid I started my path of sobriety."

Judas Priest played three songs at Live Aid — "Living After Midnight," "You've Got Another Thing Comin'" and their cover of Fleetwood Mac's "The Green Manalishi (With the Two Prong Crown)." It was a cover song Priest didn't play that day, though, that gave Halford his biggest Live Aid memory.

Judas Priest covered Joan Baez's "Diamonds & Rust" on their 1977 album Sin After Sin. And the song has remained a live staple of Priest shows ever since. Backstage at Live Aid in Philadelphia, Halford saw Baez making a beeline his direction after Judas Priest's set.

"I go, 'Oh no, she's pissed because we did "Diamonds and Rust,"'" Halford recalled. "And she actually came up to me saying, 'Rob, I just want to say thank you for what you did with 'Diamonds & Rust.' And I go, 'Well, that's really great, Joan, I really appreciate it, that's so cool.' And she goes, 'Yeah, because my son is a big Judas Priest fan, and he liked your version better than he likes my version.'"

"How great is that," Halford continued. "She's a giant in music! And as the day went on, I'm hanging out with Jack Nicholson, and I'm just like a kid in a candy story. My jaw's dropping. 'Oh my God, it's Jack Nicholson!' And we ended up going to a couple of parties together. It was just a wonderful, wonderful day."