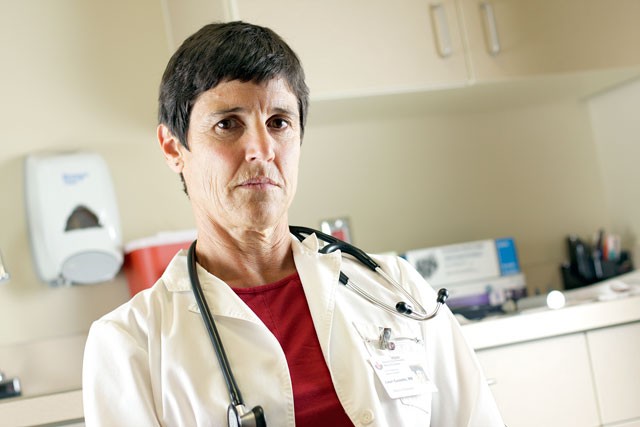 Family practice doctor Lauri Costello left her practice due to the emotional stress of a lawsuit.

Lauri Costello, a family practice physician in Spokane, was already frustrated with the world of medicine. She was irked by the red tape and bureaucracy and dealing with insurance companies. Then a patient — a woman who’d had a stroke — sued her practice. Thanks to a gag clause, she says she can’t get into the details.

“I took it personally,” Costello says. She thought the lawsuit was frivolous, that the judge would toss it. He didn’t. With that, Costello left her practice. It wasn’t just because of the money.

“I honestly think it was more the emotional cost, and the implication that the doctor was responsible for whenever something went wrong, whenever someone had a medical problem,” says Costello, who now works as a freelance surgery assistant.

All doctors have to pay a pricey premium to prepare for the possibility they may someday be sued. Gary Morse is general counsel with Physician’s Insurance, the largest medical malpractice insurance company in the state of Washington. For a general practitioner, he estimates, malpractice insurance can cost between $8,000 and $12,000 a year. But for, say, a neurologist, it can soar to $50,000 or $60,000 a year.

Supporters of medical malpractice lawsuits say their right to sue is not only constitutionally protected, it results in safer care. But Costello says it isn’t the threat of a lawsuit that keeps doctors from harming their patients.

“The docs I know beat themselves up ad nauseum, even when a patient has a good outcome,” Costello says. “When there’s a bad outcome, if there’s something you could have been done better, you’re continually beating yourself up.”

“The lawsuit is an issue of long-term involvement,” says John-Henry Pfifferling. For doctors, it happens “in an environment that is alien. It is a theater, and you are not a skilled actor in the drama of litigation stuff.” The legal culture makes it even worse. “You’re told by your attorney, ‘Don’t talk to anybody about the case,’ at the same time that you’re having all these feelings: anger, distress, rage, violation, humiliation.”

And the medical culture doesn’t help either. “Real doctors don’t talk about their feelings — that’s going against the culture.”

He suggests that doctors understand the drawn-out legal calendar. After months of no action, “Suddenly, you have to be at such and such place at such and such a time and they don’t care that you’ve got five operations that day.” Establishing a policy of what he calls “enhanced collegiality” can help. He suggests practices determine what they are going to do be there for other practitioners. Things as simple as making sure a doctor shaken up after a morning deposition doesn’t have to see patients for the rest of the day.

Pffiferling says a colleague’s non-judgmental ear can always help a doctor let off steam. “You can certainly be available for sharing their feelings. You’re not their therapist, but you are someone to support your colleague in the uncertainty.”