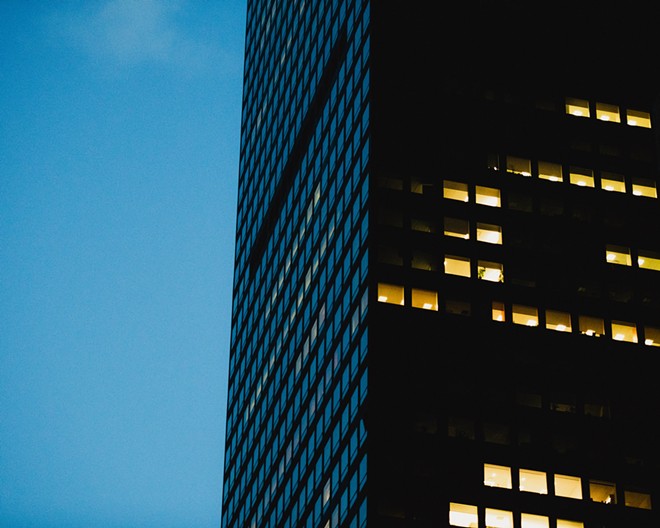 George Etheredge/The New York Times
Lights glow at dusk in a few offices of a skyscraper in midtown Manhattan on May 4, 2020. With the coronavirus still surging in some parts of the country, a growing number of employers are delaying return-to-office dates once again, to the summer of 2021 at the earliest.
By Gillian Friedman and Kellen Browning
The New York Times Company

When the coronavirus pandemic shuttered offices around the United States in March, many companies told their employees that it would be only a short hiatus away from headquarters.

Workers, they said, would be back in their cubicles within a matter of weeks. Weeks turned into September. Then September turned into January. And now, with the virus still surging in some parts of the country, a growing number of employers are delaying return-to-office dates once again, to the summer of 2021 at the earliest.

Google was one of the first to announce that July 2021 was its return-to-office date. Uber, Slack and Airbnb soon jumped on the bandwagon. In the past week, Microsoft, Target, Ford Motor Co. and The New York Times said they, too, had postponed the return of in-person work to next summer and acknowledged the inevitable: The pandemic isn’t going away anytime soon.

“Let’s just bite the bullet,” said Joan Burke, the chief people officer of DocuSign in San Francisco. In August, her company, which manages electronic document signatures, decided it would allow its 5,200 employees to work from home until June 2021.

“We’re still in a place where this is evolving,” she said. “None of us have all the answers.” Carlos Chavarría/The New York Times
Employees in pre-pandemic times at the headquarters of Slack in San Francisco, Feb. 7, 2017. Most Slack employees have said they would like to have a mix of at-home and office work even after the pandemic subsides.
Many more companies are expected to delay their return-to-office dates to keep workers safe. And workers said they were in no rush to go back, with 73% of U.S. employees fearing that being in their workplace could pose a risk to their personal health and safety, according to a study by Wakefield Research commissioned by Envoy, a workplace technology company.
More companies are also saying that they will institute permanent work-from-home policies so employees do not ever have to come into the office again.

In May, Facebook was one of the first to announce that it would allow many employees to work remotely even after the pandemic. Twitter, Coinbase and Shopify have also said they would do so. On Friday, Microsoft announced it would also be part of that shift.