The Judge hopes that emotional response overwhelms your logical objections 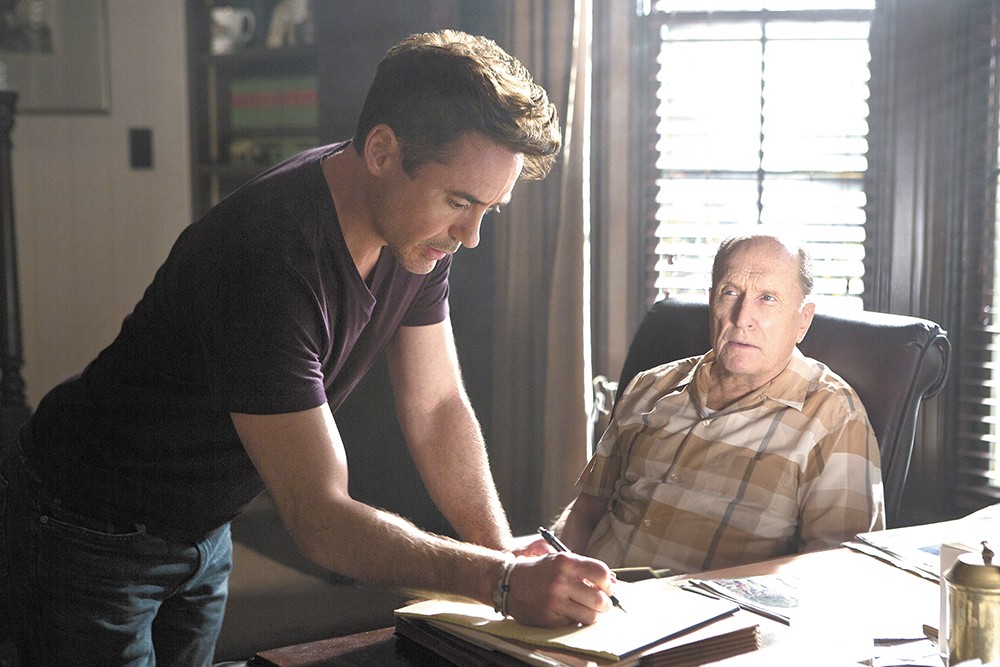 While watching The Judge,

I found myself considering how much the process of thinking critically about a movie is like being a member of a trial jury. An inner voir dire tells you that you're supposed to be considering the matter at hand rationally and objectively. At the same time, a filmmaker — much like an effective attorney — is often more concerned with shifting your sympathies by appealing to a particular emotional response. It's no longer about "just the facts"; they'd much rather have "just the feels."

Of course it's silly to think those two elements aren't always intertwined in our responses to art, yet there are also times when you want to resist the jerking of your strings more than you actually end up resisting. In a whole lot of ways, The Judge is a steaming mess of a movie, overstuffed and brimming with a sense of its own dramatic importance. And then there's that thing where simply watching two great actors wrestle with a complex father-and-son dynamic makes parts of it hard to resist.

It's even more aggravating when The Judge opens with such a bald-faced suggestion that it understands its own manipulations. Hotshot attorney Hank Palmer (Robert Downey Jr.), defending a corporate weasel, is followed into the courthouse bathroom by the prosecutor (David Krumholtz), whereupon Palmer makes note of the cliché of the prosecutor following the defense attorney into the bathroom, and the cliché of the prosecutor asking the defense attorney how he sleeps at night knowing he's helping a guilty man escape justice. Check us out, the filmmakers assure us; we get how you expect this to play out, and we're not gonna do you like that.

But do us like that, they do. The central plot finds Hank traveling to his rural Indiana hometown for his mother's funeral, where he sees his estranged father, Joseph (Robert Duvall), for the first time in years. A respected veteran judge, Joseph is also about to find himself on the receiving end of a murder charge — the victim is a convicted murderer whose crime was made possible by Joseph's leniency — and thus the angry son and the prickly father must work together and possibly come to respect one another and so on and so forth.

The fact that it works at all is almost entirely thanks to the men playing the roles. Downey could play this kind of slick fast-talker in his sleep, but he manages to find something genuinely wounded in a successful man returning to the place where he was simply the local adolescent screw-up. And Duvall turns Joseph's moral rigidity into both a blessing and a curse, invoking his hard-nosed dad character from The Great Santini without making it feel like he's simply repeating himself. They're terrific together, including a wonderful scene where Joseph at last allows Hank to come to his aid when he's at his most vulnerable. Even when the big, tearful finale between them arrives, it ends on a surprisingly edgy note.

If The Judge had been able to keep its focus on that relationship, it might have been easier simply to roll with its big "Cat's in the Cradle" tearjerking. But the story by director David Dobkin (Wedding Crashers) and screenwriter Nick Schenk (Gran Torino) wanders all over the place over the course of 140 minutes, attempting to explore Hank's relationships with too many other characters: his two brothers (Vincent D'Onofrio and Jeremy Strong); his young daughter (Emma Tremblay) as his own marriage crumbles; his high-school girlfriend, Samantha (Vera Farmiga), including a bizarre subplot in which Hank makes out with Samantha's daughter and then has to wonder whether she's actually his daughter. The Judge keeps trotting out characters like witnesses, never understanding how few of them are actually necessary to make the story's case.

It all builds, as one might expect, to a courtroom finale, shot by cinematographer and longtime Spielberg collaborator Janusz Kaminski with enough radiant backlighting to make every character look like a heavenly apparition, and featuring the kind of witness-stand moment that exists only in movies of this kind. In your brain, you know how ridiculous and overwrought it all is. And in your gut, it might still work just a little bit anyway. ♦

The Judge is not showing in any theaters in the area.