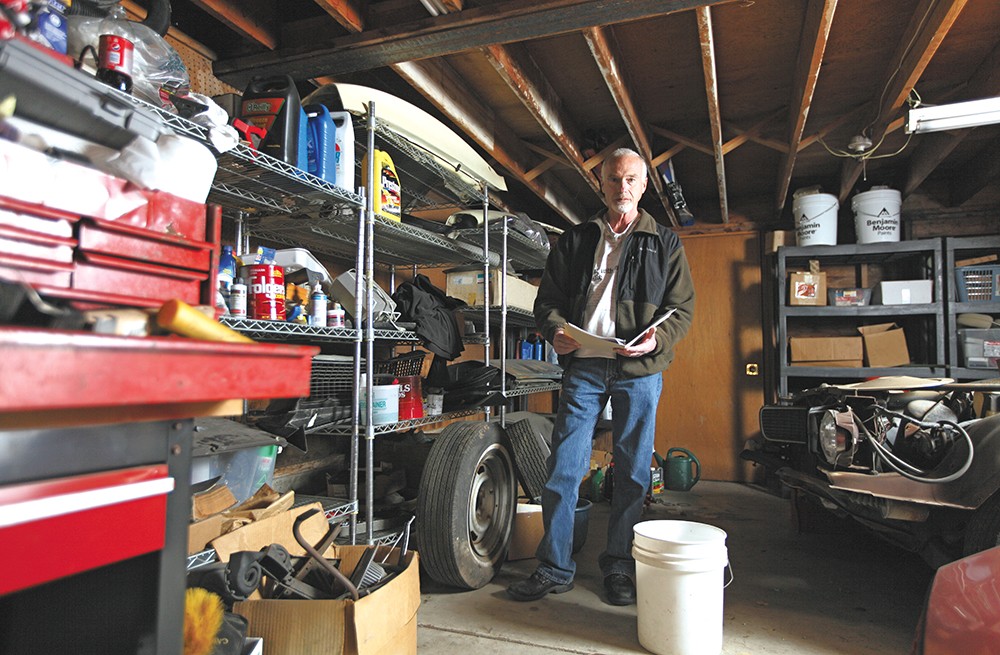 Young Kwak
Gregg Sowder has struggled to get investigators on his case after his garage was burglarized in July.

Along the short walk from his garage to his South Hill home, Gregg Sowder performed a simple daily ritual for more than a decade. Each evening, he emptied his pocket change into a white, five-gallon plastic bucket by the door as he passed, watching his collection slowly grow year by year.

Sowder, 60, with a trim goatee and glasses, never bothered to count the coins. But at more than half full, he estimates the bucket weighed more than 100 pounds. So he put off taking it to the bank, and put it off, and put it off, until July 5, when it disappeared.

A chainsaw had also been stolen. When he searched his property, he found a jewelry box discarded in his backyard. So he did what he was supposed to do — he reported the burglary to the Spokane Police Department.

But then he went a little further.

"What would a bunch of lowlifes do?" he thought. Soon, he had gone around to all the local grocery stores with Coinstar change-sorting machines, asking about large deposits.

As it happens, the Albertsons on 57th Avenue told him two people had hauled in a white bucket of change on July 5. They left with $824 in converted cash. The store's security cameras captured the whole transaction.

Even armed with those strong leads, Sowder says he has had a hard time getting follow-up action from Spokane investigators. He says it took multiple calls to get his case assigned to a detective. He then had the store send over the security footage. He also took the jewelry box in for fingerprinting. But he hasn't heard back about the case in weeks.

Sowder joins dozens of other frustrated citizens who have watched their cases fall by the wayside amid the city's flood of property crime reports. Some have collected evidence themselves to give police. Some have filed tips and never heard any response. Others say officers responded, but explained there was nothing that could be done.

Police officials say they value all information from the public and strive to make sure investigators follow through on as many cases as possible. Citizen reports also help investigators track citywide crime trends, so they can implement more preventative enforcement strategies.

"I realize that the police department is swamped with property crimes," Sowder says. "I've been patient and tried not to be too much of a pest, but at the same time not just let it slide."

Spokane Police Department records show more than 15,644 property crimes reported so far this year, including 415 just last week. Police Chief Frank Straub and top commanders have acknowledged frustrations with the city's increased property crime rates, as well as staffing shortages that can leave street officers hustling from one call to the next.

Stretched between those two challenges, police officials say they cannot always respond to every call for service. Officers have to prioritize life-threatening, high-risk and in-progress calls. Sometimes the department does not have people to spare for non-emergency incidents. Often, a complaint does not require the immediate presence of an officer.

More than half of the citizen complaints filed with the city's Office of the Police Ombudsman fall under the broad category of "inadequate response." At least 53 of the 90 complaints filed from January through September of this year accuse officers of not responding or not conducting a thorough enough investigation.

Ombudsman Tim Burns says response complaints spiked in 2011 when the SPD announced they had closed the Property Crimes Unit and cut investigations. Officials have since retracted that decision, but resources still limit investigators to a small percentage of the total reported cases.

"Typically, the police response is, 'It doesn't meet our threshold,'" Burns says. "If you're the victim, that's not what you want to hear, and that's understandable."

The ombudsman also noted a sharp increase in the number of police calls being categorized as "non-response," which either do not require an officer immediately or where officers are not available. In the first six months of 2013, nearly 5,180 calls fell into this category, up from 3,595 during the first half of 2012.

When Sowder first contacted the department, investigators were quite courteous. But he says they also made it clear his case had "zero" chance of much follow-up. ("I got a lot of 'No's' down there.") So he started his own case file, posted reward fliers and made persistent calls to get his case assigned to a detective.

"You have to be your own advocate and bring them all the stuff that you have," he says, flipping through a folder of case records and handwritten notes. "Just be real respectful, but at the same time expect some help. ... Most people just give up. They make the report and then nothing happens and they just say, 'To hell with it.' I'm sure that's what happens."

Sitting in the recently established downtown substation, SPD Capt. Judi Carl says the department has worked hard to make investigators more accessible while taking advantage of new technology to improve the timely sharing of crime tips and other community intelligence.

With more than 16,800 overall crimes reported this year and more than 3,410 tips submitted to Crime Check, inadequate response complaints reflect just a small percentage of all SPD calls.

Carl says department supervisors work quickly to sort phone calls, emails, in-person tips and other reports to make sure information from the public gets to the officers who need it.

Police spokeswoman Monique Cotton says citizens now have more ways than ever to contact police and share information. The department works closely with 911 and Crime Check. It also revamped its tip line in February, adding an email program so citizens can attach photos or video with their tips.

"We rely on the public a lot," she says, adding, "We need them to know that we're accessible."

Carl says citizens should not hesitate to contact officers with information on crimes, suspects, community problems or other issues. Even if they don't hear back from investigators, their information could help break open big cases.

"We don't call back each individual person," Carl says. "We use some of it. We don't use all of it. ... [But] they are not ignored. They are not disregarded."

With new advances in security technology, citizens have found it easier to collect their own evidence to give police. Some might install surveillance cameras. Some might use an app to track their stolen cellphone. Many scour online sales hubs like eBay or Craigslist, searching for their missing property.

Earlier this month, KREM 2 featured a story on Spokane used car dealer Rick Harter, who had nearly $4,000 in furniture and appliances stolen out of a house he was renovating on East Lyons Avenue. With a little luck, Harter managed to find some of his property through a Craigslist post and lead police to the sellers.

Harter tells the Inlander he regularly searches Craigslist for new appliances for some of his home remodeling. When he called a couple of weeks ago about a refrigerator, the seller explained they had sold that model, but sent him a photo of another unit — the missing fridge from his house on Lyons.

"It's quite the scam," he says of the "bait and switch" between what they posted and what they actually wanted to sell.

Harter had previously reported his burglary to police and while he says officers were helpful and empathetic, he had not heard anything back. So he went to check out the fridge himself, finding some of his other stolen property stored alongside the fridge.

When he called police with the specific location, he says he was told officers would not be available for at least three hours. He says he stalled the seller and tried getting officers to help him recover his property again the following day, waiting another four hours before they arrived with a search warrant.

"I never would have gotten any of that stuff back [otherwise]," he says now. "They prioritize their calls. My thing wasn't a priority. ... I was about ready to take the law into my own hands."

Investigators have since reassured him arrests are pending in the case. While it's not the first time he has faced frustrations over a case with local police, Harter acknowledges officers provide an important and difficult service. But, he adds, they get paid well to do their best.

"You expect a high amount of service," he says. "You expect that when you call, you're going to get a response."

Police officials say they understand and share some citizens' frustrations. While Carl acknowledges people who feel ignored might be tempted to take the law into their own hands, she says that has never been acceptable. Even if technology makes it easier to track down criminals, citizens still need to leave police work to the police.

"You're responsible for your own behavior," she says. "Don't cross those lines."

Burns says Chief Straub, the mayor and city council seem to understand they need to find the resources to improve how the department responds to calls. They can't continue blaming the issue on insufficient staffing.

"The community no longer has a willingness to accept that as an explanation," Burns says.

Sowder says he would still like to know what has delayed his case so long, but he's heard enough similar stories by now to not take it personally. He just keeps filing his notes away in his case folder. He has tried to make his home a harder target for criminals. And he has ended his long ritual of collecting loose change.

"I lock everything up now and put up bars," he says. "I'm not going to have any more buckets full of change just sitting around." ♦

To report a quality of life issue or complaint: Call the SPD Tip Line at (509) 242-TIPS (8477) or email at spdtipline@spokanepolice.org.