By Mitch Ryals and Samantha Wohlfeil 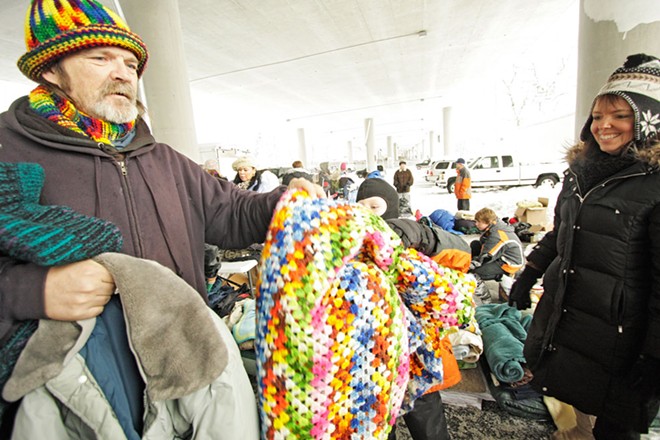 Young Kwak
The Blessings Under the Bridge group has been asked by the City of Spokane to move where it helps the local homeless population.

A white man who shot a black man in the back was acquitted of murder charges in Spokane last week by an all-white, 12-person jury. EDWARD BUSHNELL told police he was riding his skateboard in East Central Spokane in July 2015 when he heard a woman scream. Bushnell approached William Poindexter and his girlfriend in an attempt to stop Poindexter from beating her. The two men got into a fight, leaving Bushnell with a bloody gash on his face. As Poindexter and the woman walked away, Bushnell pulled out a handgun and shot Poindexter twice in the back from about 30 feet away, killing him.

The jury, in its decision to clear Bushnell of murder charges, ruled that the former Army National Guard soldier acted in self-defense.

The decision sparked outrage from some community members, who gathered last Saturday at Morning Star Baptist Church. Rev. Walter Kendricks suggested that the Department of Justice review the case. Sandy Williams, publisher of Spokane's Black Lens paper, started a GoFundMe campaign to raise money for the trial transcript, which could cost as much as $3,000. (As of press time Tuesday, the campaign had raised $3,705 in three days.)

Beyond the community meeting, online commenters have debated over the degree to which the men's races played a role in the initial altercation and subsequent acquittal.

Rob Cossey, Bushnell's defense attorney, rejected the idea that his client's actions were racially motivated. "Baloney," Cossey says. "To say it was racially motivated in this case is ridiculous. I'm not saying he deserved to die, but no one is talking about [Poindexter's] assault of that woman and his criminal record."

Williams, for her part, published an article shortly after Poindexter's death, quoting his friends' pleas for justice.

"I want people to know that William was a good dude," Jemell Cuthbert told Williams. "He didn't deserve what happened to him. I want justice." (MITCH RYALS)

The city of Spokane wants the group BLESSINGS UNDER THE BRIDGE to move from the spot where it has provided homeless people and those in need with meals and other services every week for the past few years.

The nonprofit and its volunteers provide meals, pet food, groceries, hygiene products, clothing and more Wednesday nights at 6 under the I-90 overpass at Fourth and McClellan, a space they pay the city a small amount to use.

But while the events help hundreds of people every week, which the city supports, there also have been reports of aggressive behavior, loitering and litter left in the area, which the city pays crews to clean up, says Jonathan Mallahan, director of the city's neighborhood and business services department.

Complaints have come in from nearby businesses and the principal of Lewis and Clark High School that these issues last through the week, Mallahan told Spokane City Council on Monday. The city sent the nonprofit a letter on Friday, May 12, asking them to find a new spot within 120 days.

Blessings met with the city Tuesday morning to talk about issues with the request to move, including the fact that their name is tied to that location, Mallahan says.

"We have some things to work through to make sure the character of the special and unique services Blessings provides is preserved," Mallahan says.

The groups will meet again next week to talk about alternate sites. (SAMANTHA WOHLFEIL)