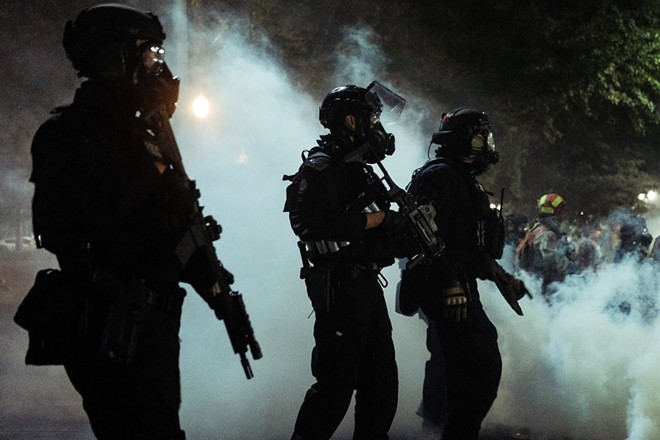 WASHINGTON — Attorney General William Barr escalated the Trump administration’s attacks on Democratic-led cities Monday by threatening to withhold federal funding from New York, Seattle and Portland, Oregon, over their responses to protests against police brutality, portraying them as inadequate as President Donald Trump seeks to make the unrest a cornerstone of his reelection campaign.

The cities “permitted violence and destruction of property to persist and have refused to undertake reasonable measures to counteract criminal activities,” the Justice Department said in a statement announcing its response to a directive by the president this month to find ways to cut funding from such cities.

“We cannot allow federal tax dollars to be wasted when the safety of the citizenry hangs in the balance,” Barr said. “It is my hope that the cities identified by the Department of Justice today will reverse course and become serious about performing the basic function of government and start protecting their own citizens.”

“This is thoroughly political and unconstitutional,” the three cities said in a joint statement. “What the Trump administration is engaging in now is more of what we’ve seen all along: shirking responsibility and placing blame elsewhere to cover its failure.”

In his directive, Trump accused cities of allowing “anarchy” to take hold and said the local officials who had permitted crime to persist should face punitive financial measures.

No federal statute says “a city can have federal funding withheld based on a subjective determination by federal officials that it underenforced local law,” said Stephen I. Vladeck, a law professor at the University of Texas.

But the effort is in keeping with Trump’s attempts to shift focus on the campaign trail from his administration’s flawed response to the coronavirus pandemic to what he portrays as unmanageable levels of violent crime in U.S. cities. He has cast himself as a friend to police and Democrats as aiding and abetting lawlessness by not cracking down on violence at protests.