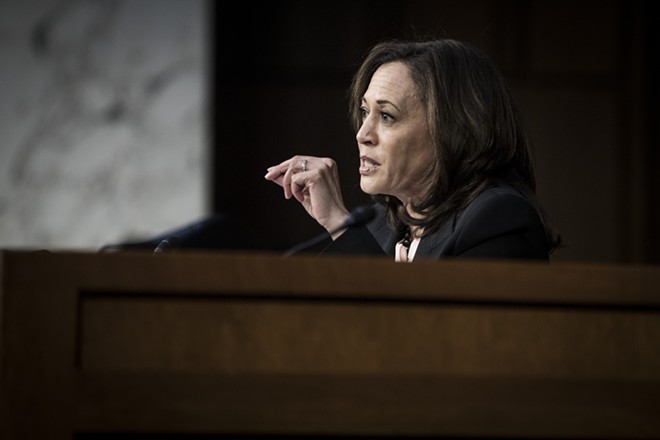 On Tuesday, former Vice President Joe Biden selected Sen. Kamala Harris, D-Calif., as his vice presidential running mate. We’ve collected some of the best stories on Harris to get you up to speed on the candidate.

Drawing on interviews with people inside and outside her campaign, Christopher Cadelago charted Harris’ parabolic bid for president, from its initial momentum to its floundering final month. He connects her past races, particularly her 2010 bid for California attorney general against Republican Steve Cooley, to help explain her present. Cadelago followed up in December for a look at how Harris’ campaign eventually unraveled, both financially and with clashing advisers.

While this piece was published days before Harris dropped her 2020 bid for the presidential nomination, it reads as a post-mortem. Jonathan Martin, Astead Herndon and Alexander Burns break down her campaign’s structural pitfalls and Harris’ stumbles as she tried to find a message and to settle on a tone.

“Kamala Harris once went after Joe Biden, but now there’s only bonhomie as the vice presidential tryouts continue,” The Washington Post, June 2020

How did Harris and Biden, who memorably sparred on the Democratic debate stage in Detroit over busing and desegregation, turn tension into a ticket? Sean Sullivan and Annie Linskey cover the evolution of Harris’ relationship with Biden, from their debate swipes to Harris’ friendship with Biden’s late son, Beau.

Harris, who was elected to the Senate in 2016 to represent California, has been the primary sponsor for four bills that made it to the president’s desk. One bill that nearly made the list? An attempt to label lynching a federal crime. Tal Kopan explains the anti-lynching bill, cosponsored by Sens. Cory Booker of New Jersey and Tim Scott of South Carolina, and how Sen. Rand Paul of Kentucky ultimately blocked it before it was swept into a larger effort to pass law enforcement reforms.

While Harris’ Senate career has been brief, it hasn’t been short on viral moments. In 2017, she made headlines when she was interrupted during Senate Intelligence Committee hearings. During the 2018 confirmation hearing for Supreme Court Justice Brett Kavanaugh, Harris made news for her pointed, albeit sometimes shaky, lines of questioning of the nominee.

Ben Smith’s profile of Harris captures her rising star after winning her spot as California attorney general. The prophetic language in this piece predicts how the top prosecutorial job in California could launch Harris, who was cast as following an Obama mold, into the Democratic party’s spotlight.

“Kamala Harris, a ‘Top Cop’ in the Era of Black Lives Matter,” The New York Times Magazine, May 2016

No issue is more closely associated with the former prosecutor than criminal justice, and Emily Bazelon takes a magnifying glass to Harris’ track record, comparing her smart-on-crime philosophy to her work as attorney general. Bazelon gives voice to Harris’ critics, who often painted her as not going far enough on reforming the criminal justice system.

If you want to step into Harris’ shoes, rewind the clock and see how she ticked in seven years as San Francisco’s district attorney, this is the profile to read. Nina Martin, now at ProPublica, takes you behind the scenes of Harris as prosecutor. You get a sense of her personality (she’s a hugger) and style as well as the issues that drove the woman described as both “dazzling” and “intimidating.” Martin touches on Harris’ signature program on prisoner reentry and focuses on an issue that has continued to follow Harris’ campaigns: Her decision to take the death penalty off the table in the murder case of a young cop. Kyung Lah took a deep dive into that case in April 2019.

In the midst of her bid for state attorney general, this critical piece examined Harris’ claims as San Francisco’s district attorney, just as she received a number of major endorsements, including one from U.S. House Speaker Nancy Pelosi. While Harris’ overall conviction rate was high, Peter Jamison found her conviction rate for serious crimes that went to trial was relatively low. The driver for the numbers, based on interviews with attorneys and former prosecutors, was Harris’ desire to look tough on crime, according to Jamison’s reporting.

This early look at Harris’ time as San Francisco’s district attorney introduces some of the threads that have defined her career, particularly her drive for higher office and her complexity as a criminal prosecutor. The piece highlights her strained relationship with the city’s police officers.

If you are trying to get to know Harris as a person, not a politician, Melissa Knowles’ interview is a good starting point. Knowles covers what inspired Harris to pursue politics (her parents’ civil rights activism), Harris’ definition of “woke” and her life and passions outside of the office. Apparently Harris can cook up a mean bolognese.

“‘I am who I am’: Kamala Harris, daughter of Indian and Jamaican immigrants, defines herself simply as ‘American,’” The Washington Post, February 2019

Harris embodies many firsts, but according to Kevin Sullivan’s profile, she does not dwell on how to categorize herself and her diverse background as the daughter of Jamaican and Indian immigrants. Sullivan describes Harris’ roots and upbringing and the intersection of her Indian and African American heritage, but notes that Harris’ own description for herself is simple: She’s American.

Want Harris in her own words? The senator published a series of op-eds in Essence, covering issues from black maternal health to white supremacy and the pandemic. Harris has also written three books, including one for children.

On the presidential campaign trail, Harris pledged her support for historically Black colleges and universities. Tanya Christian breaks down Harris’ own college days at an HBCU and how her years at Howard University in Washington, D.C., influenced her. A CBS News piece similarly highlights how much Harris credits Howard with profoundly impacting her life.