Kavanaugh, facing new allegations, vows he will not withdraw 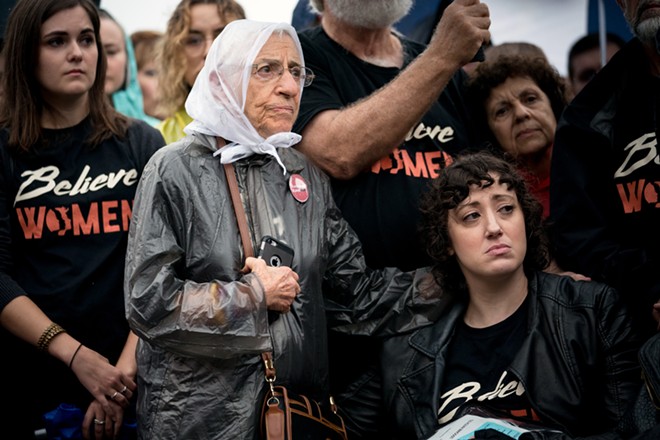 Erin Schaff/The New York Times
People gather outside the Supreme Court in Washington on Monday, Sept. 24, 2018, to protest against Judge Brett Kavanaugh's nomination to the court. The woman who has accused Kavanaugh of sexually assaulting her when they were teenagers has committed to testify before the Senate Judiciary Committee on Thursday, setting up a potentially explosive confrontation unlike any seen in decades with the future of the Supreme Court at stake.

WASHINGTON — Judge Brett M. Kavanaugh, facing mounting allegations of sexual impropriety and growing doubts over his confirmation to the Supreme Court, vowed Monday to fight the “smears,” saying he will not withdraw his nomination.

“These are smears, pure and simple. And they debase our public discourse,” he wrote in a letter to the senior Republican and Democrat on the Senate Judiciary Committee. “But they are also a threat to any man or woman who wishes to serve our country. Such grotesque and obvious character assassination — if allowed to succeed — will dissuade competent and good people of all political persuasions from service.”

Doug Mills/The New York Time
Judge Brett Kavanaugh, President Donald Trump's Supreme Court nominee, is sworn in at his confirmation hearing before the Senate Judiciary Committee in Washington, Sept. 4, 2018. According to her lawyers, Christine Blasey Ford has reached a final agreement to testify to the Judiciary Committee on Thursday, September 27, 2018, on her accusation of sexual assault against Kavanaugh.
Senior Republicans are closing ranks around the nominee, and they echoed Kavanaugh’s claims, accusing Democrats of running “a smear campaign” to derail his confirmation.

The comments from the Republicans — as well as from President Donald Trump, who told reporters on Monday that he will back Kavanaugh “all the way” — sought to put to rest speculation that the party’s support for the nominee could be cracking. In light of fresh allegations, Democrats have demanded that Republicans once again delay a hearing, now scheduled for Thursday, when one of Kavanaugh’s accusers, Christine Blasey Ford, is to testify against him. Blasey has said that the judge sexually assaulted her when they were teenagers more than 30 years ago. Kavanaugh has vigorously denied the allegation and has said he wants to testify to clear his name.

But just hours after lawyers for Blasey and Senate Judiciary Committee aides finished negotiations on the shape of Thursday’s hearing, new allegations began to surface. The New Yorker published an interview with a woman, Deborah Ramirez, who said that Kavanaugh exposed himself to her during a drunken dormitory party during their first year at Yale.