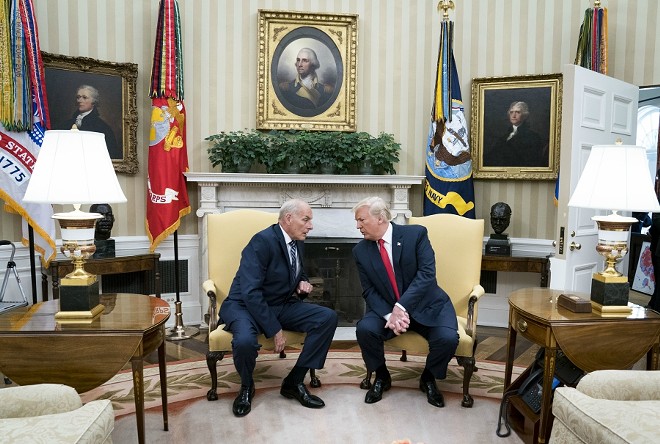 Doug Mills/The New York Times
John Kelly, the White House chief of staff, with President Donald Trump in the Oval Office of the White House in Washington, July, 31, 2017. Trump directly contradicted Kelly on Jan. 18, 2017, and said his position on building a wall between the United States and Mexico had not “evolved.”
By MAGGIE HABERMAN and JULIE HIRSCHFELD DAVIS
© 2018 New York Times News Service


The one thing sure to make President Donald Trump angry, as anyone who has ever worked closely with him knows, is any suggestion that his staff is managing him.


Yet early Wednesday evening, after learning from a White House aide that his chief of staff, John F. Kelly, had described his views about his signature campaign pledge to build a wall on the Mexico border as “not informed,” and his thinking as “evolving,” the president was initially calm.

It didn’t last. By Wednesday night, Trump had become convinced by a string of allies and friends he had talked to on the phone that Kelly had undermined him, according to people familiar with the conversations. And by Thursday morning, after digesting accounts of Kelly’s comments on cable news, the president was riled up.

As the television blared, he typed out a series of tweets that rebutted Kelly without actually naming him. “The Wall is the Wall, it has never changed or evolved from the first day I conceived of it,” Trump wrote at 6:15 a.m. Later in the morning, the president spoke to his chief of staff, and made his displeasure clear, according to two people familiar with the conversation.

The reaction was familiar to veterans of Trump’s campaign and his White House. But that kind of conflict has played out infrequently since Kelly replaced Reince Priebus as chief of staff in July. For different reasons, both Kelly and Trump have an interest in preserving their relationship, according to people close to both men.

Still, the public airing of grievances was perhaps an inevitable clash between two temperamentally similar but philosophically different alpha males who for almost six months have been nearly inseparable despite lacking any previous relationship to speak of.

Some view the relationship as dysfunctional. When a president’s chief of staff speaks to members of Congress, it should be a “consistent message,” Rep. Henry Cuellar, D-Texas, said in an interview with CNN. The inconsistency, said Cuellar, who attended the meeting Wednesday where Kelly made some of his remarks, “makes it hard” to negotiate.