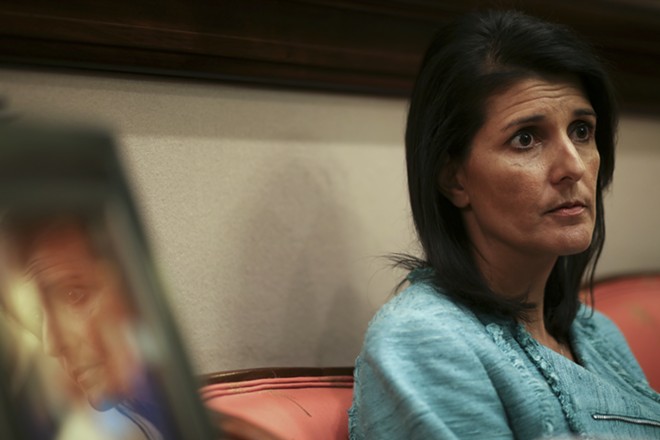 
Her remark came a day after the North’s most powerful nuclear test, and hours after South Korean officials told lawmakers that North Korea might be preparing to launch another ballistic missile to mark the anniversary this coming weekend of the founding of the North’s government.

“We have kicked the can down the road long enough,” Haley told the Council in an emergency meeting. “There is no more road left.”

Haley did not threaten unilateral military action by Washington or repeat President Donald Trump’s statement on Twitter that South Korea’s call for more diplomacy was a form of “appeasement.” She said instead that “the time has come for us to exhaust all of our diplomatic means before it’s too late.”

It was the second time in less than a week that the Security Council had met to discuss North Korea, and the 10th time it has done so this year. Last month, the council severely tightened sanctions against North Korea.

Since then, North Korea carried out one of its most provocative missile tests in recent years, hurling a ballistic missile directly over Japan that prompted the government in Tokyo to warn residents in its path to take cover. On Sunday, the North conducted its most powerful nuclear test ever, with a blast that experts said was far more destructive than the bombs that the United States dropped on the Japanese cities of Hiroshima and Nagasaki during World War II.

Koro Bessho, the Japanese ambassador to the United Nations, also stopped short of threatening imminent military action but said the danger from North Korea had been “raised to an unprecedented level” and “a grave threat to the peace and the security of the world.”

Cho Tae-yul, the South Korean ambassador, called the North’s sixth and latest test its “most dangerous yet,” describing it as “do-or-die behavior.”

Cho called for “truly biting and robust measures that Pyongyang finds really painful,” including blocking the flow of any money that might finance the North’s weapons program.