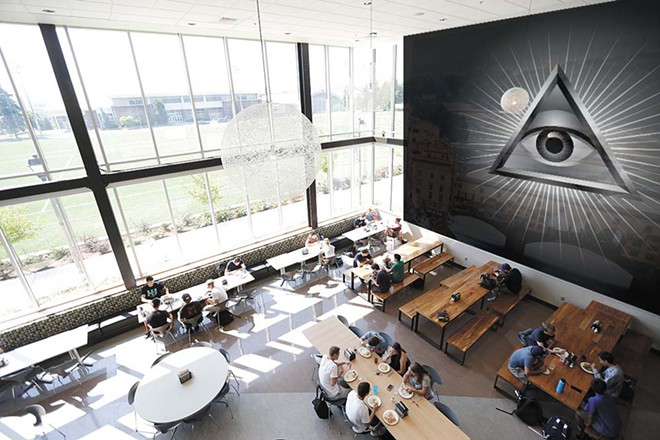 Young Kwak photo; Daniel Walters photoshop
How come nobody really questioned this clearly Photoshopped photo of Gonzaga University until now?
As journalists in a community that famously fell for Blu-ray scammers, was suckered by real estate and believed for far too long that Rachel Dolezal was black, we’ve always got to be on guard for the next big hoax.

So when investigative late-night TV host Jimmy Kimmel dropped his latest bombshell — that beloved local institution Gonzaga University might, in fact, be the biggest fraud perpetrated on American sports fans since Manti girlfriend — we took notice.

Though our competitor dedicated a big front-page splash to insisting that Gonzaga does, in fact, exist, the Spokesman-Review's business model relies so much on Zag-fan subscribers maybe they really didn’t have a choice. Is the wealthy Cowles family muzzling the Spokesman-Review's top reporters from revealing the truth?

It’s up to us, a duo of scrappy alt-weekly journalists, to pull back the latex face mask of deception to reveal the scaly lizard flesh of truth underneath.

We’re not saying conclusively that Gonzaga doesn’t exist. We’re just asking questions. So pop that red pill — after consulting with your doctor to make sure it doesn't conflict with any of your existing medications — and let's plunge down this rabbit hole together.

1. If Gonzaga is an academic institution, and not just a facade for a sports team, how come nobody ever puts out a list ranking the best Gonzaga professors to play in the NBA?

2. Even the name “Gonzaga” was ripped off from an Italian aristocrat.

3. The biggest advocates of the people who claim that “Gonzaga” exists can’t even pronounce the Italian word correctly.

5. Is Gonzaga basketball coach “Mark Few” in fact a crisis actor played by of stage and screen Kevin Bacon?

7. If Gonzaga were real, why did everyone get so defensive about Jimmy Kimmel’s “joke?” Methinks Spokane doth protest too much.

8. I, personally, have never taken a class at Gonzaga even though I’ve lived in Spokane my whole life. And neither has my Uncle Darrel.

9. Back in 1887, when Gonzaga was supposedly founded, no scientist had yet developed the technology to launch a Catholic university as far out as the Pacific Northwest. Was “Gonzaga University” actually a hoax filmed on a soundstage in 1885 by filmmakers Auguste and Louis Lumière?

10. If Gonzaga existed, there should be records of it existing. But has any journalist ever actually received request back from Gonzaga?

11. Gonzaga hired Melissa Click, the former University of Missouri assistant communications professor fired after preventing journalists from filming protests. Nobody has heard from her since.

12. Similarly, when the Jesuits wanted credibly accused predator priests to simply disappear, they claimed that they sent them to the Gonzaga campus. The Jesuit order would never put young students at risk like that without first making sure that no students were actually in the vicinity.

13. A 1998 paper in the Lancet by researcher Andrew Wakefield contained no evidence for the hypothesis that Gonzaga exists.

14. For the sake of argument, let's grant the theory that "Zaga University," used to exist. But where is it now? Vanished. Gone. Connect the dots...

15. Chick-fil-A said it was “coming soon” to Gonzaga before abruptly taking the posting down. Did they learn the truth about Gonzaga? What are they hiding?

16. Similarly, conservative pundit Ben Shapiro attempted to speak at Gonzaga, only to have America's Foundation mysteriously pull their financial support of the event. Is someone afraid of the truth?

17. If Spokane is so “poor” and “dangerous,” how could a vibrant college campus be located right in the middle of the city? Something doesn't add up!

18. Is "Gonzaga" simply a comforting opiate that keeps Spokane's residents tame and docile, preventing them from rising up and overthrowing their oppressors?

19. Despite demands from “students,” Gonzaga claimed it could not money from fossil fuel companies. Is “Gonzaga” nothing but a shell (Shell?!) company for Big Oil?

20. Gonzaga-exists-theory adherents continue to point to a “bulldog” named “Spike” as proof the school exists. Extensive photographic forensics show that this so-called dog is actually a person in an elaborate costume.

21. Nobody’s ever seen Gonzaga University and Whitworth University in the same place at the same time.

22. The active ingredients in Gonzaga are identical to .

23. Oh, so you’re telling me that Gonzaga has a star basketball team, but nobody can provide any proof of their football team even existing?

25. Gonzaga continues to refuse to release its long-form birth certificate.

26. Wild-eyed fanatics devoted to the theory that “Gonzaga exists” continue to claim that singer Bing Crosby and politician Thomas Foley attended Gonzaga. And yet both are, conveniently, dead and no one can ask them. Coincidence?

27. In a June 25, 2018, rally, President Donald Trump bashed Jimmy Kimmel as “terrible.” Was Trump trying to silence Kimmel before he could reveal the truth about Gonzaga? What does Russia know about Trump's involvement in the Gonzaga coverup? Check out this 127-tweet thread by Eric Garland for more...

29. You always hear about these “students” walking around Gonzaga’s “campus.” But see for yourself how many students are there on a Saturday in the middle of August. Not one.

30. State agents seized hundreds of fake IDs from Gonzaga students seven years ago claiming the students used them to get alcohol, yet the mainstream media refuses to cover this scandal. Are all Gonzaga students pretending to be someone else?

32. Video evidence shows that the 2013 collapse of Gonzaga’s “COG” building was a controlled demolition.

33. Follow the money! Pull the wool from your eyes! Wake up America! Shear yourselves, Sheeple! I don't like 'em putting chemicals in the water that turn the freakin' frogs Zag!

34. You can’t spell Gonzaga University without “Q-ANON” if you turn the lowercase g backward.

35. I mean, how do we even know that “reality” itself is real? How can anyone know anything with true certainty? Even Rene Descartes’ argument that the existence of one’s self was the one truly knowable truth was called into question by philosopher David Hume.

And which “university” ostensibly teaches about both Descartes and Hume in its supposed Philosophy 413 class?

Law that would mandate comprehensive sex ed back in the Legislature