A frank look at kimchee, the millenia-old Korean delicacy no one seems to understand around here. 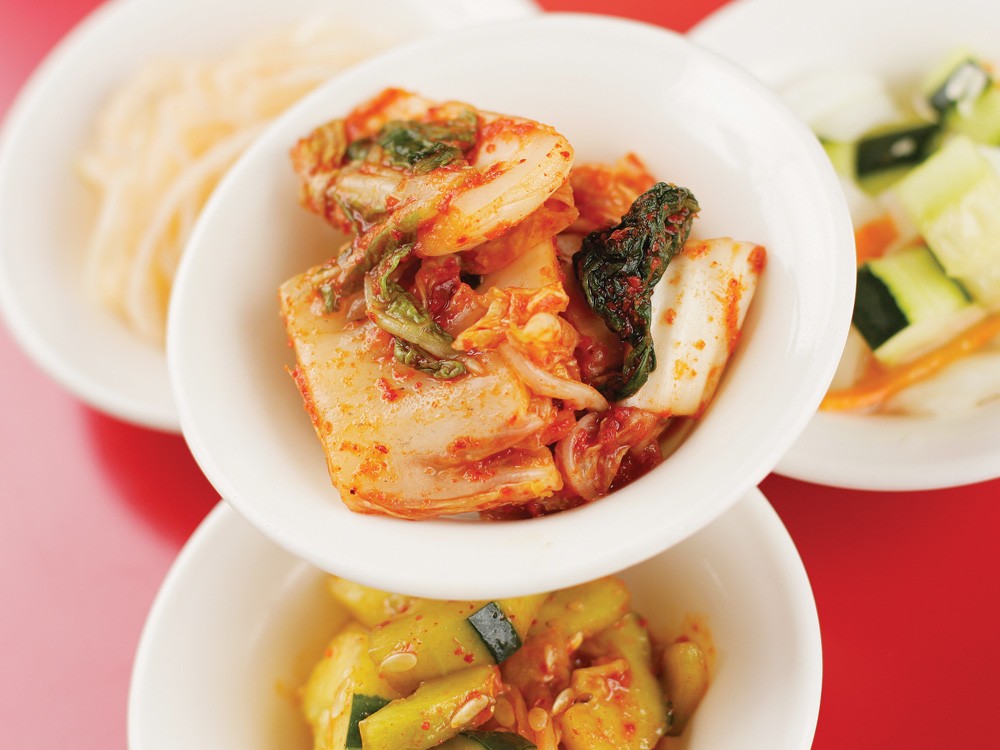 Young Kwak
Kimchee made with Napa cabbage
When Miwha Kim remembers autumn in her native Korea — memories of a time now decades gone — she sees an entire village gathering to make kimchee. She remembers sitting at the feet of her mother, surrounded by her siblings and aunts, processing by hand as many as 200 cabbages into the iconic fermented vegetable dish.

Kimchee entered the historical record 3,000 years ago and has spread to sustain the peninsular nation through every winter and famine since. A part of its strength, Kim says, lies in its diversity. Powerfully flavored, incredibly spicy and often quite sour, the taste of kimchee changes from region to region, town to town and family to family.

Miwha Kim’s family made kimchee in the way of the people of the province of Gyeongsangnam, along Korea’s southern coast, which is to say with “a lot more fish sauce than people from Seoul or the northern part.” Like their neighbors in the county of Hadong — a small pastoral oasis in a country that has rapidly and thoroughly industrialized — the Kims made it spicier than most, and saltier.

Soon Ha grew up in the countryside, too, east from Hadong along the Namhae Expressway and up the southeastern coast, in a village outside the industrial center of Ulsan. She remembers her family gathering to prepare the kimchee, too, packing it in large clay pots called danji, and storing it underground, where the temperature is consistent and cool, to ferment. No one does this any more, Ha says. Everyone uses plastic bins and refrigerators.

While some of the traditional ways of making the dish are lost, kimchee itself has blossomed in America in recent years, fueled as much by widening interest in regional cuisine as by an interest in probiotic foods — those that contain beneficial bacteria, which kimchee has in spades. In late 2010, Epicurious.com Editor-in-Chief Tanya Steel called Korean “America’s next big cuisine,” and that’s starting to bear out. A 13-part PBS doc on Korean food is in the works, and kimchee is now sold at Costco.

That last thing is both good and bad for local Korean restaurants, which still struggle to gain a toe-hold in the food scene here. Costco certainly brings name recognition, John Ha says, but it also brings lower prices and kills margins.

John is Soon Ha’s son and the chef-owner at HaHa’s Teriyaki Grill. The two make five 50-pound batches of kimchee a week Miwha and her husband, Paul, feel the same way. Paul owns and runs House of Seoul in Airway Heights. Miwha helps make the weekly batch of kimchee on Saturdays. With the amount of time it takes to make kimchee and how often he does it, Miwha says, “I don’t think Paul has a restaurant to make money.”

Paul looks up from the sink where he has been soaking Napa cabbage in a salt bath for 10 hours, shakes his head, and smiles.

The taste is the big thing. Kimchee has a flavor that can be overwhelmingly powerful. Koreans, and people who are acclimated to the intensity of the flavor, love it. There aren’t many Koreans in Spokane, though, Miwha says. “Ninetyeight percent of our customers are American.”

“Korean people like the sour kimchee and some Americans do, too,” Paul says, “but by far the most people like fresh [or unfermented] kimchee.”

So the Kims have toned down their recipe, using less spice than they would for Korean friends, and not allowing the kimchee to ferment.

“Korean food is kind of smelly,” Miwha says, “you have to get used to it.” That’s one of the reasons she thinks Korean does better in Airway Heights than in most other places in the area: It’s close to Fairchild AFB, and thus close to more Americans who have experienced Korea first-hand.

HaHa’s Teriyaki Grill is about as far as you can get from Fairchild and still be inside Spokane city limits, and John says Korean food has been a tough sell in the neighborhood. The restaurant was called HaHa’s Grill House when it opened in fall of 2009. It boasted an ambitious mix of traditional Korean dishes and Korean-American fusion.

John thought he could pull people in with items like a Korean pulled-pork sandwich, then get them to stay for the more traditional bulgogi, bibimbap and kimchee (which they allow to ferment for 3-4 weeks). Despite stellar reviews on Urbanspoon.com that netted him faithful customers who would travel from Coeur d’Alene and Spokane’s South Hill, he couldn’t attract people from his own neighborhood.

In late August, Ha ditched the fusion and picked up teriyaki. This is a tack many area restaurateurs have taken, putting Korean food on the menu next to sushi, teriyaki and other, more familiar dishes. Of the ten restaurants that serve Korean food, locally, only three really advertise that they do.

This isn’t just a problem in Spokane. John says that so many Korean people owned teriyaki joints in Seattle when he lived there that “people were starting to think it was a Korean food.”

Kimchee had a bit of a coming-out party in August, though. At the same time that John was adding teriyaki to the menu in Hillyard, he and Soon hosted a kimchee wine tasting at LeftBank Wine Bar, which paired the heat and tang of various kimchees with sweet whites, like Gewurztraminer.

The food cognoscenti showed up en masse, as did many of the beautiful people, packing the sedate space with upwards of 60 exuberant tasters. People gushed about the food, and the most potent kimchee — a richly nuanced but nose-hair-singeing five-year-old stemmed mustard leaf kimchee — sold out first.

Three weeks later, John Ha says he’s happy with the way the tasting opened people’s eyes, but he says the teriyaki has begun to do the same. “I was nervous that we wouldn’t make it, but I think teriyaki was the way to go for us in this location.”

He pauses a moment, then amends that. He still wants to run a restaurant that can function solely off the culture and creativity of modern Korean food. Teriyaki compromises that dream, but “it’s a start.”

Back at House of Seoul, Miwha Kim sits on a stool in the backroom, turning the kimchee as Paul chops and purees the elements of his own secret recipe. She reflects a moment on the way the food of Korea makes its way even into the nation’s spirituality. “It’s silly, but my mom believes that, when you’re making kimchee, you convey love through your fingers,” she says. “These days, people hunger for love because it doesn’t convey through the food.”

In Spokane, at the moment, it’s the kimchee itself that needs a little love.