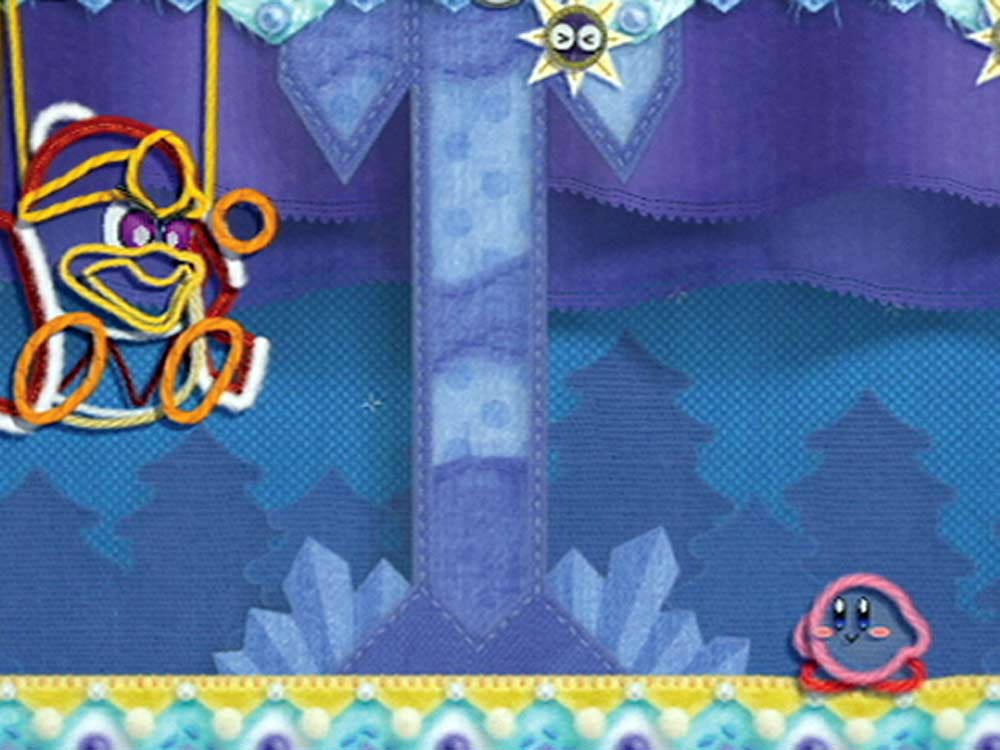 It's either a boss battle or a craft project

I think the makers of Kirby’s Epic Yarn are trying to deceive us. A name like “Epic Yarn” is bound to be confused with “Epic Mickey” by distracted parents who buy their kids “that ‘epic’ cartoon game.” And Kirby, though he is an animated hero, is a long way from anything epic in Yarn. This is a kid-friendly family pack of cotton candy. It’s an airy confection to be consumed by the idle young and the whimsical old. It is a simple, innocent, unaggressively adorable game. Better to call it Kirby’s Charming Yarn, or Kirby’s Soft, Warm Tangle of Fluff.

The premise of Kirby’s Epic Yarn is that Kirby — a pink, roundish puffball — has been transported to a world in which everything is made out of yarn or fabric. This means that every character, every building, every cloud in the sky is outlined in a thick strand of simulated yarn, somewhat like the crafts where lengths of colored yarn are glued along the outlines of pictures. The backdrops in Epic Yarn look like they’ve been cut from scraps of felt, burlap and patterned cotton, like a Bible school flannel-board scene with a pink messiah.

The fabric texture doesn’t affect much of the gameplay. Nintendo figured out how to put paper characters into a paper world full of paper puzzles in Paper Mario, but when they have to work with quilting supplies, they come up short of ideas. Occasionally Kirby will run across a zipper that he needs to unzip, or a drawstring that pleats the game’s backdrop. Clothing buttons are sewn onto the landscape for Kirby to wrap his yarn whip around and swing from a la Indiana Jones, and enemies unravel when Kirby lashes out at them. But there isn’t much activity to suggest that the yarn is anything other than an excuse to apply a pastel faux-fabric Photoshop texture.

However, this simplicity keeps Kirby’s Epic Yarn from becoming unfocused like LittleBigPlanet. The two games share more than fabric textures.

Kirby has the same Mario-style action, cooperative exploring and puzzle solving that made LittleBigPlanet an enjoyable multiplayer game. But Kirby’s Epic Yarn keeps its action even simpler. If Kirby needs to transform into a car, it just seems to happen. If he’s falling from a great height, a basic button-push morphs him automatically into a balloon. Despite its title, Yarn isn’t epic. It’s innocent. It’s easy. It’s a blast.

THE GOOD: Turned on its side, the Wii Remote is a featherweight, ergonomic mimic of the original Nintendo Entertainment System controller. Even in the era of the Kinect and motion-sensitivity, you can’t beat a D-pad and two buttons for running a videogame. Something as straightforward as Kirby’s Epic Yarn doesn’t need anything more complex.

THE BAD: One of the things that LittleBigPlanet got right was giving players the ability to extensively customize the appearance of their characters — changing their fabrics, colors and costumes, making the game’s stars personalized stand-ins for the players. In contrast, Kirby’s Epic Yarn offers players the chance to collect virtual household furnishings and then place them around Kirby’s in-game apartment. Interior decoration as personal expression? Um, no thanks.