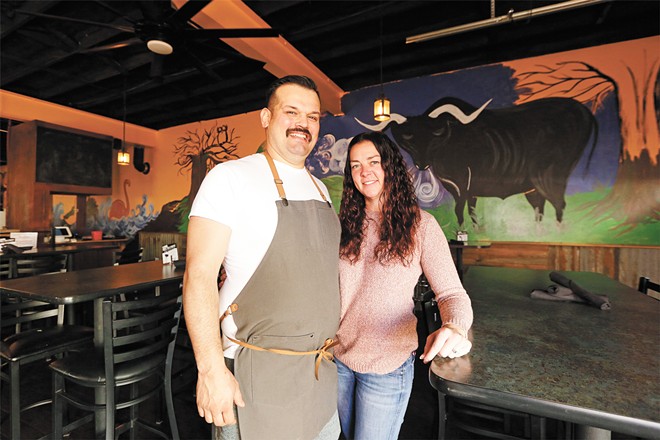 Young Kwak photo
After working at local restaurants, Daniel Gonzalez and Monica York decided to strike out on their own with Kismet.

Daniel Gonzalez and Monica York always planned to open a restaurant together, but until a series of fortunate events occurred earlier this year, they weren't sure as to how, or when.

The engaged couple met years ago while working together at a downtown restaurant, and saw their dream finally realized as Kismet opened in mid-September in the heart of Spokane's historic Hillyard neighborhood.

Focusing on Latin and Spanish-influenced cuisine, Kismet's menu is a combination of Gonzalez's Mexican and Spanish heritage and his affinity for classic French and Italian cooking techniques. Before branching out to open his own spot, the chef was in the kitchens of Adam Hegsted's Eat Good Group, starting with Wandering Table.

"I am very passionate about Latin-inspired stuff," Gonzalez says. "I got to work with Adam, and a lot of the stuff he does with gastronomy and putting these flavors together — just because something is different or weird doesn't mean we can't put it on the menu. If the food is good, people will always eat it. That is how Adam influenced me."

On the family side, Gonzalez credits his grandmothers, and recalls spending time in the kitchen with both as they made tamales while watching Mexican soap operas.

"I was always learning stuff from both of my grandmothers," he says, noting that Kismet's tamales ($15; offered with pork or veggie filling) and mole sauce are both close adaptations of their recipes.

Another homage to family is the tacos "whettos" ($14) of beef cheek barbacoa, manchego cheese, salsa and hot sauce on corn tortillas.

"My grandmothers were very, very amazing cooks, but my mother, unfortunately — bless her heart — was not the best cook growing up," Gonzalez says, laughing. "But she made these amazing tacos. They were not like real tacos, they were crispy taco [shells] with all these Mexican meats my grandmother made, and we called them 'White boy tacos.'"

So Gonzalez decided to name his version tacos whettos; whettos being Mexican slang for "White boys."

"That dish, for me, brings the essence of what we're trying to accomplish here," he says. "It took a lot of trial and error, and combines both cultures I'm from. The arepa is very Spanish — it's very light and fluffy and cheesy, and then the mole is very, very Jalisco, which is where [my family] is from. And the braised pork cheeks are influenced by Hispanic and Latin flavors, but done very fresh."

Other Latin influences on Kismet's menu include ceviche ($14), an elote salad ($11), duck confit carnitas ($18) and a pork verde sandwich ($12). More rooted in traditional Spanish cuisine is the fabada ($21), a hearty stew of white beans and braised pork cheeks so tender the meat melts in the mouth. The dish is topped with salty, crunchy, charred vegetable "breadcrumbs."

The restaurant's bar program, overseen by York, who most previously tended bar and waited tables at Elliotts an Urban Kitchen, is still a work in progress as Kismet's team gets settled. York's house margarita mix is an early standout, but more complex craft cocktails, plus weekend brunch service, are planned to debut soon.

"We wanted to make things easier while training our staff, so the drinks right now don't reflect the amount of effort that went into our food menu," York explains.

Brunch, Gonzalez says, will be different than your standard fare — less waffles and more Latin ingredients, flavors and traditional dishes.

Roughly a month since opening their doors to plenty of social media buzz, the couple are feeling even more excited to be in Hillyard.

"The people here have such a great sense of community, and are very proud of where they come from," York says. "I am really glad to be a part of this area, for sure."

The restaurant is located in a space that was last home to the short-lived Hillyard Pub & Grub, a casual spot from Tony and Raelene Elliott of Elliotts an Urban Kitchen on North Monroe. The pub opened just weeks before the first COVID-19 dining shutdown in March 2020, and after fits and starts trying to reopen, the Elliotts decided to focus on their main venture instead, Gonzalez says.

"That was kismet for us," he says. "We decided it was time. I've had an opportunity to open a restaurant before, and I passed on it, so Monica and I decided if we were going to do it, and considering we were working as many hours already [at other peoples' restaurants], that we should put that time into an investment of our own."

While still working for their previous employers, the couple squeezed in time to renovate Kismet's new home. They installed new kitchen equipment, rebuilt a patio and painted the walls with bright colors and murals. A roll-up garage door facing the sidewalk lets in fresh air when it's warm, and seating at the bar gives an up-close look into the kitchen's process.

Kismet is one of a handful of new eateries and bars to lately open in the Hillyard area — the Bad Seed in the old Hillyard library building is also new, and a couple other projects are in the works — bringing a renewed sense of vitality to the east Spokane neighborhood that embraces its scrappy local reputation and railyard roots.

"I love the challenge of going to a different spot [than downtown Spokane] and trying different things, and just wanting to be a pioneer in the food scene," Gonzalez says. "And the people in Hillyard have been very receptive and kind. It's good to have people who care about their neighborhood businesses." ♦