this two-time Ironman participant — he did his first at age 50 — creates his own doorways. A self-described adventurer whose background includes mountaineering, saber-fencing, writing and coaching, Adlard embodies the advice he shares with students: "Make a life and the living will follow."

For Adlard, life includes fitness and food. As a 15-year-old growing up in Canada, Adlard was smitten with Nadia Comaneci, the former Romanian gymnast who captured the world's attention in the 1976 Summer Olympics. Although active in soccer, curling, fencing, cross-country and badminton, Adlard didn't want to do gymnastics; he wanted to coach. Two years later he'd found a mentor at a local gym. Forty years later, he'd built a career that included coaching and running gymnastics camps and tournaments, as well as creating fitness DVDs for kids. 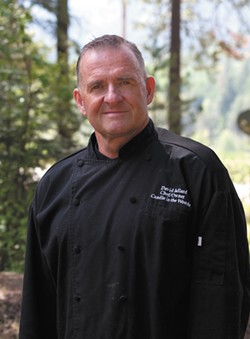 Adlard's path to high-level cuisine was similar. He'd been interested in cooking at a young age. As an adult, to immerse himself in the process, he apprenticed to a master chef who he says told him he had a lot of native ability, but "not much craft." Not only did Adlard develop his craft, as an athlete and coach, he challenged himself to come up with healthier alternatives to the chef's delicious yet rich recipes.

Although friends encouraged Adlard to open his own restaurant upon moving to Coeur d'Alene, he and wife Lisa opted instead to convert their rural North Idaho home into a dinner venue. They've operated Candle in the Woods since 2002, accommodating groups averaging from eight to 18 people. Candle in the Woods offers high-end, prix fixe meals, often paired with wines from their 4,000-bottle collection. Although the food is gourmet, the service is family-style, with an emphasis on relaxing, conversing and creating lasting friendships. One of their greatest joys, he says, is meeting people, especially through the dinners they donate to charity every year.

Adlard has also stepped in to guest cook at local restaurants, including Angelo's Ristorante in Coeur d'Alene, and took part this spring in the inaugural Chef's Week PNW, joining chefs Adam Hegsted, Molly Patrick and Travis Dickinson to create a seven-course tasting menu.

The classes, says Adlard, have been so successful that he's creating a second-level class. "There's a bit of a renaissance going on right now," says Adlard. "Food is in." ♦

At less than 200 calories per serving and containing plenty of protein, this is a beautiful and

delicious small-plate starter or shared appetizer. It can be made 1 to 2 hours ahead of time and kept chilled.

(overripe will break apart, so look for a firm one)

1) Dice fruit into pieces a quarter-inch or smaller and place in non-reactive bowl. Add jalapeño, the juice of half a lemon, the minced cilantro or parsley and mix gently. Salt to taste, mix again and set aside.

2) Mix mayonnaise and juice of lemon in a small bowl.

3) Dice tuna into one-third-inch cubes and place in a small bowl (it will be easier to dice if still partly frozen); spoon half of the mayonnaise mixture over it, sprinkle with a small amount of the Cajun-style seasoning and mix gently.

4) Dice avocado into quarter-inch pieces and place into a separate bowl; spoon the remaining mayo mixture over it, sprinkle with lemon pepper and mix gently.

5) Place ring mold onto plate or serving platter. Fill with avocado mix to just under the halfway point and level out. Drain salsa if overly runny, then spread salsa on top of the avocado and even out. Fill the remainder of the mold with the tuna mixture, pressing down gently and smoothing out. Carefully remove mold.

6) Serve at room temperature with toast points, naan or crackers.