Snapshots of three women writing, performing and finding their true voices in Spokane and beyond 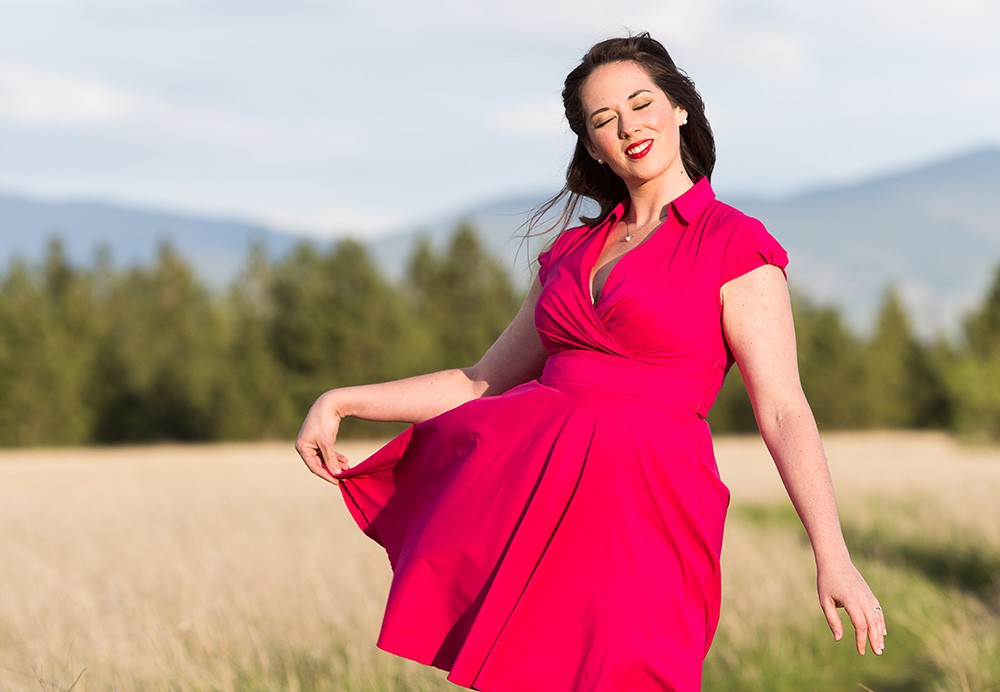 She had only the chorus in her head. When Lara James sang the lyrics "Why wouldn't I / Why wouldn't I go / Why wouldn't I / Wouldn't I try" into the phone for producer Jake Schaefer, he knew they had the title track for James' EP. Later, the rest of the song would just pour out of her, written in about five minutes in his Los Angeles studio.

Watching The Voice a couple of years ago, she found the experience almost painful. "It was a representation of what I wasn't doing," she says.

That's when the 32-year-old mother of two decided to take vocal coaching from Schaefer, the founder of Emphatic Artists Association, who just happened to be in Spokane. Her poppy, effervescent vocals won him over. When she told him she also wrote music, that was the game changer.

"I never told anyone that before," she says.

At first, the EP was going to include a couple tracks; when Why Wouldn't I dropped two weeks ago, it featured five tracks.

The shiny upright piano in her living room is new; she's learning to play it. She knows it'll help even more with the writing, which up until now she's always done vocally. When it comes to lyrics, James doesn't shy away from talking about real-life relationships in her music, ups and downs in her marriage and being away from family.

"This is a commitment as a family, and that makes me want to work harder for it," says the stay-at-home mother. "The music industry is a nightmare for anybody. It's not easy, but I'm not alone."

Mark Addy
Madeline McNeill: "I try to describe my music as high art and low grit."

Busking in front of the Garland Theater on $2.50 movie night last fall, Madeline McNeill inspired children to dance to her music, even if adults didn't. Plucking her guitar while singing a mash-up of jazz, opera and folk tunes, she defied expectations of what one would expect to hear from a street performer.

"I may have only made $8 for two hours of playing, but there were connections made there that can never be taken away," she says.

McNeill has since moved her show inside, playing mostly intimate settings around Spokane for the past six months.

Last week, when her opera singing spills out of Luxe Coffee Shop's door, a middle-aged woman walking by, talking on her cellphone, does a double take inside. Opera technique isn't often heard in such a casual setting, especially not by a woman in a retro dress with messy black hair.

"I try to describe my music as high art and low grit," says McNeill, who has written about 10 original songs. "Like the classiness of a Parisian cafe — although I've never been — with the grittiness of Spokane."

She fell in love with opera at Western Washington University, where she earned a bachelor's degree in vocal performance. Now 34, she's returned to music with a sound she knows is right. Also a sculptor and author, her whole life philosophy of a connective body and soul encompasses her art.

"I don't separate myself from everything we feel," McNeill says of her lyrics. "Instead, I shine a spotlight on the hard things."

J. Alan Paul
Nicole Lewis: "In the last year, I've found the sound that is true to who I am."

Nicole Lewis relates best to country music. Dirt roads, pickup trucks, cowboy boots — these are the things she grew up with in eastern Oregon. But in performance and on her album My Kind of Paradise, released in December, there's barely a hint of twang in her voice.

"In the last year, I've found the sound that is true to who I am," says Lewis at a local coffee shop. "My voice is not twangy naturally, so I call it more Americana."

Part of a cover act for years before deciding she wanted to make her own music, the Gonzaga alum says finding her actual voice took patience. Through listening to her vocals over and over in the recording studio, the 28-year-old finally heard her own voice.

Just back from Nashville, where she attended writer's workshops — musicians playing originals in front of each other and an audience — and recorded demos, her next step is to improve her writing.

She makes her living as a voice, piano and guitar teacher and a church music director, leaving ample time to write. Just that morning, she says she penned a new song.

With her band, which includes local veterans Mellad Abeid and Joe Brasch, Lewis has surrounded herself with talented songwriters. She hopes that all of this will one day lead to a full-blown professional career.

"That's the goal, the dream," Lewis says quietly, almost to herself. ♦

Lara James' new album can be downloaded for free at larajamesmusic.com. Madeline McNeill performs Thu, May 15, at 4 pm, at the Perry Street Market. Nicole Lewis opens for James Otto on Wed, May 21, at the Knitting Factory.