Spokane is a few hundred miles away from salt water, but we still love our oysters 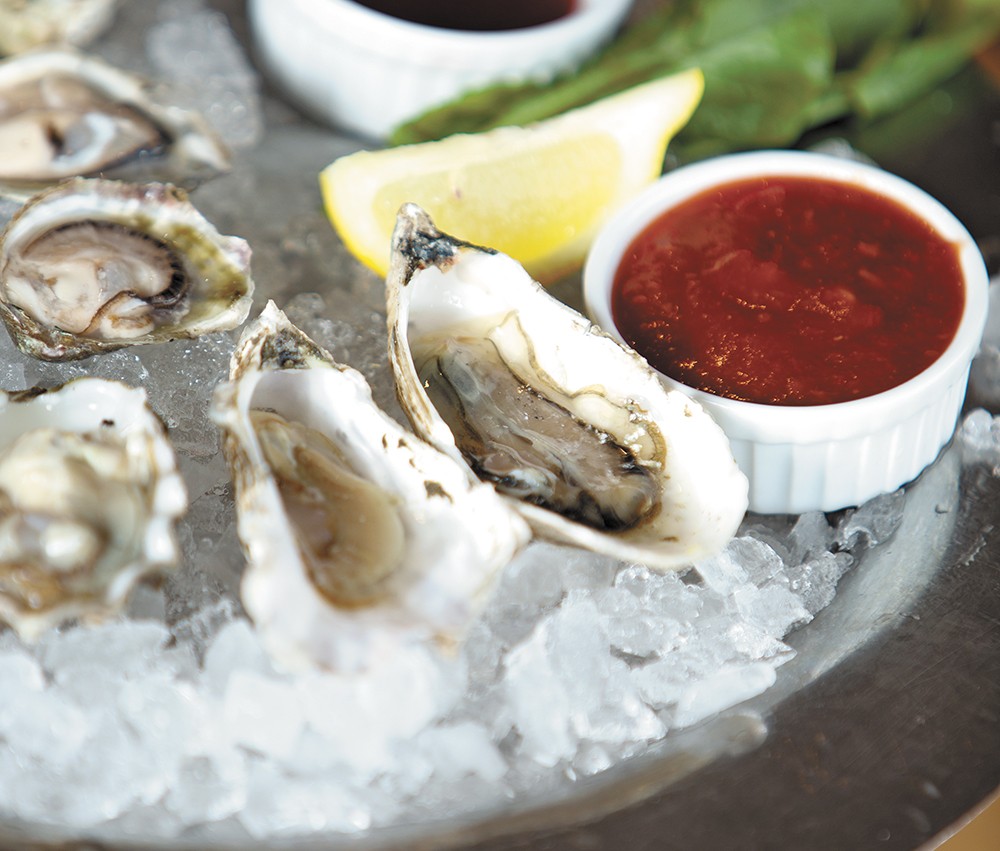 Young Kwak
An oyster sampler from Anthony's, which is celebrating an oyster festival all month.

Ancient humans devoured oysters, poets have penned adoring poems about them, and doctors, dieticians and lovers praise their benefits.

Modern humans have cultivated oysters for thousands of years. In the new world, coastal Native Americans, already utilizing the bounty of oysters in their diets, shared their harvesting skills with settlers. As an important commodity and food group, the demand for oysters inland grew rapidly as pioneers moved away from the coasts.

By the late 1800s, the Olympia oyster, the Puget Sound's singular indigenous oyster species, was traveling by stagecoach and train east to Chicago and points in between. Oysters arrived in Spokane around this time. The popularity of oysters in Spokane was demonstrated by their appearance as an elite menu item at Louis Davenport's grand restaurant of the same name. Davenport's 1909 New Year's Eve Menu included Olympia oysters prepared raw, scalloped, pan roasted, stewed and fried.

As a child, our Christmas Eve tradition included a festival of seafood, all of which was welcome except for my parents' favorite: the dreaded oyster stew. I tried my first raw oyster in my early 20s. By my late 20s, I was hooked. Unlike the sweet, candy-like predictable comfort of a diver scallop, oysters are exciting and dynamic, as they invoke the flavor of the water in which they are raised: salty or sweet, buttery or briny, coppery or fruity.

Just as my demand for oysters has increased over the years, so has the demand throughout the region. More oysters are seeded, grown, and harvested in Washington than anywhere else on the West Coast. Washington state is second in oyster production only to Louisiana, the brackish waters of Puget Sound and Hood Canal providing ideal growing grounds for an incredible variety of oysters.

Anthony's Restaurant is taking advantage of this cold-water bounty with the return of its annual March Oyster Festival. The festival menu offers numerous oyster preparations, wine pairings, bar specials, and a Friday Night Oyster Slurp at 6 pm in the lounge. On the night I visited, the half-shell offerings were abundant: Pacific Pickering Pearl, Pacific Barron Point, Pacific Kobashii, Kumamoto and Olympia. Our group ordered the Half-Shell Sampler and tried them all. The nuances of the varieties were fascinating: the Olympias, tiny, sweet, and soft, were both adorable and delectable; Kumamotos, buttery, sweet, and mild, brought back one friend's memories of her childhood on the beaches of California; the Barron Points, big and briny, were reminiscent of East Coast oysters; Kobashii were the favorite, invoking the fresh aroma of the Puget Sound and finishing with a light cucumber flavor.

Dave Hewitt, shellfish buyer for Pacific Seafood, has seen a massive increase in demand for oysters in the Inland Empire in the past three years. Kumamoto oysters are by far the most popular. Freshness is obviously important with matters of the sea, but live oysters have proven to be hearty travelers.

"Oysters are harvested in one day and shipped live. If they're closed, they're alive," says Hewitt.

Oysters have a long shelf life when properly stored — up to 10 days in cool conditions — and modern refrigeration ensures that oysters shipped from the westside are on your table the morning after they were harvested. And although the old adage to "only eat oysters in months ending with r" isn't exactly true, Hewitt definitely recommends eating oysters from January to May, when the bays are coldest.

We couldn't leave Anthony's without taking advantage of the cooked offerings. The oyster stew was brothy and buttery, perfect for a chilly early spring evening. The crispy seared oysters, served with a slightly smoky dipping sauce, made us long for a sunny day at the beach. The barbequed oysters were the shining star, achieving textural perfection on the grill and bathing in basil butter with finely diced sun-dried tomatoes.

The next stop on our search was, oddly enough, at a steakhouse. At Churchill's, our server Christina Damico confirmed that raw oysters are an incredibly popular menu item. The fresh haul of the day was limited to one type, but the Hood Canal Dabob oysters were near perfection: crisp and clean, with a hint of melon. We rounded out our evening with one final, classic preparation, Oysters Rockefeller.

Bathed and baked in butter and black licorice pastisse liqueur on a Florentine-style bed of spinach and topped with a perfectly balanced lemony hollandaise, these oysters confirmed that everyone can find a way to enjoy this remarkably versatile bivalve. ♦