How concentrated light can make you look and feel better 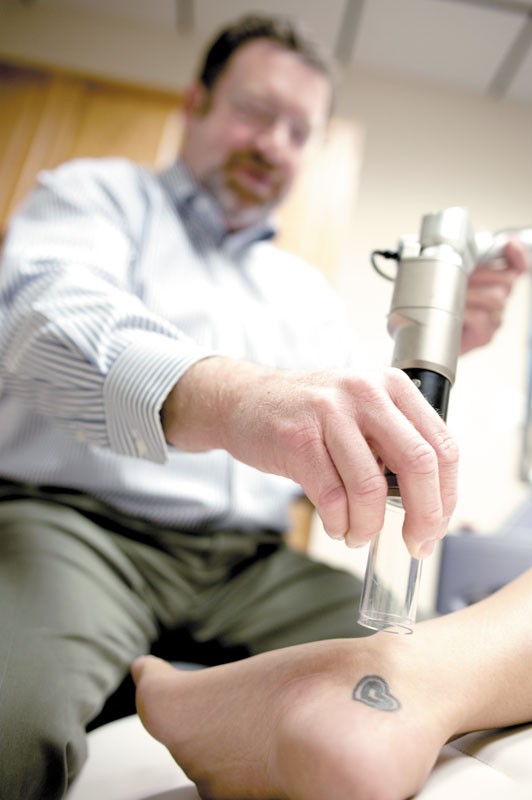 In an office with plush chairs and Michael Jackson’s “Pretty Young Thing” drifting from the speakers, patients wait to see what Dr. Kevin Johnson can do for them. Brochures promise better skin, smoother legs and flatter bellies.

Down the hall, a clicking sound comes from behind a door with a warning sign.

“Ow, that one hurt more than the last one did,” a female patient says with a nervous laugh.

Technicians are shooting cold air onto a tattoo on her butt and then landing a red beam of light on the spot. A beam of laser light separates the ink from the skin, slowly fading the image.

Like tattoo removal, many of the offerings at Johnson’s Advanced Aesthetics depend on laser technology.

Lasers use precisely focused, high-intensity light to affect cells or slice through tissue. They can destroy veins, reshape the cornea for better vision, even out skin tone or melt fat.

Just as with medications and other procedures, the U.S. Food and Drug Administration approves new laser use in medicine to ensure procedures are safe. The American Society for Laser Medicine and Surgery, an industry group that provides research and education on laser use, has more than 4,000 members representing about 50 specialties, from surgeons to biologists.

“There’s been an explosion in technology in the last 10 years,” Johnson says, “Lasers were very uncommon in medicine, and it seemed almost like Star Wars when it first started. There didn’t seem to be a big application for it. I don’t think many people thought it would really catch on. Now there are just thousands of different applications for lasers.”

At his downtown office overlooking Riverside and Howard, Johnson’s most common laser work is hair removal. For $100 to $300 a session, he’ll remove hair anywhere on the body. A highly concentrated beam of light is sent through the skin and down to the hair follicles, where the light is absorbed by the follicles, killing them. (Because hair grows in cycles, he can only kill about 30 percent of hair follicles at any given time, so multiple visits are required.)

Johnson also uses non-invasive lasers to even out skin tone and texture. Most of his lasers work from the surface of the skin, sending beams of laser light into the skin to even out dark spots, soften fine lines and wrinkles, and treat scars.

Of course it comes with a tradeoff. Because of the seriousness of the procedure, it requires about a month of preparing the skin with topical creams and maintenance. Then, it can require about a week to heal.

“It comes down to really how bad the damage is and how aggressive the patient wants to be with the treatment,” he says. “It really comes down to severity.”

Although he’s not looking to treat medical problems with his laser procedures, Johnson still sees his work as important.

“We look at this as maintenance,” he says. “People take a shower. They brush their teeth, they comb their hair, they work out, they eat right. This is the same type of thing. People want to look good.”

Johnson is even using laser technology to trim pounds. Liposuction is nothing new, but his office has begun offering laser-assisted liposuction over the past few years. In that procedure, he uses a laser under the skin to melt some fat and tighten the skin above it.

The newest light beam to hit Johnson’s office is Cellulaze, a tool just approved by the FDA in January. What makes cellulite so unsightly is the bands beneath the skin that connect the muscle to the skin, creating dimples when fat is present. Cellulaze releases those bands and melts some fat, decreasing the “lumpy” look on the skin. It’s not only revolutionary for its lasting effects (most other procedures don’t stick around longer than a few months), but for its ability to keep the skin taut afterward.

In both laser-assisted lypo-suction and the Cellulaze procedure, tightness is paramount.

“People don’t want to look like a deflated innertube after the fat is removed,” Johnson says.

The slow climb in laser use in Johnson’s office is part of a larger national trend toward using lasers for everything from looking better to helping alleviate serious medical ailments. From hair and tattoo removal to vision surgery, lasers have the potential to solve problems less invasively than other treatments.

“As physicians, we’re required to continuously educate ourselves in new technologies and not just rely on what we learned in medical school,” Johnson says. “Things move so fast that if we don’t continue to educate ourselves with new treatments, we fall behind, and our patients really suffer the consequences.”

Like those around Johnson’s office, lasers across the field of medicine work in different ways, do different amounts of damage and cure different ailments, even those that are more than cosmetic.

At the base of the South Hill, doctors at the Providence Vein Center in the Spokane Heart Institute describe how they use lasers to treat varicose veins that do more than look bad. The veins, which swell and darken, are also often broken to the point of causing severe pain. Valves inside each vein, which stop blood from draining back toward the feet after it’s pumped up to the heart, sometimes break down and quit working. That causes blood to pool inside the veins, swelling the leg and causing soreness, says Dr. Stephen Murray, a surgeon who destroys those veins with a laser.

He inserts his laser under the skin and guides it through the vein using ultrasound technology. Then he shoots a beam of laser light through the vein, collapsing it so it no longer transports blood. The body then only uses healthy, working veins for blood-fl ow, relieving the pain.

The treatment starts at around $2,700. The doctors warn patients of medical risks associated with the procedure, though the most common — phlebitis, caused by blood trapped in the collapsed vein — goes away within a couple months, Murray says.

Some people who come in for the procedure underestimate the seriousness of the pain they’re feeling and worry that laser treatments must be only for cosmetic concerns.

WHAT THE FUTURE HOLDS

Lasers have made huge strides in medicine and cosmetics, but Johnson thinks they can still get better. He’s hoping for a better surface skin-tightening laser and more effective non-ablative laser treatments. If he could give patients the results of his ablative CO2 laser without the intense recovery, “that would be a phenomenal laser.”

Murray sees researchers in his field already experimenting beyond lasers with procedures that don’t even require a break in the skin.

The technology behind work like that Johnson and Murray do is also being put to use in alternative medicine. Mari Pritzl owns Spokane Laser Pain Relief, where she uses “cold laser therapy” or “low-level light therapy” — lower-power lasers that do not produce heat — for injuries like tendonitis, ligament tears and arthritis. She charges $20 a session.

“It saddens me to hear of a diabetic who loses their toes, then a foot due to non-healing lesions. They developed [these] non-healing wounds due to the lack of circulation to the distal part of the limb. No blood flow [means] there is also no oxygen being delivered to the wound,” Pritzl writes in an email to InHealthNW. “No antibiotic taken orally will get to the wound; no topical ointment will penetrate and increase blood flow,” she claims, “but the laser will. The laser stimulates scavenger cells, creates a natural antibiotic reaction [and] stimulates the cells we need to reproduce new healthy cells.”

Work like Pritzl’s is controversial in the medical world and analysis of its effectiveness is inconclusive. The FDA approves such devices for marketing, but most insurance companies don’t cover procedures with them. The American Society for Laser Medicine and Surgery says low-level light therapy has “substantial merit as a valid therapy.” But adds, “In spite of the scientific validity of LLLT, there are still many commercial claims for devices that are not well supported and some are in fact just plain incredulous,” according to the society’s introduction of the therapy. “The message to take from this, though, is to not throw out the baby with the bathwater when confronted with some of the fringe claims of LLLT.”

For now, the expansion of laser use means more patients are interested in — and not afraid of — the procedures, doctors say.

“People see laser treatments as a common and effective way to take care of a lot of things these days,” he says.