More people want to get tattoos removed. But should someone need a medical license to use a laser to remove them? 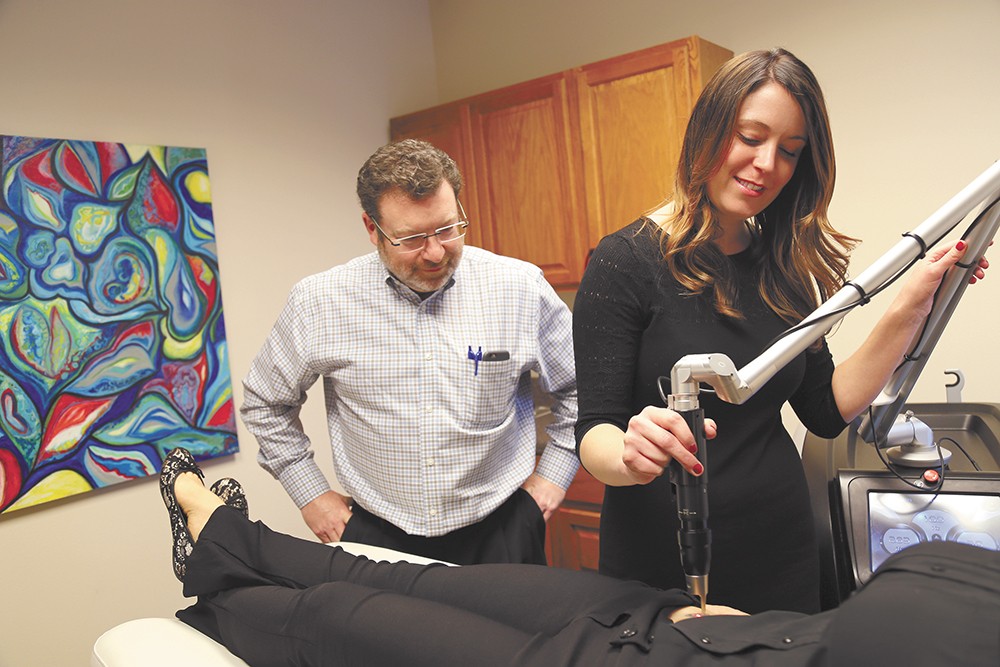 Sarah Philp
Advanced Aesthetics, a Spokane-based cosmetic surgery clinic, uses lasers to remover unwanted tattoos. Unlike at other establishments, the procedure is overseen by Kevin Johnson, a medical doctor.

Spokane attorney Richard Wall has made the same argument in court three times:

Wall was hired by Tyler Arnold and Jason Swanson, licensed tattoo artists who operate Bullet Proof Tattoo, which has locations in Spokane and Spokane Valley. Both men had been issued a cease-and-desist order and a $1,000 fine by the Washington State Department of Health in 2012 for using a Palomar Q-YAG 5, a prescription laser, to remove tattoos without a medical license.

The laser works by heating up tattoo ink, breaking it into smaller particles that can be absorbed by the body. Under the state law, someone practices medicine if they sever or penetrate the "tissues of human beings." Wall argued in court that using lasers to remove tattoos doesn't meet this definition, and the DOH was beyond its regulatory authority.

"Logically, it doesn't make any sense," says Wall. "What actually happens is the light only interacts with the ink. In terms of something penetrating the skin, it's no more than a tanning bed."

After losing before a health law judge and a Superior Court judge, Wall took his case to the state appeals court. On March 31, the court found that DOH had used "wire and duct tape" to string together its regulatory authority over the matter. But the court concluded that the agency technically had the power to require that someone get a medical license before operating a laser for tattoo removal, or at least have a physician on site to delegate the task to a trained operator.

More people are getting tattoos, and more want them removed. Wall worries that this treatment will be out of reach for people who have tattoos that have become barriers to jobs and mainstream life. The ruling notes that Arnold and Swanson (both of whom declined to comment) had undergone training and hadn't hurt anyone with the laser. It further notes that because insurance typically doesn't cover tattoo removal, there is a "need for a lower cost treatment option" that would be an "apparent benefit to the public."

Others say that DOH can and should regulate the potentially dangerous devices.

"Tattoo shops should not be firing lasers without a doctor on board," says Debbie Caddell, owner of the Bellevue-based Caddell's Laser and Electrolysis Clinic. "It's kind of a no-brainer."

of the Orlando, Florida-based Laser Institute of America, says that states vary widely in how they regulate prescription lasers used to remove hair or tattoos. He says some states have few restrictions on who can wield one of the devices, while others require that they be used exclusively by doctors.

The lasers, if used incorrectly, can damage the patient's eyesight, have adverse effects when used in combination with certain medications, cause burns or leave scars. In a statement, the Washington State Dermatology Association expresses support for medical licensing, writing that a "tattoo artist, aesthetician, or other unlicensed provider will not have the benefit of this rigorous medical training. Side effects are more common when the person operating the laser lacks medical training."

Although Anibarro says that no one keeps authoritative numbers on how often laser injuries occur, states are looking into how they regulate the devices because their use is on the rise.

Numbers from the American Society for Aesthetic Plastic Surgery show an increase in demand for tattoo removal in recent years, with 2015 seeing a 37 percent increase. Not everyone providing that service is a medical doctor.

"Little by little they've learned about lasers," says Caddell of tattoo artists. She says that tattoo shops once saw removal treatments as competition to cover-ups, but now they've incorporated them into their business: "They see the benefit, and they can keep clients."

But despite regulations DOH put into place in 2006 that require a physician to be on site at businesses that use prescription lasers to remove tattoos, Caddell says some tattoo shops fly under the radar. Micah Matthews, deputy executive director at the Washington State Medical Commission, adds that this is "typically where the tattoo folks come into trouble."

The Inlander called Self Expressions Body Art Studio and Garland Tattoo and Piercing. Managers at both Spokane-based shops acknowledged that they offer laser tattoo removal, before abruptly declining to comment further and hanging up. Separate calls to both shops inquiring about tattoo removal prices reveal that both could remove a fist-sized tattoo at less than half the price charged by Caddell, who has two doctors on staff at her clinic and says it would cost about $250 for a similar procedure over multiple sessions.

"It is extremely expensive," says Melva Buyers, advocate counselor at YWCA of Spokane, which provides a free tattoo removal program for survivors of intimate partner violence. "If you don't have a job, how are you supposed to pay for that?"

Wall says that cost matters, because removing a tattoo is sometimes about more than removing a bad memory. Someone may be trying to change their lifestyle, and a neck or face tattoo, or one expressing allegiance to a gang, can be a barrier to getting a job. Wall says this case, which he's considering appealing to the state Supreme Court, started with an anonymous complaint to the DOH in 2009. He suspects the complaint was made by someone trying to get a bigger share of the market.

"We believe it was based on someone who does not want non-physicians doing this procedure," Wall says. "This court ruling gives physicians a monopoly on the use of this device, and you can be pretty sure that they'll charge a lot more." ♦