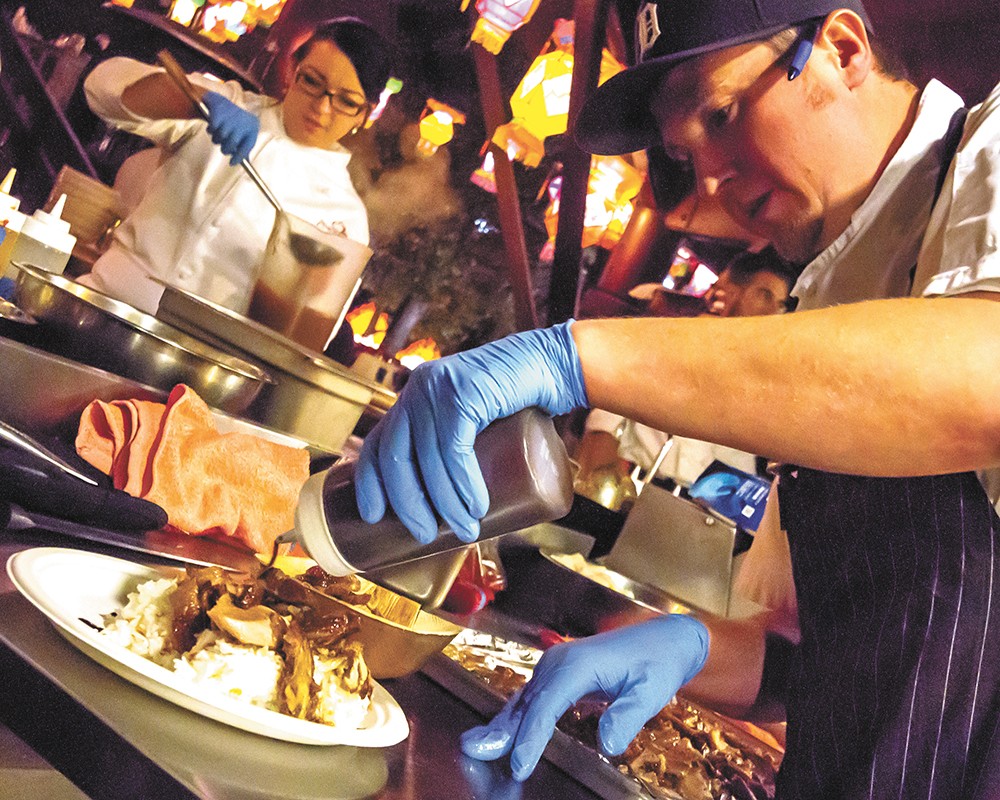 Although the Washington State Chinese Lantern Festival has been extended

for 14 days past its originally planned finale — it now runs through Sunday, Nov. 15 — the collaborative culinary experience, Deng Chu Chinese restaurant, is having its grand finale of sorts this weekend.

The in-festival restaurant, operating in the large, open-air picnic shelter (dress warmly — it's cold even with the outdoor heaters) on Riverfront Park's northeast edge, will offer the final menu of its five featured weeks of regional Chinese food this Thursday through Saturday evening.

For the two weeks added to the festival, the restaurant is only operating on Friday and Saturday evenings (Nov. 6-7 and Nov. 13-14), and can only accept walk-in diners. For those final two weeks, a small-plates menu (around $5 to $10 per item) featuring highlights from the previous five weeks will be served. Also available is the restaurant's beverage menu, featuring locally made tea blends by Winterwoods Tea and specialty cocktails.

For the past four weeks, Deng Chu executive chef Jeremy Hansen, of Santé Restaurant & Charcuterie and Common Crumb Bakery, and his team have cooked a fixed-course and -price menu highlighting a specific region of China to showcase the varied food trends in the geographically diverse country. In order, the regions featured so far have been Guangdong, Shandong, Beijing and Sichuan.

This weekend's final feature is the Shanghai region, home to China's largest city. Set near the Pacific Ocean and the mouth of the Yangtze River, the area is known for using light, mild and sweet ingredients, with a focus on healthy cooking and bringing out the natural flavors of each ingredient, rather than using an abundance of condiments or additives. The four-course, family-style menu includes spring rolls, beggar's chicken and peanut and cream pancakes for dessert. Dining options are available for $25/person (plus $14 festival admission, if reservations are made in advance) or the extensive Chef's Table option ($100/person, seating at 6 pm only), a limited seating experience in the Deng Chu kitchen featuring cuisine prepared in front of diners.

Deng Chu operations manager Kate Hansen says the experience of running a temporary restaurant during the lantern festival's run has been surprisingly smooth, given the challenges of cooking and serving outdoors in a temporary location. For one, a lack of dishwashing facilities means meals are served on disposable dishes.

Hansen estimates that each night it's been open, Deng Chu has served, on average, nearly 300 people.

"Going into this event we didn't really know what to expect attendance-wise, and I'm glad it's been such a great turnout," she says. "It has been a challenge regarding the amount of working hours, and juggling it with our other businesses and children, but we are providing a unique experience and having a lot of fun along the way." ♦

For reservations to Deng Chu this weekend, visit spokanelanternfestival.com.