Two names and a community bridging new and old

Young Kwak
New suburban developments overlooking the valley contrast with its history as a farming area.

People have been living on the floor of the Latah Valley since long before it was part of Spokane,

yet this part of the city, boxed in by steep hills on each side, is often overlooked unless you're watching it fly by out your car window while heading down Highway 195 toward Pullman. As the crow flies, it's less than a mile from dense South Hill neighborhoods. But down in the valley, it feels like a city unto itself.

As many as 800 members of the Middle Spokane Tribe lived along the creek, living off the fish swimming through its waters — a vibrant community, even after settlers came to the area.

When a brickyard came to the valley, about 40 men found work there and things changed. The Spokanes were moved to a reservation. Farmers set up crops. A semi-urban grid of houses was established, and the place took on the name Vinegar Flats after Spokane Vinegar Works was established there.

Subtle changes arrived over the years, but little growth came to this overlooked part of the city for the better part of a century. Today, the hills overlooking the Flats are becoming increasingly populated. There's a shopping center and a couple of Spokane's more respected restaurants. The expansive "neighborhood" is bigger than a lot of towns in our region, and it's here, perhaps more than anywhere else in the Lilac City, where new and old meet.

FARMING IN THE CITY

There's always been good soil in the Latah Valley, and there's been farming there since anyone can remember. In the early 1900s, it was one of the only sites in the state where Japanese farmers had their own land.

You'll see rows of crops and greenhouses in Vinegar Flats, along with plant nurseries and other agricultural businesses. Tucked off of Inland Empire Way, Vinegar Flats' main drag, you'll find Vinegar Flats Community Garden, a project of St. Margaret's Women's Shelter in cooperation with Catholic Charities that has been in operation for about a decade on donated land. Only a couple of miles from downtown Spokane, these farms allow for a unique opportunity, says Brian Estes, the garden's manager.

"The proximity to central Spokane is important, because we're interested in giving folks good opportunities to get out and get in a garden and learn about how food grows. That's a big priority of ours," says Estes.

Food from the garden is sold at area farmers markets and also shows up in Catholic Charities' Food for All program that aims to both feed and educate those in need. Estes says that other farms, including the popular Urban Eden Farm, are in a state of growth, a good sign for proponents of urban farming.

After a few years working at the garden, Estes fully immersed himself in Vinegar Flats life six years ago, moving to the neighborhood. He was drawn by the unique amalgam of artists, farmers and vibrant personalities found there.

"There's a great mix of people by age and size. I just find that it's a small enough neighborhood that you get to know folks one way or another. I feel like my neighbors are keeping an eye out for my place. It's the kind of place you'd want to live," he says.

Young Kwak
The history of the neighborhood's namesake creek name is conflicted.

A CREEK BY TWO NAMES

They don't call it Hangman Creek anymore. At least the city and state don't, even if federal maps maintain that name. It's Latah Creek now, because naming a gorgeous body of water after the hanging of as many as 18 Palouse Indians in 1854 by General George Wright's ruthless troops doesn't do anybody any good.

But you can still walk the links at Hangman Valley Golf Course. After teeing off down the center of a sunbaked fairway, Larry Weir shares the story of the creek, which empties into the Spokane River about two miles north of Vinegar Flats.

"It's like being outside of the city without having to leave the city," says Patterson.

The climb up to Eagle Ridge is surprising the first time you drive it, and by the time you reach the top of the hill at the far western border of Spokane's city limits, there's a sensation that you've arrived far from the city where you began.

Since 1996, this neighborhood has been placing houses overlooking the valley and downtown Spokane. At first it was slow, but as of late, homes are popping up at an impressive clip. The final subdivision will go up for sale some time in 2017, says Lori Henriksen, the vice president of operations for the development, which was designed by Newland Communities using four different regional homebuilding companies.

It's not like the grid of the South Hill, but rather winding streets connected with a paved trail system. Pocket parks dot the swatch of 1,100 homes. Bigger parks, some of which are still under construction, give the area a resort feel.

As opposed to patchwork-design mix of Vinegar Flats below, Eagle Ridge is much more intentional. To visit both sections of the area in one day is to time-travel through the progression of urban planning over the course of more than 100 years. Still, there's the same sense of neighborhood pride in Eagle Ridge that Estes has come to enjoy in Vinegar Flats.

"We have movie nights and parks and other events. There's a major emphasis on connectivity here. We want this to be a real community, not just houses," says Henriksen.♦

Established: Farming began on the floor of the Latah Valley in the late 1880s. 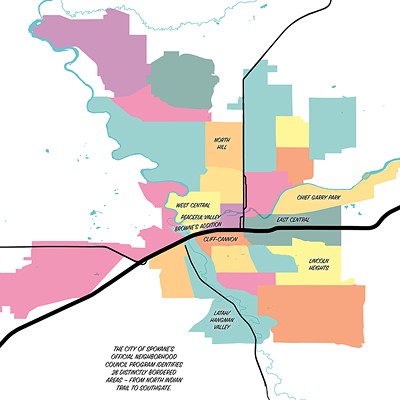