Who's best positioned to bring vision and leadership to the Spokane County Prosecutor's Office?

Gathered around a cozy brick patio on Spokane's South Hill, a group of about 20 voters take turns asking questions of Breean Beggs, a regionally renowned civil rights attorney and former director of the nonprofit Center for Justice, now running for the open county Prosecutor's Office. A wood stove crackles nearby as Beggs introduces himself to each visitor and listens to their concerns.

A short-haired woman pinching a glass of white wine approaches and asks Beggs what he would like to change about the Prosecutor's Office if elected.

"Really, almost everything," he answers.

As a founder of the local "Smart Justice" movement, Beggs, 51, sees the ongoing campaign as a chance to redefine how the county attacks crime. He explains the system should identify why repeat offenders commit crimes, then introduce programs that undermine the root causes — cutting recidivism and costs.

"If you spend your money on that," he says, "you get them out of the cycle."

"I bring a lot to the table in the areas where we're hurting the most," Haskell says. "I'm pragmatic, but compassionate."

While Beggs has proven a persistent watchdog over misguided legal practices, Haskell argues he has the insider knowledge and support to build a stronger, more effective department. Both have watched the Spokane community grapple with a troubled criminal justice system in recent years, seeing sharp divides over accountability and enforcement.

As the system embraces reform at many levels, both candidates recognize their office may come to shape the next evolution of Spokane justice.

"Most people haven't heard my name," Beggs admits. "They certainly haven't heard Larry's name ... but they have all heard of Otto Zehm."

Spokane County Prosecutor Steve Tucker has overseen the office, leading 65 prosecuting attorneys and managing an $11.6 million annual budget. Tucker, a Republican, has weathered years of criticism over what many call his absentee management of the office. He dodged a recall effort in 2011, but has also drawn intense disappointment over his inaction in the Zehm case.

Zehm, a 36-year-old janitor wrongly accused of theft, died in 2006 after a violent confrontation with Spokane police officer Karl Thompson. Tucker declined to pursue charges, leaving Thompson's eventual prosecution to federal authorities and sparking a deep distrust in the justice system that has since driven calls for increased police accountability and legal reforms. 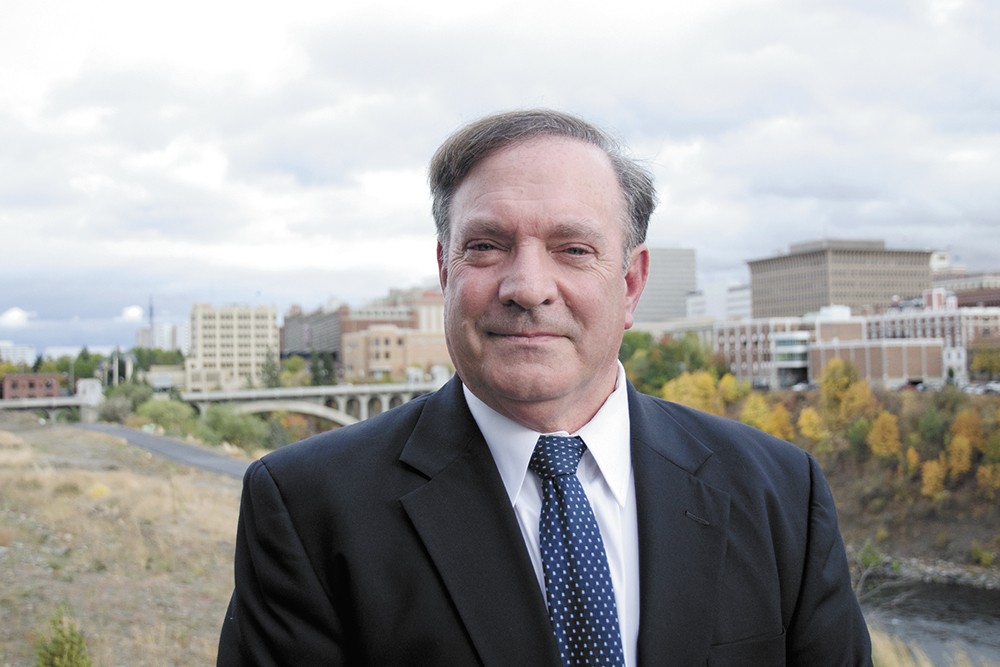 Beggs, who represented the Zehm family in civil court, would later secure a $1.6 million settlement and help direct civic outrage into the Smart Justice campaign. Working with community advocates, consultants and local leaders, Beggs has spent the past few years pushing for a progressive new approach to justice and crime reduction.

Smart Justice strategies focus on the offender, not the crime, by identifying the underlying motives driving behavior, including drug addiction, homelessness, mental health issues or pure criminal intent. Nonviolent offenders with amenable issues get diverted into drug treatment, psychiatric therapy or other supervised rehabilitation. Others would face stiff prison sentences.

"What I get excited about is creating those changes," Beggs says. "If we changed our criminal justice system, so we were really reclaiming lives and creating a much safer community — that's a lifetime achievement."

Haskell has publicly supported the Blueprint, pledging to bring new energy to the Prosecutor's Office while distancing himself from the controversial Tucker administration. Haskell argues that the office has already adopted many of the new sentencing alternatives outlined in the plan and he hopes to evaluate or expand additional rehabilitation programs.

before obtaining his law degree at the University of Washington in 1991. He started his career with a Bellingham law firm, practicing civil and criminal litigation for 13 years, rising to partner in 1996. In 2004, he left to take over the Spokane-based legal nonprofit Center for Justice. As the executive director, Beggs managed attorneys and volunteers on civil rights, water quality, land use and government accountability cases.

"My passion is positive community change," he says. "How do we make a better community? ... To be an activist on the outside takes a lot of time and a lot of work."

Beggs joined the Paukert & Troppmann firm in 2010, continuing to work on cases involving civil rights violations and questionable enforcement practices. Earlier this month, he secured a $350,000 settlement with the county in a class-action lawsuit over the jailing of people too poor to pay legal fees.

As prosecutor, Beggs says he would look forward to seeing how the office could serve as a sort of gatekeeper in support of justice reforms. He says he wants deputy prosecutors tracking and analyzing outcomes, looking for ways to reduce crime and recidivism instead of just winning lengthy prison sentences.

Many nonviolent defendants now crowding the county jail could await trial in an expanded Electronic Home Monitoring program, he says. Incarcerating someone in the jail costs about $130 a day. Beggs notes that home monitoring, which includes GPS tracking and supervision from a probation officer, costs just $10 a day.

Savings from such changes would open jail space and allow for new investment in drug treatment or other rehabilitation programs. Giving an offender a chance to reform his or her behavior can cut recidivism from 60 percent to 10 percent, Beggs cites from recent studies, reducing crime and saving the taxpayer expense of arresting them again and again.

Beggs says he does not expect many staffing changes at the office, but hopes the deputy prosecutors would buy into a new mission.

"There's more to justice than just dollars and cents, but that is a huge part of it," he says. "People forget how much we pay and how little we get in return from our system in terms of safety and crime reduction."

Mary Lou Johnson, a Smart Justice advocate running for Spokane County Board of Commissioners, praises Beggs' tireless efforts to improve the local legal system. She says he has provided insight and support throughout the reform process.

"A lot of the ideas that we developed he had input on," she says. "[Beggs] has been in the trenches on these issues for a long time."

Squaring up to the podium,

Haskell stands before an immense crowd of union members last week as one of just a couple of Republican candidates endorsed for county office by local labor leaders. Campaign signs for Democrats cover the wall behind him, but he waves and smiles — thanking the crowd for their support. He says he joined his first union as a teenager, going on to later represent his fellow deputy prosecutors at the county's union.

"It's a great pleasure to be here tonight," he says. "With your help, I will lead a union of 65 prosecuting attorneys. I am the former president of that union myself. I'm very proud to have worked with labor my whole life."

Haskell enlisted in the Air Force out of high school, flying B-52s and B-1b bombers throughout his military career. He earned his law degree from Seattle University in 1997 and joined the Spokane County Prosecutor's Office. In recent years, he has also worked off and on for the U.S. Attorney's Office on gun, drug and gang cases.

From 1999 to 2002 and 2005 to 2010, Haskell served on the Airway Heights city council, including a year as deputy mayor. He also served five years on the Cheney School Board before moving out of the district.

Throughout his recent campaign, Haskell has sought to distinguish himself from the "status quo" label while leveraging his insider knowledge of ongoing operations. If elected, he says he would likely restructure the office around new priorities for alternative sentencing programs, gang enforcement and victim services.

"I don't think it's anything major," he says, "but it just allows the organization to grow into the modified role we'll have as I see the expansion of alternative sentencing."

Haskell explains that the county already runs specialty courts for crimes involving drugs, veterans or people with mental health issues, allowing for alternative sentencing options. An Early Case Resolution program facilitating quicker plea deals has also saved money and jail space. He warns any new reform programs should be vetted rigorously and backed by research before the county implements them.

Spokane County Sheriff Ozzie Knezovich, who is running for re-election this fall, has endorsed Haskell based on previous partnerships with investigators, building gang cases and prosecuting repeat offenders. Knezovich notes he also appreciates much of the work Beggs has done.

"It's hard at times when you have two friends who run against each other," the sheriff says, "but when you look at the backgrounds, I think [Haskell] has the background to move the agency forward."

In the August primary,

Haskell enjoyed a strong showing with nearly 58 percent of the vote. Since then, both candidates have fought to strengthen their impression on voters by proposing increased community engagement. Both candidates have also vowed to hold their fellow public servants, including law enforcement, accountable if evidence supports wrongdoing.

"I won't always be able to give people the answer they want to hear, but I will always be honest with them," Haskell says of such cases, adding, "One of the things you don't want to do is run your office by public opinion."

Beggs, in turn, has received almost $134,000 in financial support largely from private attorneys, university professors and city officials of both parties. He says he has stepped up campaigning in the weeks since the primary and takes a certain pleasure in a sort of "faith" that his campaign has, if nothing else, pushed forward the local dialogue.

"I've enjoyed that feeling that it's not in my control," he says. "I'm at the mercy of the universe and the voters. I have no idea what's going to happen on Election Day." ♦

Clarification: Haskell served two years as president during a total five years on the Cheney School Board.