Learning from a loss: The Zags head into March with a potentially valuable lesson 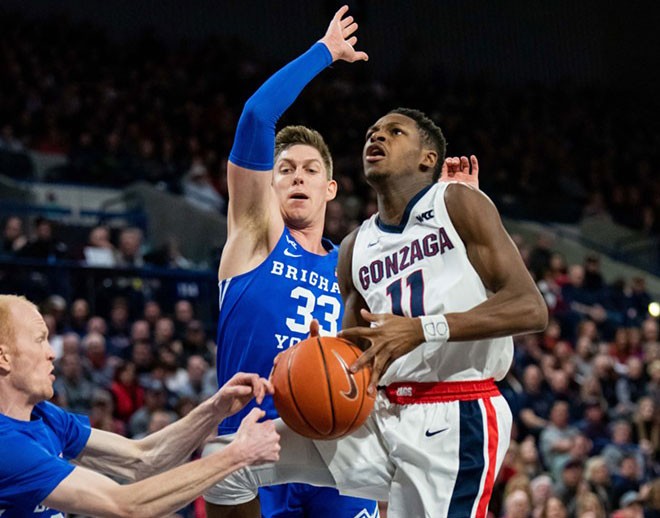 Erick Doxey
Unlike this game in Spokane, BYU had a winning plan against Gonzaga in Provo Saturday.

BYU defeated Gonzaga 91-78 in Provo Saturday, and a student section over 5,000 strong stormed the court to celebrate with the Cougars. It was as poor of a performance as Gonzaga’s mustered since the Michigan game, their only other loss this season. It was ugly, it was brutal and Gonzaga was clearly the inferior team on the night.

That said, it’s not the end of the world.

BYU climbed from No. 23 in the AP Top 25 to No. 17 after the win, while Gonzaga fell only one spot, from No. 2 to No. 3. Part of that has to do with other teams near the top of the poll losing games as well, like previously undefeated San Diego State, which lost its first game of the season Saturday.

The West region goes through Los Angeles, which is considerably closer for the teams and their fans than New York City, home to the East regional final. So, getting the one-seed in the West is a big deal.

Earlier this month, the NCAA Tournament Selection Committee put out their early look at the top 16 teams in the bracket at that moment. They had Gonzaga as the one-seed in the West. After the loss, that hasn’t changed. ESPN’s Joe Lunardi’s updated bracket has Gonzaga as the one in the West and San Diego State getting sent East.

Bracket Matrix tracks 96 of the top bracketologists, 94 of whom still regard Gonzaga as a one-seed. Only 76 see San Diego State the same way. Despite the loss to BYU, Gonzaga’s hold on the top spot out west has strengthened.

The other top seed in play is at the WCC Tournament. Gonzaga’s still in the driver’s seat for that as well. Starting last season the WCC went to a tournament format that awarded a triple-bye, all the way into the semifinal round, to the teams that finished first and second in the standings. Gonzaga has already clinched one of the two triple-byes.

All of this is to say that, yes, Gonzaga lost on Saturday. That’s not the only thing that happened, though. There are 353 teams in college basketball, which means there are 352 teams doing things every single day that Gonzaga can not control. Fortunately, those things have been happening in a way that has been beneficial to the Zags.

There are things that Gonzaga can control in the wake of this loss, though.

You’ll never hear a coach say that they want to lose a game. You want to win every game you play. But sometimes, you need to lose a game. This loss, especially coming so late in the season, could prove to be a huge motivational moment for the Zags.

Remember 2017, when Gonzaga went 29-0 to start the year before losing the regular season finale to these same, pesky BYU Cougars? That loss ended the quest for perfection, but it didn’t derail the season. Gonzaga followed it up with eight straight wins as they marched to the National Championship game.

This season the Zags saw their 19-game winning streak come to an end. They’re still in position to make another deep run if they learn from this loss.

The Zags learned that lesson after losing an ugly game against Michigan on the day after Thanksgiving. That was 19 wins ago, though. It certainly doesn’t hurt the team’s long-term aspirations to learn that lesson again now, with March looming less than a week away.