Tackling the many variations of ADHD challenges therapists, parents, teachers and kids 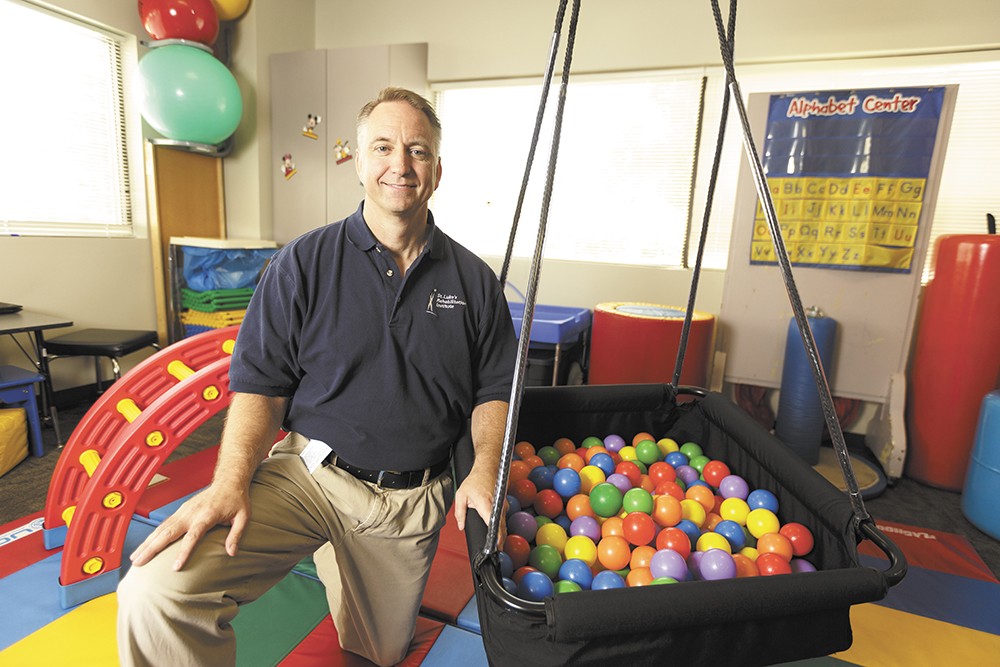 Jason has a new backpack,

Ashley's signed up for soccer, and Matthew already knows what his science project will be. Soon school corridors will be full of noisy, eager kids ready for a new school year, and parents across the nation will cross their fingers that this will be a year of learning, growing, making friends and fitting in.

No parent hopes this will be the year they will be told Jason or Ashley or Matthew is being disruptive in class, cannot get along with other children, doesn't focus or has no impulse control. Not one parent, or child for that matter, hopes this is the year he or she will be diagnosed with ADHD.

Attention deficit hyperactivity disorder is usually first diagnosed between the ages of 3 and 6. It is four times more common in boys than girls, and although symptoms can change over time and often lessen as the child grows older and learns coping skills, there is no cure. From 50 percent to 70 percent of adults diagnosed with ADHD as children continue to exhibit ADHD characteristics.

"Years ago, hyperactive, impulsive or unfocused children would be diagnosed as having a hyperkinetic disease or defect of moral control," says Matt Thompson, MD, a pediatrician at Spokane's Kids Clinic and an InHealth columnist.

"Neither label was particularly accurate. We now realize that ADHD is not a good or bad condition, but a complex neurobiological disorder," he says, noting that it's important to rule out other medical conditions that can also affect a child's ability to concentrate and cause disruptive behavior, including middle ear infections, seizures, anxiety, depression, sleep or genetic disorders and hearing or vision problems.

Thompson says diagnosing ADHD can be assisted through the use of validated tools such as the Vanderbilt Assessment Scale, which is administered to the child's parents, teachers, coaches and others who come in close contact with him or her. The test consists of more than 50 questions dealing with issues that range from antsy behavior to delinquent acts, depression and academic achievement.

Educators are frequently the first to point out a child's disruptive or unfocused behavior to parents. When it becomes necessary to talk to parents about their child, Hamblen Elementary fifth-grade teacher Lisa Smith says it's not her job or profession to give a diagnosis of ADHD. She does present parents with carefully documented incidents, classroom modification techniques she's tried and the results. If the parents ask for additional suggestions, she will direct them to their pediatrician. In her years as a teacher, she has learned that each child's situation is unique. "Some children may have the stereotypical behaviors of ADHD/ADD and might do great with prescription medications, some might not; some might do well with natural remedies, some might not," says Smith.

The Centers for Disease Control and Prevention reports that 6.4 million American children between the ages of 4 and 17 were diagnosed with ADHD in 2011, representing a whopping 42 percent increase over an eight-year period. The same study reports that the percentage of children between 4 and 17 taking medication for ADHD increased by 28 percent between 2007 and 2011.

"The increase in medication has been a function of large amounts of empirical evidence that supports its use and efficacy for students with ADHD," says Tim McLaughlin, professor of Special Education at Gonzaga University who has published numerous articles regarding ADHD.

"New medications such as Concerta, Strattera and Adderall have been quite effective," McLaughlin adds. "In addition, Ritalin remains highly effective."

Adderall and Ritalin are the most commonly prescribed medications; both are considered stimulants. It may seem counterintuitive to prescribe a stimulant to a hyperactive child, but the drugs stimulate parts of the brain needed for focus, impulse control and organization.

The drugs can have negative side effects, including decreased appetite, sleep problems, repetitive movements, personality changes and hallucinations. One drug, Strattera, has been linked to suicidal thoughts, but medical professionals stress that this is rare, and that underlying conditions such as depression, alcohol or drug abuse, a family history of suicide, bipolar disorder and schizophrenia are frequently present.

"There is no one-size-fits-all medication," Thompson says. "Dosages, extended release preparations and use of adjuvant medications need to be fine-tuned to find the ideal combination."

Recent British research has revealed a possible relationship between consumption of food additives, artificial colors and preservatives and ADHD, but no link between junk food, sugar and ADHD has been proven. Similarly, any connection between television and video games and ADHD is also unproven.

That doesn't mean there aren't things besides medication that can assist in managing ADHD. McLaughlin stresses the importance of a multipronged approach.

"If I had a child with ADHD," McLaughlin says, "he or she would receive medication treatment, behavior therapy interventions in the home and at school, and directive counseling for the parents and his siblings."

"When Kyle was in kindergarten and first grade, we began to realize it was hard for him to stay focused unless he was doing something he really enjoyed," says Betsy, a Spokane mom whose name has been changed here to protect her privacy. "He had been wearing glasses with high correction since he was 3, and at first we thought it was a vision issue. He didn't have trouble sitting still, he's a hard worker, teachers love him and he gets along fine with other kids."

But while Betsy was volunteering in Kyle's classroom, she observed him drifting off and losing interest. After vision issues were ruled out, she and her husband decided to have him tested for a learning disability. He was diagnosed with ADD.

"My husband and I know how important it is for children to get a good foundation from K to fourth grade," Betsy says. "As a teacher, I also know you can set a child up for failure if you try to fit a square peg in a round hole. We thought long and hard about putting Kyle on ADD medication; I did a lot of research beforehand."

They worked with their pediatrician to adjust Kyle's medication, conferred with his teachers and watched their son make steady progress. Kyle was medicated from first through fourth grade and now, going into the fifth grade, is up to and above grade level. He'll try being off medication this year, and the family will continue to keep close tabs on his progress.

Amy (also not her real name) is a special education teacher with an ADD son and an ADHD son. Under the guidance of her boys' pediatrician, they added occupational therapy to the menu of medication, parental monitoring and communication with teachers and their pediatrician.

"OT helps with a lot of things," Amy says, "including self-control, self-confidence, proprioceptive processing and the vestibular system." The proprioceptive system is made up of muscles, joints and tendons and contributes to a person's awareness of body position (think: knowing how to sit in a chair) and fine motor skills (handwriting, buttoning a shirt). The vestibular system contributes to balance.

Although an occupational therapy gym full of swings, mats and exercise balls may look like a playground, it's actually a place for kids to learn strategies that can help recalibrate their over- or underactive sensory systems, improve fine motor coordination and develop organizational skills.

"One compensatory strategy for a kiddo who can't concentrate or sit still," says occupational therapist Don Kammerer at St. Luke's Rehabilitation Institute, "is to give them a squishy ball so they can fidget with that."

"Another is a wobbly chair — not one that will fall over, of course," he continues.

Another is a pencil box that's been filled with 5 pounds of weight. When an antsy child puts it in their lap, the weight helps them calm down. These methods, and many more, help an easily distracted child focus on the task at hand.

In her classroom, Lisa Smith has had success using behavior modification techniques. For instance, one student might learn better standing up; another might need to be in a quiet place. She's utilized exercise balls instead of chairs, and will allow a child to take a break when she notices that he or she is struggling. Sometimes she simply walks over to the student and places her hand on his or her shoulder or desk to help them regain focus.

"It is an incredible dance we do daily to make sure everyone's needs are being met," she says.

In the movie Different Drummers, produced and co-written by Spokane's Lyle Hatcher, the mother of a hyperactive fourth grader in a 1960s classroom dumps his Ritalin down the drain. When a local high school class screened the movie not long ago, they broke out in applause when viewing that scene. Hatcher believes he knows why.

"They saw a mom stand up for her son," Hatcher says. "I know, because I was that kid."

Energetic, hyperactive and frequently unfocused, Hatcher's school principal insisted he should be medicated. His parents reluctantly agreed, but after three months they didn't like the changes in his personality and decided to take him off Ritalin.

To channel his excessive energy, Hatcher went from medication to running, sometimes as many as 10 miles a day. He became a wrestler in high school, a soccer coach as an adult, and at one point, single-handedly cleared out 23,000 pounds of trash along the Spokane River. He went on to build a successful career as a financial consultant and has become a passionate anti-ADHD drug advocate.

Medicating hyperactive or unfocused children will continue to be an intensely personal decision a family must make in concert with their pediatrician. Some, like the Hatchers, will opt out. Others, like Amy, will choose medication, occupational therapy and monitoring. She says they were thrilled and relieved to hear their 7-year-old son who has ADHD recently say, "I've never been able to accomplish so much before! I feel exactly like myself." ♦

Attention Deficit Hyperactivity Disorder is one of the most common developmental disorders of childhood. The syndrome has three subtypes:

Easily distracted, does not pay attention to details or follow instructions, is oblivious to daily routines, has difficulty organizing and finishing tasks. Also known as ADD (Attention Deficit Disorder).

The above symptoms are equally present.