Leaves in a Jet Plane

Algae, trash, seeds and wood pulp could fuel the future of commercial and military aviation - literally. 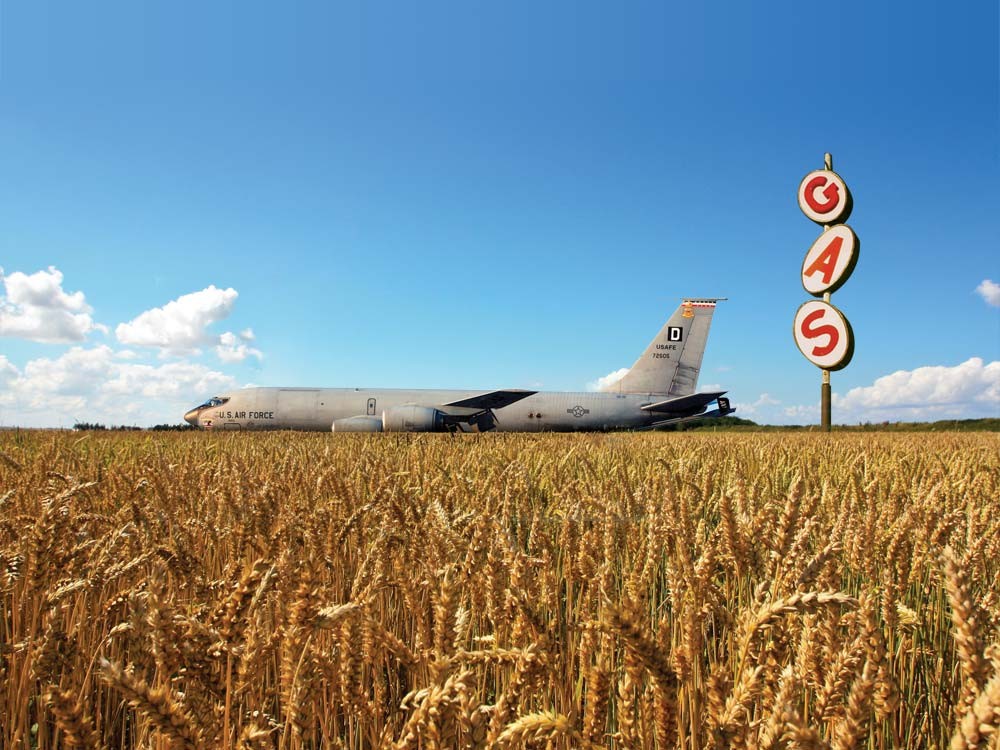 The next time a green-hulled KC-135 Stratotanker thunders over the Spokane skyline, take a whiff. It might smell like pine needles.

A regional effort is gaining steam to power commercial and military jets with fuel made from leftovers from the forest industry, local crops, municipal waste and algae.

“It’s not Buck Rogers’ futuristic. It’s something that exists today,” Todd Woodard, spokesman for the Spokane International Airport, says of the potential for fuels made from the region’s resources, which include not just the raw materials, but also an established and powerful aviation technology industry, strong research universities and the political will. “It could affect rural areas in a way not seen since electrification and the telephone.”

A report recently released by Sustainable Aviation Fuels Northwest — a consortium comprised of the Spokane International Airport, Washington State University, Boeing, Alaska Airlines and the ports of Seattle and Portland — says the time has come for government to throw its weight behind the initiative. And with recent moves by both the president and Washington’s governor, that is beginning to happen.

“Many of our great industries, such as aerospace, computers, pharmaceuticals and automobiles, have drawn vital early support and investment from government,” the SAFN report says. “Building a sustainable aviation fuels industry is no exception.”

The idea of using plants to power machines has been around a while. In 1896, Henry Ford used corn-derived ethanol to power one of his first automobiles.

But with the plethora of petroleum sources available throughout the 20th century, experiments to turn vegetation into fuel diminished.

The world has changed. Oil is increasingly harder to extract from the earth, and worries of humanity’s impact on the climate have led to more research in new biotechnologies.

In 2008, a Boeing 747-440 flew from Amsterdam to London using a fuel based on palm oil, the first commercial jet to use biofuel.

Last year, President Obama created an initiative to encourage the nation’s production of biofuels. His goal was for the nation to produce 36 billion gallons of these fuels by 2022, up from 11 billion gallons two years ago. In March, Obama called for the construction of four large-scale domestic biofuel refineries. A month later, Washington Gov. Chris Gregoire signed a bill green-lighting a project that will experiment with turning wood pulp into fuel.

Environmentalists are giddy over these developments since jet biofuel has fewer carbon and sulfur emissions than normal jet fuel. But regional aviation leaders have other reasons for experimenting with the fuel.

“There’s the cost of petroleum-based fuel — the unreliability of a resource you can’t generate here, but buy from overseas. They see this as major challenge to the airline industry,” says Jay Manning, Gregoire’s chief of staff. Leaders in aviation wanted to “come up with a dependable local source of fuel that they know they can have access to, and that the price will be not volatile.”

In the Pacific Northwest, commercial and military aircraft use 865 million gallons of jet fuel annually. That figure is expected grow by 1 billion gallons over the next 20 years.
It won’t be easy converting that much fuel: The initial, and modest, goal of the project is to convert just 1 percent of aviation fuel to biofuel in the next five years.

Though the report is billed as a 10-month study, it’s actually the culmination of years of work, “a midpoint check to see if it’s a viable option, if there are insurmountable obstacles,” says Manning, Gregoire’s deputy. “Well, it is a viable option and the obstacles are surmountable.”

Ross Macfarlane works with Climate Solutions, the nonprofit that compiled the report. He facilitated the project.

“I will say that this report really helped put the Northwest on the map,” Macfarlane says.

Specifically, he continues, people realize the region could lead in this innovation because of the “top engineering skills here, the tremendous supply of sustainable biomass” with the region’s agriculture and forest industry. Also, he says, the Pacific Northwest has land grant institutions like WSU to perform research. Lastly, Macfarlane says Washington’s representatives in all levels of government and the business sector offer “a strong supportive climate, policy-wise.”

He says aviation biofuels are different than all other renewable energy resources for one simple reason: It’s not the producers of the energy advocating for its acceptance. It’s the people who want to use it.

“We’ve seen renewable fuels being pushed by the supply side,” Macfarlane explains. But with jet biofuels “it was the aviation leaders pushing it. … The military was actively involved [through the defense logistics agency which] coordinates all the fuel purchases. … Five, ten years ago, the folks at Boeing really identified this as a high priority but were concerned if it would be practicable.”

Now many are saying it is feasible, but the DNR’s Partridge says support from the private sector is integral.

“It’s got a lot of natural momentum and it’s a sound idea,” he says. “But there will need to be continued private sector support … as these technologies move to the private scale.”

“I don’t think it’s pie in the sky at all,” adds Manning. “There are drivers here that are significant enough. But the capital costs make the first 1 percent the hardest. … It gets easier the more you go on.”

Woodard, at the Spokane airport, says he’s confident they’ll get there.

“On an annual basis, we handle 15 to 20 million gallons” of jet fuel, he says. “In the beginning, the first three to five years, maybe we’ll get to 10 percent as a fuel mix. Eventually, it will be 50 percent.”

Soon, he adds, the fuels that were born in the Pacific Northwest will be everywhere: “They are a very fungible product. It’s the same in Spokane as it is in Singapore as it is in Stockholm. You really get the sense that you are participating as a global citizen. Aviation is a highly mobile industry. Whatever you fuel the plane with today will have to meet with the [standards] in Europe tomorrow.”

Greater Spokane Inc. is hosting a State of the Green Economy forum Wed., June 15, and one of the topics will be aviation biofuel. Ross Macfarlane is a speaker. Visit greaterspokane.org.