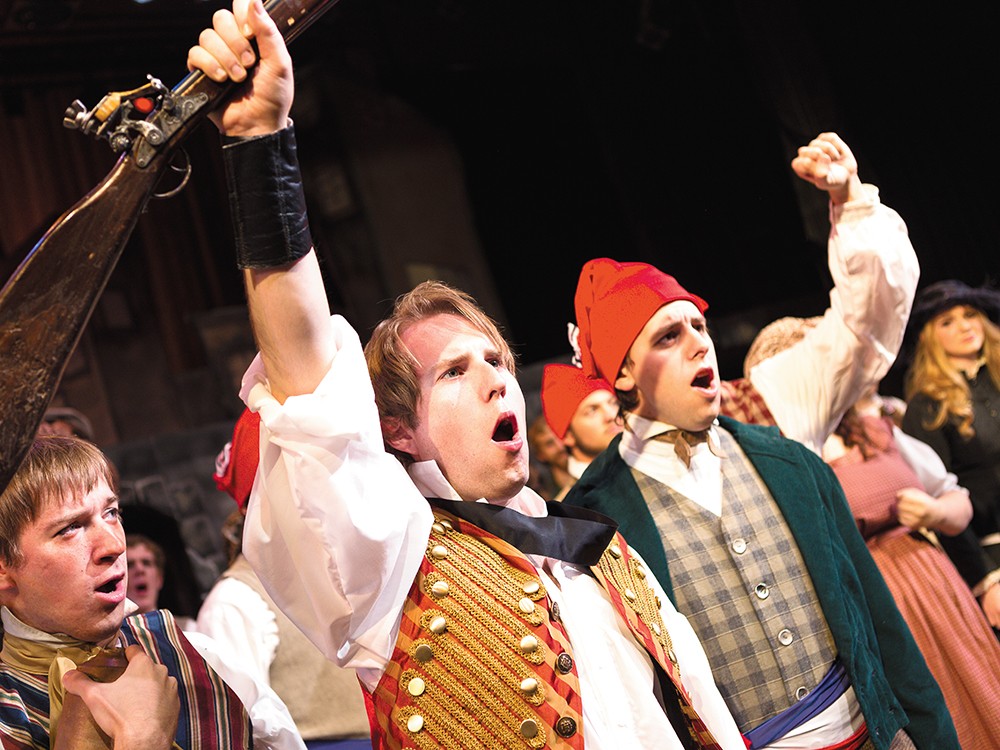 Stephen Schlange
The cast of The Civic\'s Les Miserables.

It’s no exaggeration to say that Douglas Webster knows Les Misérables inside and out. He was first introduced to the musical around 1987, when a mentor mailed him the original cast recording as a double LP that bore a Post-It note with the simple instructions, “Check this out.”

Eighteen months later, he was onstage playing Jean Valjean as an understudy in the third national touring production, which, incidentally, brought him to Spokane for the first time. Over time, Webster would be called on to perform the lead role in various productions of Les Mis again and again. As recently as 2008, he was Valjean in the Coeur d’Alene Summer Theater production of Les Mis, and the musical has been a cornerstone of his teachings as a university professor.

With so much of his on- and offstage career rooted in Les Mis, it’s no wonder that Webster feels a strong personal connection to this particular musical, which is based on Victor Hugo’s epic (and epically digressive) 1862 novel of the same name. In a pinch, Webster might even admit to seeing some cosmic harmony between this “opera with a pop sensibility” and his own life trajectory as “an actor that went to opera school,” just as he sees an uncanny happenstance between the director position that opened after Yvonne A. K. Johnson’s departure from the Civic and his being asked to fill it.

The Show Will Go On

One part of former Spokane Civic Theatre executive director Yvonne A.K. Johnson’s lawsuit against the organization attempted to stop Les Mis from being performed, due to Johnson’s “substantial intellectual property rights” regarding the performance. But two weeks ago, her attorney Bob Dunn says, Johnson decided to stop pursing the injunction. “Yvonne really didn’t really want to interfere with the community’s ability to enjoy theater,” he says.

“I got a phone call after the big upheaval here, saying, ‘Are you available to help us out?’ I checked my schedule, and literally to the day I was available,” he says. “It’s just freakish how that worked. I don’t take it as odd when things like this happen and it’s coincidentally perfect. This is a charmed production.”

He says that enjoyment is palpable, and that is due in large part to the Civic’s volunteer actors, who are as talented as many professional casts he has worked with. Natalya Ferch in particular has impressed him with her “organic and smart” acting choices in her role as the adult Cosette.

“She said, ‘I don’t want her to be just a kept pet, a trophy. I want to find a way for her to be stronger than that.’ And she has. She’s found a few specific physical actions that the audience will either see or feel. All of a sudden, her Cosette is stronger than most I’ve ever seen.”

The strengths of the individual actors have allowed Webster to direct with closer attention to detail instead of concentrating on broad spectacle “where everybody times it to be looking left, and gradually center, and gradually to the right.”

“At any given point, an audience member may zero in on one of our actors and track them. And if I’ve done my job right, and if the actors are doing their job right, there will be no point in which that actor just holds space. They are always going to be in the process of going from one place to the next without looking busy; they just have purpose.” Webster is directing for the audience members who “are there to look deeper — the people that love the show but want to watch Cosette the whole time, or figure out why Marius winds up with Cosette and not Éponine.”

Ultimately, in the face of any residual tension at the Civic, “it’s got to be fun. It has to be an enjoyable experience for people. This should be joyous. And that’s what the audience is going to see,” Webster says and laughs. “They’re going to see as joyous a production as you can have where everybody dies in the end.”