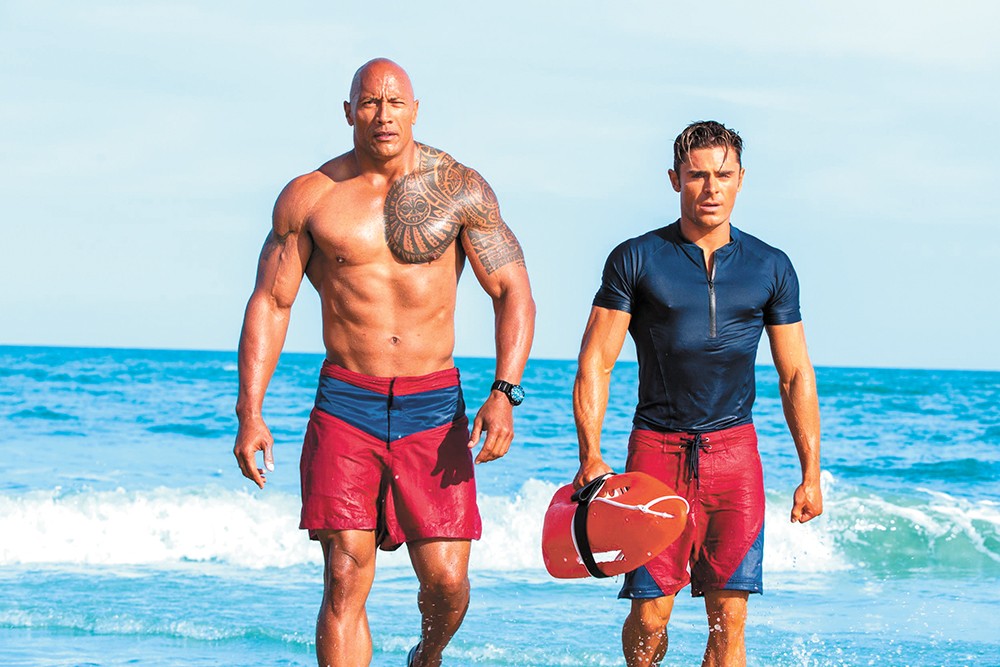 The Baywatch movie is the cinematic equivalent of a nasty sunburn.

Looking at the trailers and posters for Baywatch,

you might assume the movie is a parody, taking the formula of a mediocre TV drama from the past and developing jokes around its misplaced earnestness. But the Baywatch film appears to have been made by people who hold the series in a bizarrely high regard, because long stretches play out like a straightforward, forgettable episode of the show that inspired it. When it actually tries for comedy, it's almost impressively unfunny.

At least Dwayne Johnson brings his irresistible charisma to the enterprise, playing Florida lifeguard Mitch Buchannon, a role originated on the small screen by David Hasselhoff. He's trying his damnedest to make this movie enjoyable, but it's a fruitless endeavor. Johnson is an adept comedian when everything around him is at odds with his own toothy, tough-guy persona, but here he's essentially playing an infallible superhero (he's likened to both Superman and Batman before the opening credits finish rolling), which means nothing he does is inherently funny.

Zac Efron is the well-toned Oscar to Johnson's hulking Felix, a former Olympic swimmer named Matt Brody who became a national laughingstock after vomiting in the pool during a relay race. He's one of Buchannon's newest recruits, alongside the angelic Summer Quinn (Alexandra Daddario) and the obligatory chubby buffoon Ronnie (Jon Bass), nursing a crush on blonde bombshell CJ (Kelly Rohrbach), who, like Pamela Anderson before her, always seems to be running in slow motion.

The movie follows suit, unspooling at half-speed over the course of an unbearable, bloated 116 minutes. So much for brevity being the soul of wit. The creaky plot involves the lifeguards trying to stop the proliferation of a recreational drug called Flakka, described as "bath salts on meth," which keeps washing up on the beach in baggies. It's being distributed, we learn, by socialite Victoria Leeds (Priyanka Chopra), who hopes that a drug epidemic will eventually drive down local real estate prices, allowing her to snatch up all the valuable beachside properties.

This is the kind of rudimentary plot that would have been deemed too banal for the original Baywatch series, and it's almost shocking how straight director Seth Gordon (Horrible Bosses) plays it. There are extended scenes in this movie that don't even attempt comedy — are we really expected to be emotionally invested in Johnson and Efron's mentor-protégé relationship? — and in the instances where it actually goes for laughs, it resorts to supposedly shocking set pieces involving public humiliation, sexual degradation and genital trauma that practically wheeze with dirty-minded desperation.

There are the seedlings of decent jokes here, especially in the local police force's increasing exasperation at just how far the lifeguards are willing to overstep their boundaries. But this material isn't given any satirical spin: Even the obligatory cameos from Hasselhoff and Anderson, which could have supplied some knowing chuckles, feel like sketchy afterthoughts. Any average moviegoer unfortunate enough to suffer through this film could come up with better, more inspired comic ideas than what they'll see up on the screen. It's not even trying.

The few good TV-derived comedies — The Brady Bunch Movie, for instance, or both Jump Street films — possess an obvious affection for the source material, lurking just beneath the irony. Baywatch, on the other hand, is unbelievably sincere when it isn't merely stupid, a fawning tribute to a show that doesn't deserve such flattery. ♦

Baywatch is not showing in any theaters in the area.