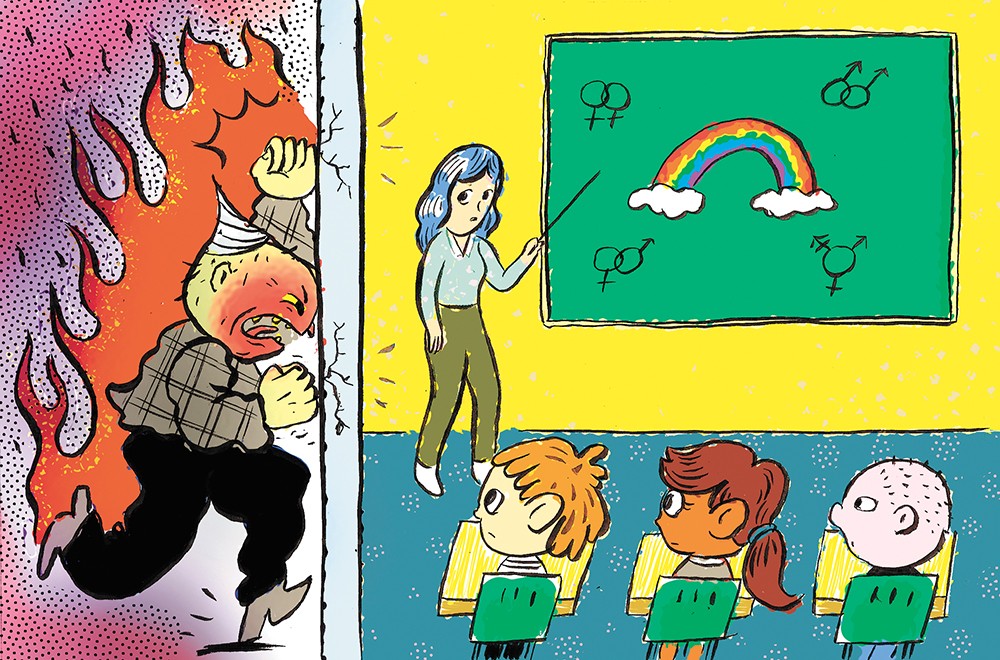 The fear-mongers are at it again — and this time, they're exploiting our children.

I'm talking about the folks who pounded the drums of misinformation with the hope of drawing a crowd to the June 28 Spokane Public Schools board meeting. Their target: the medically accurate, federally certified, state-approved "Get Real" sex-ed curriculum unanimously recommended for the district's middle-school classrooms.

Where were these people during the two-year public research and vetting process? Oblivious, until, using a blend of "alternative facts," emotional triggers and sexual shaming, the local Republican Party sounded an 11th-hour alarm just a few days before the meeting. "Countless confused children!" they warned. Teachers forced to violate their religious beliefs! (Not so, according to the district.)

John Repsold, a member of the advisory committee that recommended Get Real — but did not vote — said he doesn't like the fact that the Planned Parenthood League of Massachusetts helped develop the curriculum, or its teaching that gender and biological sex are not the same.

"That doesn't accurately reflect what our community believes," Mr. Repsold said in a news article.

"Our" community? Was he speaking for you? Because he wasn't speaking for me, or for the people I know. Maybe he was referring to the people who came from outside the district to argue against the curriculum. Either way, the pastor and his cronies seem to be the confused ones.

The purpose of sex education is to teach kids about sex, sexuality and relationships. One goal is the delay of sexual activity until students are old enough to make responsible choices and handle the consequences. Get Real works for children: 16 percent fewer boys who took the course were sexually active in the eighth grade, and 15 percent fewer girls, according to the Wellesley Centers for Women. That's the value of offering a program designed by an affiliate of Planned Parenthood, a respected reproductive health provider and educator for 101 years.

Whose community thinks we shouldn't talk honestly with our kids about homosexuality (it's natural), transgenderism (ditto) and the importance of accepting others and themselves?

What we're teaching now certainly isn't working on any level. Kids are having sex, and abstinence education only makes the heart grow fonder. Also, teens who fall outside the cisgender heterosexual norm are suffering. Lesbian, gay and bisexual teens are four times more likely to attempt suicide than straight teens, the Centers for Disease Control says. The 2011 National Transgender Discrimination Survey cites "alarming" rates of school harassment and assault against trans students, and the 2015 U.S. Transgender Survey found that 82 percent of transgender people had seriously considered killing themselves — 34 percent before age 13, and 75 percent under 18.

Is this what Spokane wants for our children?

We also respect our children, and don't exploit them for political purposes.

Underneath all the manufactured hysteria lies the Get Real opposition's real agenda: driving voters to the polls. A school board election is coming this fall, soon after the board's October vote on Get Real.

This is not a conspiracy theory. Stephanie Cates, chair of the local GOP, said it in the press: "There are elections this year. I'm sure this will all play into that."

In my community, we don't let our children be used as pawns in political games. How about in yours? ♦

Sherry Jones is a Spokane novelist and executive board member of the Spokane Area National Organization for Women (NOW).

Will any candidate change the gag rule preventing most Spokane school board members from speaking to the media?

Change is coming to Spokane Public Schools. Here are the six candidates vying for three school board seats