We're at the airport in Chennai now. I'll be home in 40 hours or so, assuming everything stays on schedule, which sounds like an impossibly long time — but that's what it takes to travel to the other side of the world. I haven't been jet-lagged yet. It mostly just feels like waking up hungover for no reason. I feel like I'm starting to get the hang of this, but I'm also glad to be heading home.

India was good, but I don't know that I have anything interesting to say about it. My parents and I visited a lot of impressive, ancient stone carvings and temples. We saw paintings made thousands of years ago in temple alcoves and women dressed in all-red saris, hundreds of them, to visit other temples. We saw an elephant, but it was a small one with tired skin beside vendors selling trinkets, and I wish I hadn't. 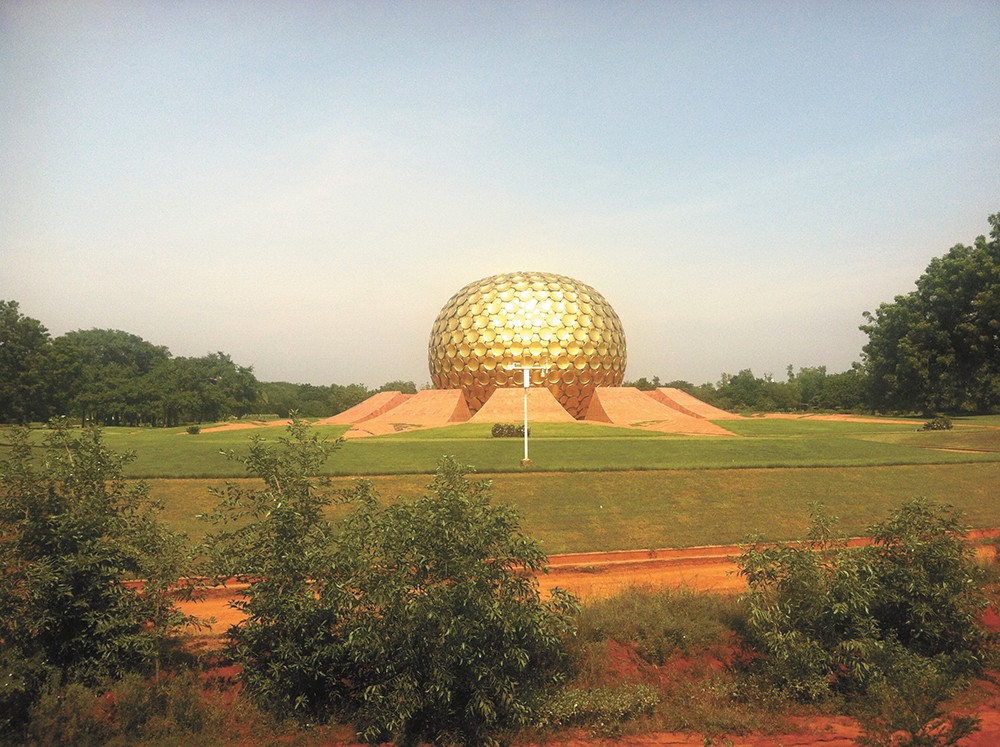 Lisa Waananen
The Matrimandir in Auroville.

It seems like most of traveling is stopping to look at things. And maybe that's the point, because that's one thing we almost never make time to do in our regular lives. It's like how people who are asked to sketch their own street — I think I read this somewhere — they get all kinds of details wrong. They go down that street every day, but they're never really looking at it.

The best part of the whole trip so far was seeing my little sister, and not just because that was the whole reason for going. I'd imagined her study abroad program as some sort of central campus with occasional trips to research sites, or something, but it's a lot more independent than that. She and her classmates scattered to different cities, moving every month or so and meeting up by rickshaw and bus on the weekends. Her notebook was filled with sketches of fish from a previous city on the coast. We flipped through at lunch one day and pointed out the "cute" ones.

You could see it in her face sometimes, just how much we were tourists. She'd tell us about eating with your right hand, and we'd eagerly ask questions — "Can you tear your bread with your left hand? Is it the same for Dad if he's left-handed?" — and then keep on eating with forks.

It seems to me you learn as much about living in a place the first day as you do in the following week, and as much in that week as in the next year. My sister was in the sweet part of the curve, where you feel comfortable in a place but still take delight in its strangeness.

I know that feeling, and maybe that's why everywhere we went in India just made me think of New York. It's been a year now since I left, but I lived in New York City once, for almost four years, and for some reasons that seemed like a very important fact as we walked down the rocky beach in Pondicherry or toured temples in Kanchipuram.

I never really tired of just seeing New York. Even something as simple as taking the subway to work day after day took on the beauty of a ritual — each morning, coming out of the tunnel onto the Brooklyn Bridge with the light glittering on the broad water of the harbor and the sky reflected in the glass of Manhattan skyscrapers. Each day One World Trade Center stood a little higher above the rest. They've finished construction now, but in my memory it keeps on rising.

People who love to travel must love that steep part of the learning curve. But these quick, hectic days in India only made me crave that part beyond the curve — that comfortable plateau where a place can more slowly reveal its rhythms and gems.

So I guess what I'm trying to say is: India was good. Now I know how much I haven't seen.

And if you're ever in New York, take the Q train into Manhattan right after the sun's come up and take a few moments — that's all it takes — to see that skyline for me. It won't be the same. But it will be worth it.♦