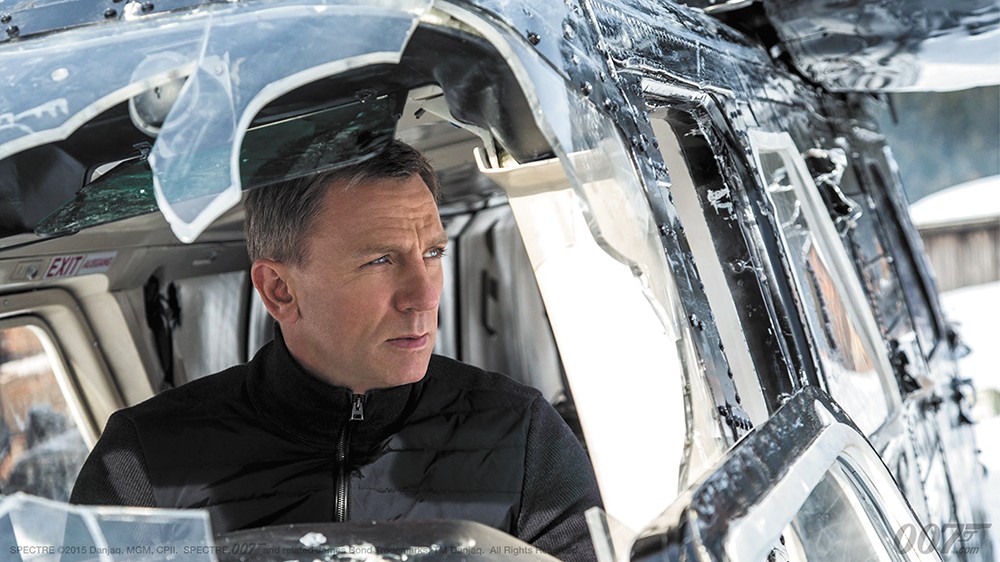 The opening gambit of Spectre —

the fourth outing in the reinvigorated-for-the-21st-century James Bond franchise — is absolutely spectacular. It begins with a long sequence in which the secret agent and a lady friend wend their way through raucous Day of the Dead revelers in Mexico City, through streets heaving with partiers, into a fancy hotel (where the party continues), up to a room. Then it graduates to authentically thrilling, as Bond leaps out the hotel window and across rooftops to do a Secret Agent Thing, and we are powerfully in the moment as Bond goes to work.

There is atmosphere to spare here, and humor, and action-movie grace. It's exhilarating. If this is how Spectre begins, what amazing goodies does it have up its sleeve for the meat of the movie? As it turns out, not much at all. Spectre never reaches that same pinnacle of movie-movie joy again; it's like director Sam Mendes steps out once the opening has unspooled, and leaves the rest of the movie to his understudy. The thin plot never catches fire, either. Underlying connections between all four films are laid out here... and Spectre only moves Bond backward. The earlier films actively worked to make room for a Cold War relic like Bond in the new global paradigm. Spectre throws that all away.

In the immediate aftermath of the events of Skyfall, Bond (Daniel Craig) has gone rogue, chasing hints of a big bad guy around the globe, while back in London, the new M (Ralph Fiennes) is battling with C (Andrew Scott), who is about to launch a new blanket electronic surveillance scheme that will replace the 00 program: something about drone warfare being more efficient than spies with a license to kill.

Apart from occasional explosions of not entirely undiverting action — the plane-versus-SUV game of chicken is mildly amusing — Bond's globetrotting and spycraft is dreary and perfunctory this time around: very little of the brains or verve of Casino Royale or Skyfall turn up here. There's nothing in the least bit surprising or unexpected about anything Bond uncovers on his journeys: if we are meant to be startled by the things he learns about the mysterious criminal organization called Spectre (we are offered no hint of what that name means) or its leader, Franz Oberhauser (Christoph Waltz), startlement fails to materialize.

Everyone might as well be enacting a Bond puppet show, which sometimes descends into ickiness, as in the sequence with Monica Bellucci. Her character is completely superfluous except as someone for Bond to mechanically bed, as if as part of a box-checking exercise for Essential Bond Scenes: they've barely met before they are engaging in the unsexiest grappling imaginable, and then her character is completely forgotten, never spoken of or seen again.

Of course the sex is as empty and as bloodless and as tween-friendly as the violence, which is a particular problem here, when there's nothing but old-school Bond sex and violence on offer. Yet little here works on the level of nostalgia, either. It just feels trite and tired. Which is a particular disappointment for a series that had, until now, avoided that trap. ♦

Spectre is not showing in any theaters in the area.

MET Live in HD: The Hours @ The Kenworthy