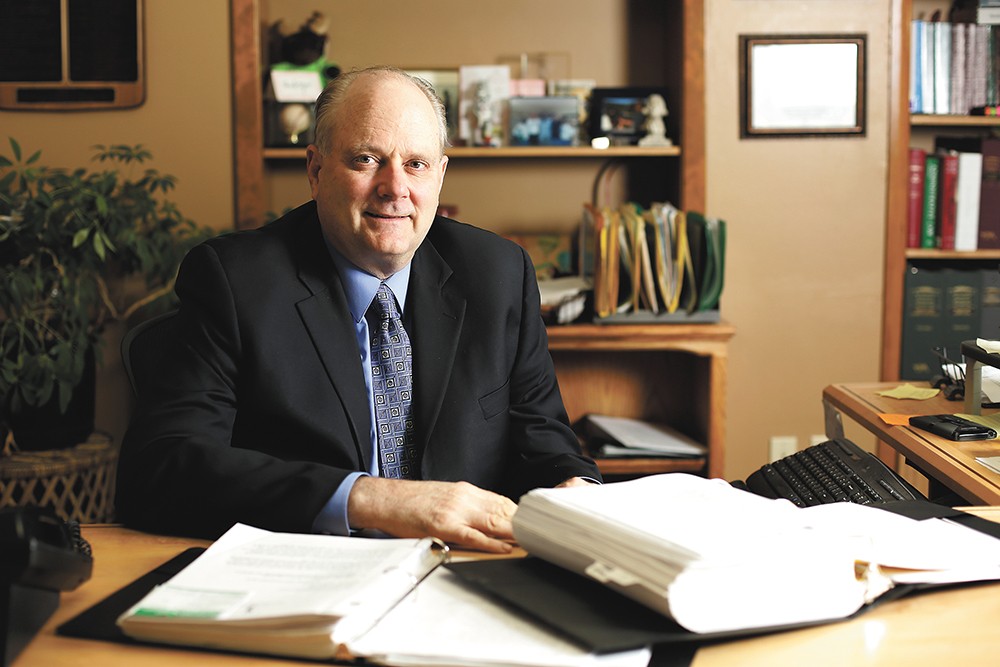 It works like this: You're in a terrible car accident. You're injured, maybe badly.

The cops arrive, swipe your driver's license to get state Department of Licensing data, then upload that information into the Washington State Patrol database.

The next day, someone from an attorney or chiropractor's office logs onto the Washington State Patrol website and buys more than a dozen accident records — including yours.

They use your name, your address and your accident details to send you an advertisement in the mail. It outlines exactly what happened to you. For a price, the mailer explains, you can get help.

So now, Sweetser is going the legal-action route: This week, he's filing a class-action lawsuit against the chief of the Washington State Patrol. It argues that the WSP is breaking federal law when it sells your accident information to people who plan to use it for marketing to clients.

"The state does not screen these requests," Sweetser says. "You are never told that your information is sold. The requests may be made by anyone. A crazy person. An ex-boyfriend. A neighbor. A stalker. Identity thieves. You name it. They've got your address, your telephone number and your full name."

That sort of thing has happened. In 1989, a stalker murdered California actress Rebecca Schaeffer after he got her personal information from a motor vehicle database. That's what the Driver's Privacy Protection Act, passed by Congress and signed into law by President Clinton in 1994, was created explicitly to prevent: DMV information can't be released unless it fits into a narrow series of exceptions.

And trying to find clients for lawsuits, the U.S. Supreme Court ruled in 2013, doesn't fit into those exceptions. That's why Sweetser is convinced that the WSP is out of line.

"They know it's against the law, and they have been told so repeatedly," Sweetser says in an email. "And they still continue to sell your very private personal information. This case will hopefully put an end to this practice."

Gretchen Dolan, spokeswoman for the Washington State Patrol, says the agency is in an awkward spot: It has to abide by Washington's broad public records act — requiring disclosure of nearly every public record, outside some narrow exemptions — without running afoul of the Driver's Privacy Protection Act.

"It's our position that it's on a WSP form now, it's not a [Department of Licensing] document," she says.

Dolan justifies the decision by pointing to a ruling in Illinois finding that cops can write down DMV information on parking tickets without it violating federal law.

"Until recently, [WSP accident record] forms were old-school, written out," she says.

It would be impractical, Dolan says, to suddenly have to redact personal information on accident records because drivers' licenses are being scanned and the information uploaded to the WSP database.

Ah, but read to the bottom of the federal appeals opinion in the Illinois case, Sweetser says, where it says that "had the Village been making the information on parking tickets publicly available over the Internet" the invasion of privacy would probably outweigh the value to law enforcement.

Sweetser comes armed with his own stack of precedents, arguing that the protections on motor vehicle record information don't somehow magically disappear when they leave the Department of Licensing and appear on an accident report.

This is not a new controversy. Sweetser references an email from 2005, where then-Washington state Rep. Toby Nixon raised concerns about a shadowy company viewing hundreds of accident reports and using them for marketing purposes. Nixon even attempted, unsuccessfully, to pass legislation banning state public records from being used for direct marketing purposes.

Now, however, Nixon is on the board of the Washington Coalition for Open Government, which would be very cautious about limiting access to public records.

"Maybe there's a badly designed intersection. You may want to contact other people who've been in accidents at that same intersection," Nixon says. "There are all kinds of arguments to be made for not closing this down."

Even before filing the class-action lawsuit, meanwhile, Sweetser has achieved a small victory. The primary target of his crusade has been Craig Swapp, a Utah-based attorney who was purchasing hundreds of accident reports every month in order to target potential clients. But in the months since the Inlander published its story, Swapp has stopped that practice.