A curious consideration of eating raw foods for the hesitant outsider 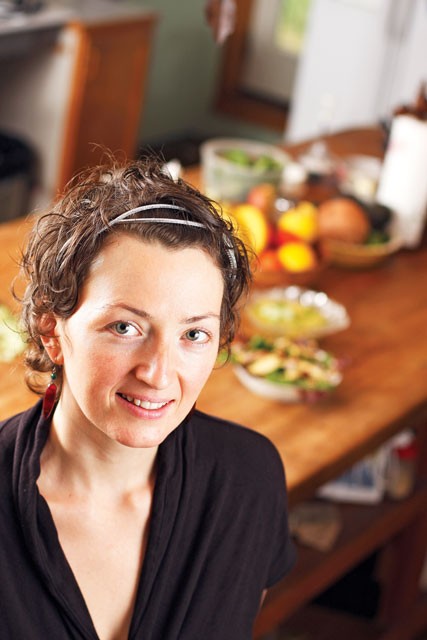 Sarah Edwards of Chakraw Living Foods, on her conversion to a raw food diet: "I felt better than I had my whole life."

Raw foodism isn’t an idiosyncratic cult fad. It just sits on the extreme end of common sense, which says natural foods with fewer synthetic ingredients are better for you.

Foodies aren’t going to forfeit taste without a fight, though. I, for one, like food that is cooked — waffles, tacos. And nobody wants to feel judged for eating a corn dog, much less a freshly boiled ear of summer-sweet corn.

“People who take it to the extreme kind of put a negative light on it,” says Nichole Desmond, a registered dietitian and nutrition coach at Eat This Nutrition Solutions in Spokane. “But it’s the idea that by looking at what we’re eating and putting in our bodies, you can make a significant difference in how you feel.”

Desmond says the uppity connotation surrounding raw food stems from a 1970s concept of the hippie parent pushing sprouted grains and wheatgrass on their kids.

“It’s just not like that anymore,” she points out. “The raw food movement is a real, alive movement, and there are a lot of people who really love food who are getting into it.”

Outside of nibbling on greens and handfuls of almonds, how is food prepared in the raw world? Cooking has the effect of blending flavors and changing food textures — effects that raw foodies imitate through soaking, sprouting, juicing, blending or food processing and dehydrating.

For example, soaking seeds and nuts in water for six or more hours helps make them easier to digest and draws the seed out of its dormant state. Soaked seeds (or nuts, grains, and legumes) are highly versatile — they can be used in a recipe, blended to create a sauce or dressing, or dehydrated to be eaten as a crunchy snack. While it’s not essential to have a food dehydrator, processor and blender, these appliances do help achieve a variety of textures and produce more appealing foods.

What’s the rationale for going to all this trouble to avoid cooking? Literature advocating absolute avoidance of cooked foods portrays cooking as a pillaging process, where innocent enzymes are brutally massacred and a frenzy of cancer-causing free radicals is brewed.

“Some of the vitamins can be heat-sensitive, but if that were true, we would see malnutrition, because humans have been cooking for a long time,” she says. “Our bodies have natural enzymes. We are set up for digestion.”

She mentions carrots, which see an increase in antioxidants when cooked. The same goes for cancer-fighting agents in broccoli.

“I think that when you lightly cook some foods, your body can actually derive more or as much benefit out of it,” he reasons, but adds, “I think when you overcook or over-steam, you’re going to lose some nutrients there.”

Brian Enriquez is the general manager of Thrive, a  raw foods store and café in Seattle. His personal testimony of going raw is subtly laced with the satisfied jubilance of someone who just got baptized. In the first three months, Enriquez says he lost 30 pounds eating two out of three meals a day raw.

“The difference in buoyancy, levity and the complete disappearance of fatigue was extraordinary,” he says of the switchover.

Like most humans with a full workday, Enriquez would get pooped around 1 pm. After going raw,  he said he’s like a hamster in a wheel.

“Now, it’s difficult falling asleep because my energy and excitement has shot through the roof,” he says.

“I felt thin, light, strong and energetic,” she says of the conversion. “There was a very noticeable increase in my energy. I felt better than I had my whole life.”

The biggest obstacle? Rebirth of the palate.

“In our society we have acquired a taste for dense sugar, salt and fat,” says Edwards.

This trend has caused our taste buds to change: hence the midnight forays for French fries. By ditching the processed stuff and eating more whole foods — raw or cooked, says Edwards — our tastes for simple, whole fare will magically return like the wayward prodigal son.

Enriquez concurs. “Your body is addicted to whatever it’s been eating,” he says. “It takes courage to ditch the comfort foods you’ve been noshing on since grade school.”

For him, at least, there’s no turning back. Not even a last glance.

“You can’t imagine what it’s like on the other side,” he blissfully asserts. “If you could, you’d be there. Trust me.”

Huckleberry’s library has a small section devoted to gourmet raw cooking. They have a juice bar, too. Chakraw’s Living Foods offers workshops; check out chakrawlivingfoods.com. And rawguru.com offers recipes, news, products and advice.

My interest in seeking fresher items with fewer additives and unpronounceable ingredients was triggered after sampling some surprisingly delicious raw snacks from several of Spokane’s natural living stores. Many of these are available at other natural foods stores in the Inland Northwest. Here are a few of my favorites:

Starbucks (most locations) TRY: Two Moms in the Raw Granola.