Two years and four investigations later, the death of 15-year-old Ryan Holyk is still being sorted out 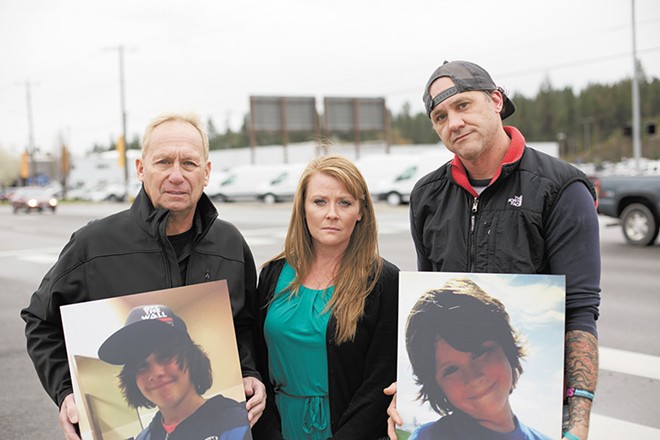 Some facts surrounding the death

of 15-year-old Ryan Holyk are virtually undisputed. Ryan was riding a bike without brakes, was not wearing a helmet and crossed into the crosswalk at Sprague Avenue and Vista Road against a light.

Deputy Joe Bodman was driving more than 70 mph without emergency lights or a siren. He swerved, trying to avoid the boy, and his passenger side tire blew out when he hit the curb to the right.

Sheriff Ozzie Knezovich continually points to "four independent investigations" into the events of May 23, 2014, all of which concluded that the deputy's SUV missed hitting Holyk, who died from severe head trauma after several days in the hospital. He suggests Ryan's DNA extracted from his skin cells found on the deputy's bumper is a result of contamination and asks why there isn't any blood.

"Ultimately, this incident would not have occurred if Ryan Holyk had stopped at the intersection and avoided crossing against the red light and Don't Walk signal," according to Jarrod Carter, principal member of Origin Forensics LLC, who reviewed the case at the sheriff's request. The sheriff's Citizens Advisory and Review Board recently came to similar conclusions.

• The "significant" amount of Ryan's DNA found on the deputy's front driver side bumper is more than one would expect to see from a secondary transfer or contamination, according to sworn testimony from Anna Wilson, the Washington State Patrol forensic investigator who ran the tests.

• Ryan's hat was found about 20 feet into the middle of the intersection, suggesting he was hit by the vehicle and then fell back over his bicycle, according to Mike Maurer, the attorney representing Holyk's family in their civil lawsuit against the Sheriff's Office.

• Investigators disregarded the DNA evidence based in part on a video analysis by Grant Fredericks, whose conclusions were at first rejected by investigators and later accepted, according to then-Spokane Police Detective Michael Carr's deposition testimony. Fredericks' work was previously called into question during the case of Otto Zehm, a mentally ill janitor who died after being beaten by an SPD officer.

"Even if you believe what the sheriff is saying, Deputy Bodman is still responsible for this accident," Maurer says. "If he was running lights and sirens, this doesn't happen."

After Bodman radioed to dispatch

that he "hit a pedestrian," he told Deputy Clay Hilton, who wrote one of the first reports of this incident, that he "heard his vehicle collide with Ryan Holyk."

But later, in a sworn deposition last November, Bodman concluded he hadn't hit Holyk, stating, "I assumed Ryan Holyk collided with my vehicle. After I hit the curb, my vehicle came to a stop, my first thought was I didn't hit him. I looked in my rearview mirror, saw him on the ground, and I assumed I hit him like any other normal citizen would have."

In the original story about this incident, the Inlander relied on a report from WSP Detective Sgt. Jerry Cooper, which incorrectly stated "No DNA or fabric was found" on the SUV. In fact, a "large amount" of Ryan's DNA was discovered on the driver's side front bumper in September 2014, according to results of a WSP crime lab analyst.

"Ryan and [Bodman's] vehicle were in close proximity," Knezovich told the Inlander last July. "There were firefighters, AMR, law enforcement, civilians all around. All it takes is one individual who had contact with Ryan to brush up and touch that vehicle to leave DNA on it."

The report released earlier this month from Origin Forensics suggests the transfer also could have occurred later when the bike and the SUV were being evaluated for damage.

Wilson, the WSP forensic investigator who extracted the DNA, says in a deposition that Bodman's bumper contained a "significant" amount of Ryan's DNA — an amount she would not expect to see from secondary transfer, as Knezovich suggested.

Wilson released these results to Carr, the lead investigator, on Sept. 3, 2014, and the WSP forensic investigator says Carr asked her if there was "any way there could have been a sample switch" — something Wilson says she's never been asked by a law enforcement official.

Carr, for his part, says in a deposition that he spoke with other officers to decide how to handle the newly discovered DNA evidence. Carr says they considered interviewing the first responders and witnesses to discover if any one of them could have contaminated the bumper with Ryan's DNA. However, ultimately Carr concluded that if he couldn't determine how the DNA got onto the bumper, that evidence wouldn't impact his investigation.

"You can't just chose to ignore DNA evidence," says Maurer, the family's lawyer. "Perhaps you can chose to diminish the other evidence, but when experts are telling you the only way it got there is by direct contact, you can't just not believe it because you don't like it."

Carr declined to comment due to the pending lawsuit.

Grant Fredericks' video analysis. In an email from Fredericks to one of the SPD investigators after he'd completed his review, he writes: "Normally we wouldn't worry about it at this point, but given your agency's position that it has rejected my findings and wanted the work redone, I'm concerned about the payment."

Carr says in a deposition he was instructed to vet other video analysts after the city hired Fredericks. Former assistant Chief Selby Smith, who retired late last year, was concerned about Fredericks' allegedly impeached testimony in Canada and his controversial involvement in the Zehm case.

Carr says he disagreed with Smith's assessment, and eventually Fredricks' analysis was allowed to stand.

It was that analysis, almost discarded, that Carr cites as another reason to dismiss the DNA evidence.

During his deposition, Carr recounts a scenario in which Ryan sets his bike down, and, still on his feet, turned around and was hit just as Bodman flew through the intersection.

"That was the only other scenario that ... would fall in line with the other evidence that was there," Carr testified. "However, with the assistance of Grant Fredericks' analysis ... that... didn't seem realistic."

That scenario, dismissed by Carr, is almost exactly what Maurer believes happened. "I don't believe Detective Carr went into it saying I'm going to cover this up," he says. "But I believe he went into it with a mindset in the face of overwhelming evidence to the contrary."

The civil trial to settle these issues for good is set to begin in August of this year. ♦