Two local artists have transformed their love of skateboarding into a new variety show on Community Television. 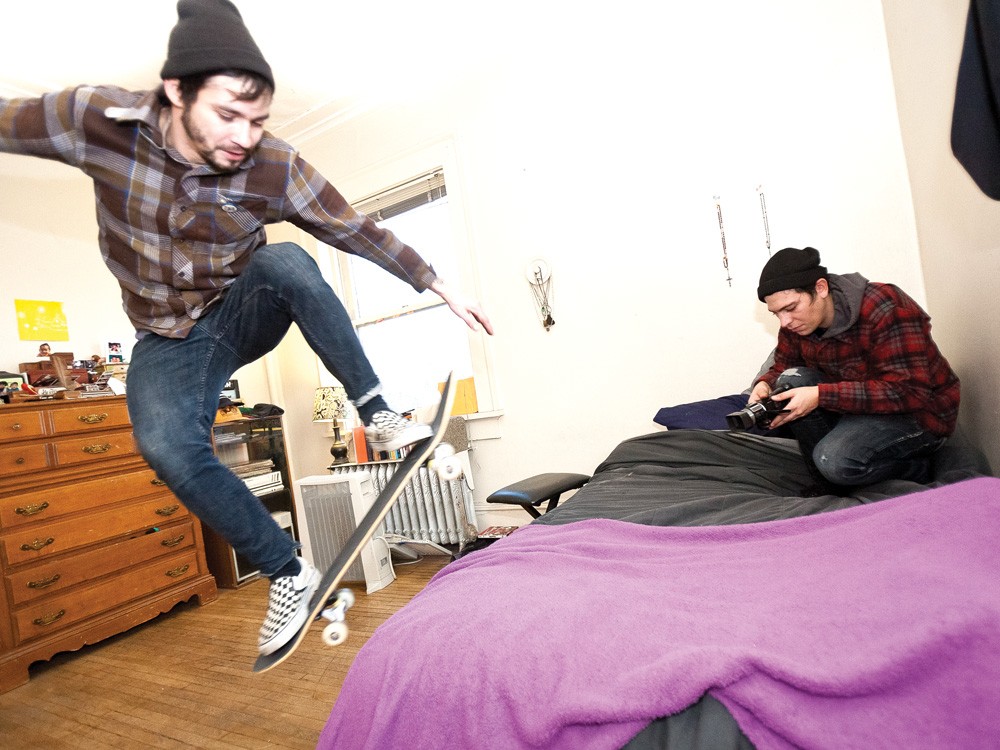 Skateboarding is often viewed as a vaguely antisocial — even outlaw — activity. But two area skaters are out to change that. Russell “Ruska” Williams and Matthew Winters have done more than bond over a shared love of skateboarding. They’ve pooled their talents (as videographer and musician, respectively) to create a new television show that throws the spotlight on area skaters, as well as local artists.

They’ve named their project RAMPS. And anyone can join in the fun by tuning in to Spokane’s Community Minded Television (CMTV on Channel 14) Tuesday nights at 10 pm and on Saturdays at noon. Episodes can also be found on YouTube using the search term “rampsisrad.”

“It’s a video magazine that showcases skateboarders, artists, musicians and events,” explains Williams. “We have a house band … and we donate ramps to places that need them.”

To produce RAMPS, Winters and Williams venture into the heart of the local arts and skate scenes with video cameras in hand, interviewing emerging artists and musicians and talking with organizers of area arts events. The footage eventually gets edited into a new 30-minute “issue” of the program.

“I’m pretty new to it all,” says Winters. “Russ has been doing this kind of thing for a long time. But I’d only been in the studio before to record music. I know countless musicians and artists in Spokane, and he knows skateboarding, and we kind of melded all of these things together.”

The genesis of the show, however, was anything but smooth. In fact, RAMPS emerged from desperation.

“We were both kind of in a dark place when we started,” says Williams. “We both had recently become single and Matthew was homeless. I had a place and I told him that ‘my roof is your roof,’ you know? We started helping each other out. He had a guitar and I had this cheap little video camera.”

“And I’m a ham anyway,” says Winters, who performs around town and on RAMPS as one half of the acoustic duo Team Growl. “So I was like, ‘Sure, I want to play.’”

It was then that RAMPS began to take shape.

Says Winters, “We started thinking, what if we have more people show up? What if we could feature more artwork? But it really started with a desire to see certain people play, film them and then watch that stuff together. We thought – why don’t we share this?”

Though they’ve finished just a single RAMPS show so far, Williams and Winters have just come off of an extremely productive month. Not only did they get their first issue (October) of RAMPS in the can but the duo also were instrumental in donating several fresh wooden skate ramps to the kids who frequent the oft-neglected UTF park (located under the freeway along Fourth Avenue, between Bernard and McClellan Streets).

“The ramps were actually donated to us by a friend, who started building them about the time we were kicking off the TV show,” says Williams. “He was super into it.”

They also have big dreams for upcoming issues. The ideas for future shows and projects spill forth from the pair in rapid succession.

“We have plans to take the show to the Tri-Cities,” says Williams. “Maybe even get a tour bus for the summer and take it to Portland and Seattle.”

“We’d like to get a bunch of blank skate decks,” adds Winters, “tag ‘RAMPS’ on them, and then give them out to kids in need.”

The pair even dreams that national TV will want in on the action.

“We want MTV to subsidize our lives,” laughs Winters.

“We really want people to realize that, you know, you’re not alone out there,” says Williams. “We’re here for you. And any creative outlet that you engage in, we want to showcase that.”

“RAMPS showcases the fact that there is art in everything,” says Winters. “There really are no boundaries.”

RAMPS airs on CMTV Cable Channel 14 on Tuesdays at 10 pm and Saturday at noon.