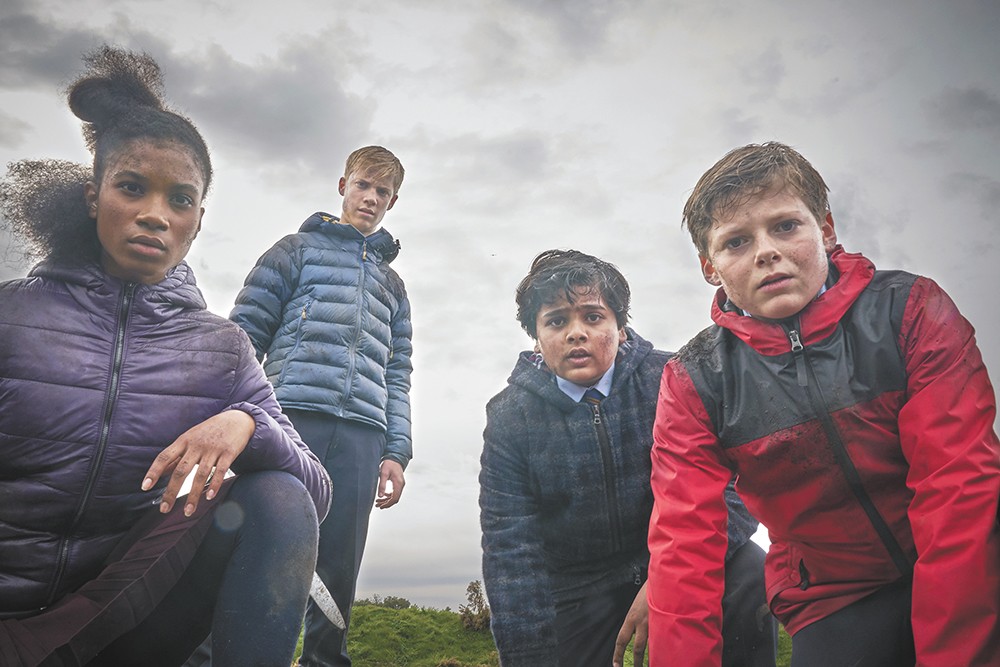 Alex must recruit his own Knights of the Round Table in The Kid Who Would be King.

Joe Cornish's 2011 debut feature Attack the Block effectively combined a fun genre adventure with some refreshing social realism, in its story of teenagers living in a South London housing project who fight off an alien invasion. Cornish's new film, The Kid Who Would Be King, is sort of a toned-down version of the same approach, a lighter, more family-friendly fantasy with only slight hints of social commentary.

It's not as bold a vision, but it demonstrates the same warmth and humor as Cornish's previous film, along with a throwback style that recalls 1980s-era tween pulp adventures like The Goonies. That genial vibe carries the film over most of its (somewhat overlong) running time, although the story never quite becomes as rousing as it's made out to be.

Part of the problem is that the kid himself, who's meant to be the fated leader of Great Britain (and possibly humanity), is a bit of a bland cipher. Alex (Louis Ashbourne Serkis, son of Andy) has the requisite Spielbergian back story about an absent father (he's lived with his single mother since his father left years ago) and is mildly bullied at school, but otherwise he's relatively undistinguished.

That doesn't stop him from being the only person able to pull the legendary sword Excalibur from the stone in which it's lodged, in the middle of an abandoned construction site. Soon Alex is menaced by supernatural undead knights, commanded by the evil sorceress Morgana (Rebecca Ferguson), who's determined to prevent the legacy of King Arthur from being resurrected.

To combat Morgana, Alex must recruit his own Knights of the Round Table, starting with his meek but enthusiastic best friend Bedders (Dean Chaumoo). Following King Arthur's example of turning enemies into allies, Alex also convinces school bullies Lance (Tom Taylor) and Kaye (Rhianna Dorris) to join his cause, and they set out on a quest led by the resurrected wizard Merlin, who now mostly takes the form of an awkward teenager.

Angus Imrie is very entertaining as the exuberant young version of Merlin, who casts spells almost exclusively via goofy hand gestures and expresses constant good-natured exasperation with the youngsters he must help to save the world (Patrick Stewart gives the older Merlin appropriate gravitas in a handful of scenes). Chaumoo is the standout among the four knights, capturing Bedders' mix of wide-eyed wonder and sheer terror at the group's mission, but the other three never really rise above their stock characterizations.

That may be partly by design, since Cornish fills the dialogue with direct references to other well-known chosen-one quest narratives, from Star Wars to Harry Potter to, uh, Percy Jackson. The movie embraces the familiar devices of those stories while also occasionally subverting them gently, especially in Alex's fixation on finding his father. Likewise, Cornish incorporates most of the expected elements of the King Arthur story while making them work in a contemporary setting, pulling off a better King Arthur reimagining than Guy Ritchie or Antoine Fuqua have managed in big-budget studio efforts over the last 15 years. He handles the action set pieces (with some strong, judicious use of special effects) just as well as the lively little comedic moments.

The message about the need for modern-day knights in a world that has lost its way only comes across sporadically, and Alex's family issues get resolved a bit too neatly. The story also drags as it heads toward the two-hour mark, and Morgana turns out to be an underwhelming villain, despite Ferguson's formidable presence. Kids probably won't mind too much, though, and as long as the movie can reach that audience, it's done its job. ♦

The original print version of this article was headlined "Kid Power"

The Kid Who Would Be King is not showing in any theaters in the area.