The latest from Interplayers asks what it means to laugh, to be normal, to be broken.

Event: Boys Next Door At Interplayers thru Oct. 8 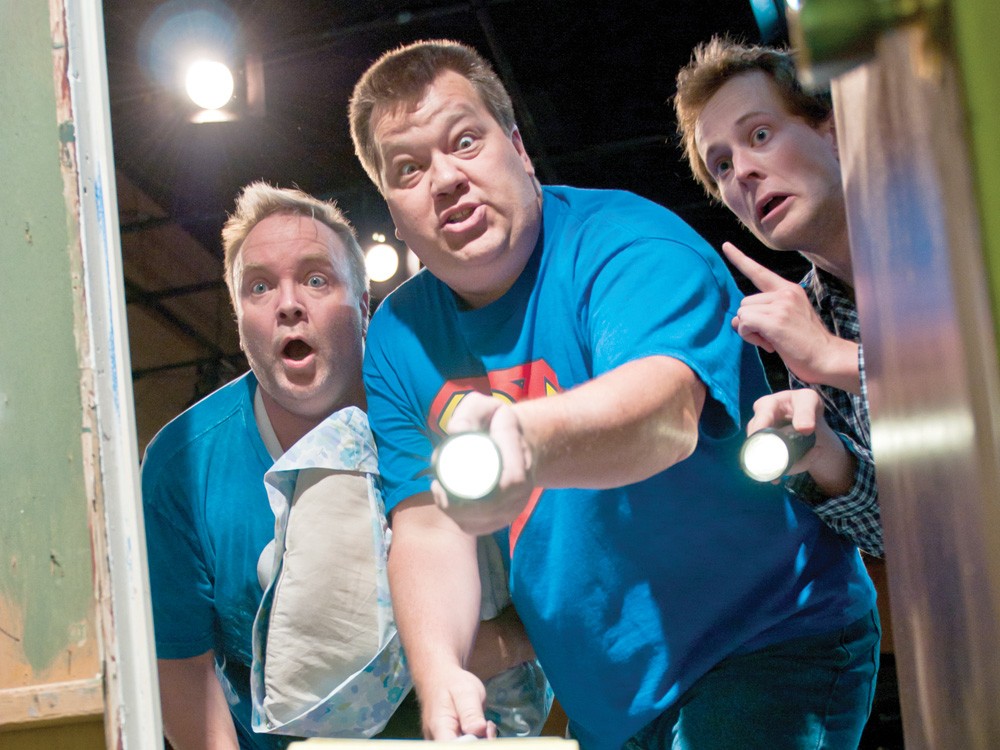 Amy Hunter
'Boys' sheds light on how we think of our fellow man.

They're so odd, these people around you. They have such weird habits — always going on and on about their own lives, their own needs. Everyone seems trapped in their own little worlds.

But then there’s the four developmentally disabled men in Tom Griffin’s The Boys Next Door — they don’t come with lots of emotional baggage and responsibilities. They’re fairly easy to get along with. They’re just regular folks who, like the rest of us, seek protection and nurturing and love.

Which is the main point of Griffin’s seriocomic play. A lot of routines in Boys — the physical comedy, the misapprehensions and crossed purposes— derive from sitcoms, and we laugh right along, pausing only briefly to consider whether we might be laughing at these men instead of along with them. Soon enough, the unaffected acting in director Troy Nickerson’s cast gives us permission to laugh at the humanity — the really odd bits of humanity — that are on display.

There’s the talkative-compulsive one. There’s the one who’s just a big teddy bear obsessed with Spider-Man. And the schizophrenic who really believes that he’s a golf pro. They all live in a group home, and as the social worker who supervises them, Rick Rivera has an easygoing quality that helps with all the expository narration that his character is called upon to deliver. Rivera’s character has moments of anger that seem under-motivated, both in the script and in the performance, but he wisely avoids overplaying the sentiment in some of the concluding scenes.

Both acts simply stop instead of concluding. Mostly that’s the fault of Griffin’s 1987 script, a plotless collection of blackout scenes that doesn’t do enough to spotlight its emotional emphases. We’ll be laughing along, and then suddenly something devastating or non-naturalistic happens, and we’re left wondering how important it was. Nickerson’s direction doesn’t do nearly enough to punctuate the act-ending scenes. It’s jarring when the lights go up and audience members aren’t sure why.

Those sequences when characters step outside themselves or undergo psychic trauma require clear emphasis, because they delve to the heart of the matter: These men may be childlike, but they’re more than just boys. Each of them is more than just his disability.

Todd Kehne, for example, plays Arnold, the home’s ever-fretting resident with compulsive self-grooming, verbal tics and oddball interpretations. But Arnold also offers the same kind of differentperspective reasoning that sometimes, in other contexts, is hailed as innovative, out-of-the-box thinking. Kehne conveys how goofy but earnest Arnold is.

More than anyone in the show, David Gigler’s Norman exhibits his comfort in routine and regularity. He relies on rote phrases and treasured knick-knacks to keep his world in order.

As the lovable teddy bear, Lucien, Jhon Goodwin’s finest moment occurs when he comforts another disconsolate resident by clamping a paw onto the side of his friend’s head and bestowing him with an awkward but well-intended hug. (As with children, these man-boys are so stuck in their own mental tracks that it becomes all the more gratifying when they display empathy.)

Ron Ford adds a cameo as one of the men’s vulgar, self-centered relatives. When a parent can be so selfish and his son so generous, who’s to say that a cognitive deficit is the worst of all disabilities? Maybe we should develop a diagnosis and treatment for having a stone-cold heart.

Because there’s a lot more to each of us than just our worst flaws.

If our laughter, instead, is ha-ha, what freaks, the play has failed. But Nickerson’s production, sprinkled with moments of compassion, is filled with moments in which we recognize our own foibles and weaknesses in the boys next door. It provides an enjoyable reminder that the developmentally disabled aren’t a breed apart.

We all have our defects. Some disabilities are just more apparent than others.