Minimalist shoes motivate your feet into doin’ what comes natur’ly 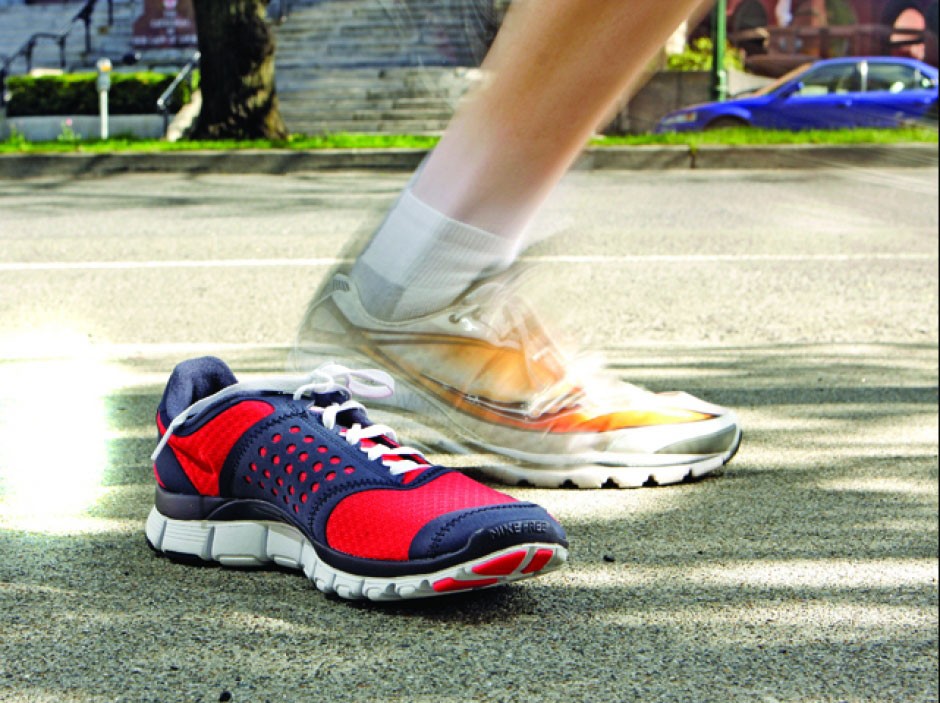 Running barefoot is like backyard nudism: It’s definitely not for all seasons, and the neighbors are going to stare.

Still, the latest curiosity in running involves doffing your shoes altogether. And maybe all those high-tech running shoes — with their thick padding and stiff arch supports — have gotten us out of touch with Mother Earth. Here are two examples of barefoot-like running shoes (and some of their features).

The fifth incarnation of the Nike Free has “barefoot-like flexibility.” Deep-groove siping makes it bendable from stem to stern: You can almost roll it up in a ball.

According to Nike, the midsole “provides just enough support while still allowing the foot to move in a natural, dynamic and barefoot-like manner” — and in fact, the Free has more torsional stability (when twisting the shoes from side to side) than you might expect.

Nate Kinghorn, manager at the Runner’s Soul in downtown Spokane, describes the Kinvara as a “neutral running shoe that allows your foot to run uninhibited.”

The Kinvara has a dropped heel (mimicking the footprint that beach runners leave in wet sand). While conventional running shoes raise the heel by 24 millimeters (nearly an inch), the Kinvara lessens that almost by half. (It’s a Birkenstock for people in a hurry.)

With a conventional running shoe, you land on your heel first, then the midfoot pronates and you cycle through your stride. When running in barefoot-like shoes, your posture is more upright and you take shorter, more frequent strides.

Blame it on Born To Run. A year ago, Christopher McDougall published a book recounting his exploits with the Tarahumara Indians of northern Mexico, who run up and down rocky canyons, literally all day and all night, sometimes for hundreds of miles —  in thin sandals or even barefoot.

Or blame it on technobabble. Browse through running shoe companies’ catalogs, and after awhile, all that talk about “graphite rollbars” and “HydroFlow technology” starts to sound like so much baloney. Our ancestors were sprinting across the savannah like gazelles long before Bill Bowerman started pouring rubber into waffle irons. Do I really need to run with a “Midfoot Support Bridge”?

Or maybe it’s an offshoot of the simplicity movement. What could be greener or more organic than running with the feet that nature gave us, and nothing more?

Whatever the impetus, you might say that it’s gaining some traction, this idea of running barefoot (or in barefoot-like shoes).

In a sport that clearly risks repetitive-use injuries, barefoot running has the advantage of altering your stride and strengthening new muscles.

With conventional padded shoes, your heel is the first thing to hit the ground (with a force something like two or three times your body weight). When you run barefoot (or with minimalist shoes), your posture is more upright, your strides are shorter and more frequent, and most of the impact is absorbed by the midfoot and balls of your feet.

Mark Plaatjes — a physical therapist who has run a 2:08 marathon — points out on the Boulder Running Company’s Facebook page that long-term studies on the injury rates and strengthening effects of both regular and barefoot running are simply lacking. (He also has a simple stand-on-one-foot test that, he claims, demonstrates that two-thirds of runners should not attempt barefoot or minimalist running.)

With a less rigidly structured shoe (or no shoe at all), foot and leg muscles stabilize and strengthen in different ways. But that’s not what has made the Vibram FiveFingers the buzz-getter at races. It’s the way they look. After the jokes about lizard feet fade away, what a Vibram-wearer is left with is increased road responsiveness. Her toesies are safely padded, each in its own little holster.

The Vibrams are so popular that it’ll be months before you’ll be able to buy a pair in the Spokane area.

In the meantime, you could try running in your naked feet — slowly at first, easing into it, gradually making it an occasional part of your running routine.

Just be prepared for all the quizzical looks.

Comfort on the Course