The area's only mosque searches for a leader, while others worry about an increase in anti-Islam sentiment 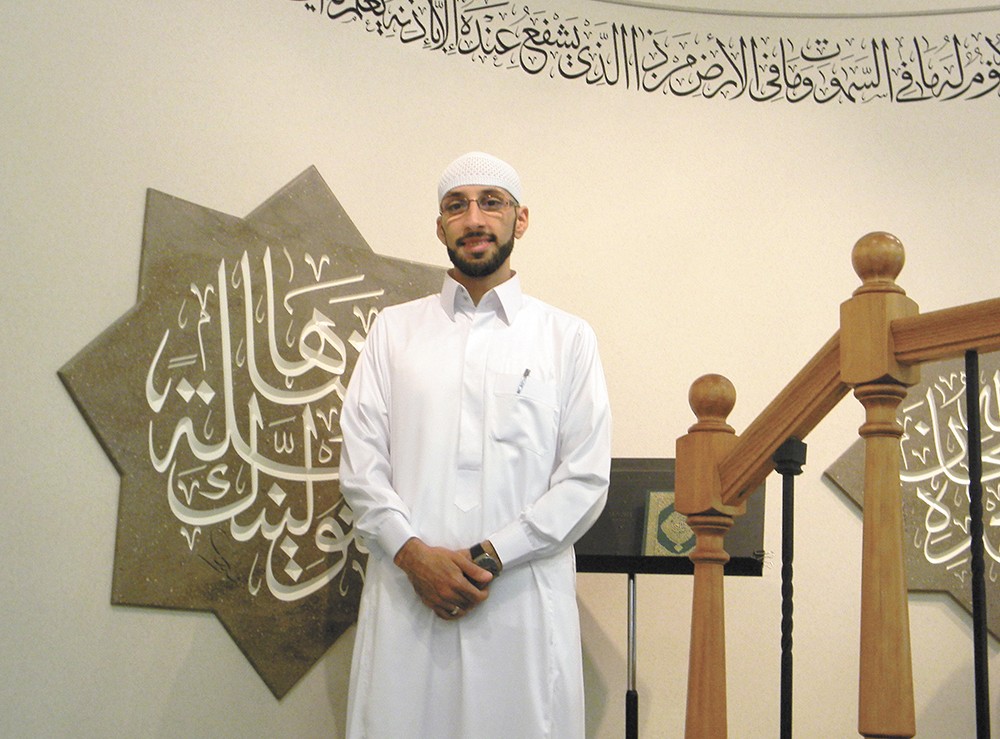 Jake Thomas
Yasser Shahin recently stepped down as imam at the Spokane Islamic Center. Replacing him will be a challenge.

Shoes come off as the faithful enter the Spokane Islamic Center,

a mosque located just off Interstate 90 in Spokane Valley. Worshippers greet each with "assalamu alaikum" ("peace be with you"), a handshake and "how are your kids?" before shuffling into the prayer room for the service held every Friday (Islam's holy day).

Some attendees, here are on their lunch breaks, wear tucked-in dress shirts and smartphones clipped to their belts. Some wear traditional skullcaps, while others wear backwards baseball caps. There are Africans, Bosnians, Arabs and Southeast Asians who've all come to hear today's "khutba," or Islamic sermon.

The service begins with Saleh Elgadi, president of the mosque's board, telling those assembled in the prayer room to be civil — and offer water on this hot day — to the woman standing outside of the mosque holding a sign that reads, "I serve a risen SAVIOR Jesus Christ! Muhammad is DEAD."

Today's prayers aren't led by an imam, the traditional spiritual and community leader of a mosque, but instead by a Syrian refugee, who has limited English skills but the pipes to belt out a prayer in Arabic, a language everyone here has at least some familiarity with. The mosque's imam stepped down recently, and it's not clear when there will be a replacement.

With a shortage of individuals who have the unique qualifications to lead these cultural and social hubs, finding a replacement for the Spokane area's only mosque will be a challenge, one that comes at a time of increased concern that anti-Islamic sentiment in the region is on the rise.

, I am not the best among you by far," says Yasser Shahin, sitting on the floor of the prayer room at the mosque, where he recently ended a two-year stint as its imam to concentrate on an MFA program in screenwriting. "I am the best for you –– right now."

Shahin –– who wears a neatly trimmed beard, a kufi hat and white thobe, a robe-like garment worn by the prophet Muhammad –– says he felt compelled by his religion to apply for and take the job in 2013 after the position had sat vacant since the center's current location opened in 2009.

Mosques unable to find imams are common. According to Ihsan Bagby, a professor of Islamic studies at the University of Kentucky who authored a report called "The American Mosque 2011," less than half of mosques in the U.S. have paid full-time leaders.

Elgadi, the mosque's board president, says it's also a challenge to get an imam to come to a city like Spokane, one that doesn't offer full-time Islamic school, halal restaurants or international grocers. The center will advertise in AlJumuah magazine for the position, according to Elgadi. He wouldn't say how much the position pays, but noted that it includes housing. In the meantime, he writes, the mosque will stay afloat through volunteers.

Before becoming Spokane's imam, Shahin, a 32-year-old Palestinian refugee, got his start by leading prayers in Amman, Jordan, when he was 14. He has developed a haunting singing voice he uses to deliver prayers in Arabic. His family immigrated to Seattle in the late 1990s, where he served as an imam before enrolling in Eastern Washington University's film program in 2013.

As imam, Shahin would rise well before dawn, head to the mosque to lead morning prayers and return later for evening services. On Fridays he would deliver the khutba and teach Sunday school. He gave lessons and advised the mosque's roughly 700 active members, hailing from 56 countries, on how to navigate conflicts that arise in a culture permissive of drugs, tattoos, fornication and alcohol.

"They are sort of like the light," says Admir Rasic, a 26-year-old Bosnian immigrant and member of the mosque, of imams, who he says help organize life at the center, from educational events to games of soccer.

At the Spokane Islamic Center

, Arsalan Bukhari greets people showing up for Friday prayers before handing them a flyer for an event he's holding in Spokane the next day. Staff from the governor's office and City Council President Ben Stuckart will be on hand. The topic will be how to engage elected officials and the media. One man asks how many people he's allowed to bring.

"As many as you can bring," replies Bukhari.

Bukhari, executive director of the Washington affiliate of the Council on American-Islamic Relations, says that his organization, which advocates for the civil rights of Muslims, is expanding its reach to Spokane.

He says that this expansion comes at a time when CAIR is fielding more calls from Muslims who say they've been denied public accommodations or been harassed in Washington. In 2014, he says, his organization received 400 complaints, up from the 280 received in 2012. So far this year, it's received 300, and could be on track to outpace last year.

CAIR received one report from Spokane in 2013, none in 2014. But in February 2015, Bukhari's office received a report of Ku Klux Klan flyers including an anti-Muslim diatribe being distributed in a Spokane Valley neighborhood. The same month, CAIR received a report of a Muslim woman being accosted by a man who lobbed slurs and threats at her while she was picking up her kids from a bus stop. In July, someone spray-painted "Death to Islam" on the Bosnia and Herzegovina Heritage Association of Spokane's building.

"It was scary, obviously," says Rasic, who saw the graffiti and remembers having dreams of people attacking the association. "It was the worst for the children who could read it."

Bukhari says that CAIR's enhanced outreach in Spokane may account for the increase in recorded incidents, but he also points to a Washington Post article that found that anti-Muslim hate crimes nationally have been five times more common following 9/11.

Locally, Washington state Rep. Matt Shea, R-Spokane Valley, has said that "Islam is not a religion, it is a theo-political construct." Idaho Rep. Vito Barbieri, R-Dalton Gardens, has described Islam as a "threat" to America's way of life.

Shahin says the most significant incident he experienced in Spokane was when he was fueling up his car, with his kids in the back, when a man threw his drink at him and told him to go back to his own country. But neither he nor Elgadi, president of the Spokane Islamic Center's board, are concerned that incidents like this will hamper recruitment efforts.

"Our larger Spokane community is very awesome and friendly," Elgadi says by email. "People notice that very readily when they come for interviews or visit."

Friday service has wrapped up

at the Spokane Islamic Center. Some go back to work or off to lunch. Others engage Christine Weick, the woman holding the provocative sign outside. Three women wearing headscarves tell her that Christians and Muslims don't really disagree on that much. But Weick says they disagree on one crucial point.

"When you stand before that God," she says, "Jesus, who was on the holy cross, will be there."

They agree to say prayers for each other before the women walk away.

Weick, who has been conducting demonstrations like this across the country for three years, has been described as a "folk hero" by the right-wing website WorldNetDaily for disrupting a Muslim prayer service held at the National Cathedral in 2014.

Bukhari is familiar with her work and approaches her. He gives her his card and the two chat politely. As Weick leaves, a man rushes out of the mosque to offer a bottle of water, which she graciously accepts on a hot day. Other times she's done this, she says, have been more confrontational. But not this time.

"Your mosque is great!" she exclaims as she walks away. ♦