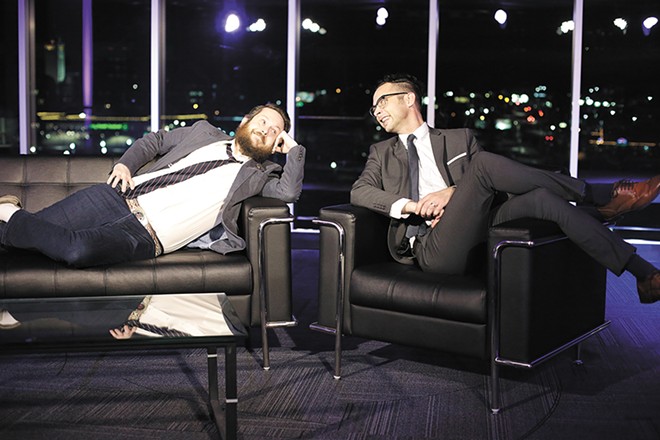 The monthly Spokane "late-night" talk show will feature three winners from the Inlander's Best Of readers poll at the Spokane Library's downtown branch at 8. Doors open at 7 pm.

Expect the show's usual comedic weirdness, including a "Spaghetti Factory Musical" from Aaron Fink and "Randy Savage: A One Macho Man Show," show host Ryan Tucker says. Live sketches will also include some of our Best Of categories, like Best Baby Doctor, he says.

About the Best Of guests:

Sean Gray photo
Jango believes the local hip-hop scene is breaking through: "People are listening."
JANGO, Best Hip-Hop Artist
In a way, there are two Elijah Kilborns — the magnanimous 23-year-old who loves spending free time with his family, and the hip-hop rhyme slayer who dominates local stages as Jango.

While sipping a beer at the bar in Central Food, he says he's starting to enjoy that newfound freedom a little bit more, but he's still hard at work on new music. Singles will likely be dropping throughout 2019, and there's also a longer project in the works. Because he's something of a perfectionist, he doesn't just want to throw stuff up on SoundCloud hours after recording it. Whatever's next has got to be just right.

Kilborn has a team of producers and publicists, as well as some regional brand sponsors, behind him, and he says he's starting to see other Spokane artists taking their work more seriously.

MARSHALL McLEAN, Best Singer-Songwriter
Marshall McLean has made quite a name for himself in Spokane, but he's also found striking success on a much larger scale. And how couldn't he? His keen ear for folk melody and strong songwriting skills make Spokane proud to say he's our Americana sweetheart.

KAITI BLOM, Best Barista
A mainstay at the South Hill gem Revel 77 since their inception in 2012, Kaiti Blom has made coffee her life. Not only has she spent the better part of a decade perfecting her skills at the aforementioned Revel, she's also opened her own coffee shop in downtown Spokane, the cute and impeccable Spaceman Coffee. It should be fairly obvious that she knows what she's doing.