Beyond the Village lies quirky local businesses, beautiful vistas and one spooky story

Isaac Handelman
There's much more to this South Hill neighborhood than its familiar shopping center.

For many, the image of Lincoln Heights is irrevocably tied to the shopping center that shares its namesake. When Trader Joe's opened its doors there in 2011, its adjoining businesses were given facelifts. Since then, almost every storefront in the village has been renovated to match the center's new, 21st century aesthetic. Today, Lincoln Heights Village bustles with busy shoppers, some eager to munch on classic burgers at Hogan's, others looking for canine supplies at mainstay Petco. But there's more to Lincoln Heights than just its signature, titular shopping village. The neighborhood has other sights to see, places to go, and stranger stories to tell.

Across from Lincoln Heights Village on 29th Avenue is Miller's Hardware, a South Hill staple that's been around for more than 50 years. Its unassuming exterior gives way to an entryway bearing 25-cent candy machines as well as a tightly organized, no-frills interior, where cigarette smoke from yesteryear has stained some of the walls a pale, permanent yellow.

"I'd say probably 80 percent of our customers are regular," says Damon Pollock, who's been the store's supervisor for six years. "Every now and then we get a new one, somebody that moved up here that just found the location, and they end up being repeat customers. [I'm on a first name basis with] a lot of them."

Pollock believes that stellar customer service has allowed the locally owned joint to compete with larger chain stores. "I grew up with it. I used to come with my dad," Pollock reminisces. "This store's been around and endured a lot, and I don't think we're going anywhere."

Turning off of 29th and driving down Ray Street, it's difficult to miss the signs with bright yellow text proclaiming the existence of Owens Auction Gallery on 17th Avenue. Owner Jeff Owens hosts a single two-day show every month, with around a thousand people packing in each time. Some are there to bid on items in the gallery's vast inventory, and some just come to watch, privy to this underappreciated form of free weekend entertainment. Most are locals, but Owens also pulls in bids from participants who hail from Idaho, Oregon, Montana, even Canada.

Employee Josh Erickson shows me around the gallery. Its current inventory looks fairly stocked with antique furniture and quirky items like a recently sold pinball machine. But Erickson tells me it's actually nearly empty, with more items coming in soon.

As for what those items are — well, just because the gallery has been around for a while doesn't mean its owner is resting on his laurels. "We had to measure the doors this morning because Jeff's in talks about consigning a Kubota tractor," Erickson says. "He wants to see if he can fit it in the building."

Owens, the owner, thinks the gallery has become a neighborhood fixture since moving to this location five years ago.

"You get a lot of people coming in there because it used to be the grocery store that they shopped in. When they were growing up, that was where they bought all their candy," he says. "You see a lot of the same people. Friends bring friends in because they had such a good time last time. People wanna know, 'Gosh, where'd you get that?' 'Oh, I got that at Owens Auction.'" 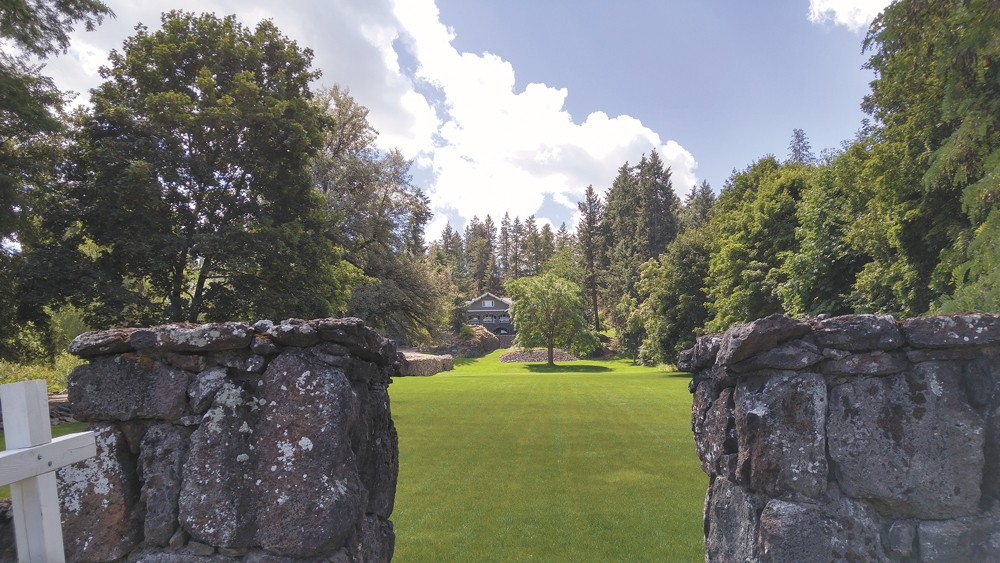 Isaac Handelman
The sprawling Wilbur-Hahn estate boasts a colorful and spooky past.

Just across the street from Franklin Elementary School on 17th Avenue lies a sprawling, grassy property crawling up a small hill toward the storied Wilbur-Hahn House. From 1924 until 1945, the 1916 Craftsman was owned by Rudolph Hahn, a documented eccentric and experimental physician who performed electrotherapy procedures and under-the-table abortions in the basement and the surrounding passageways he commissioned in his residence.

In 1940, an intoxicated Hahn called the police to notify them that his wife, Sylvia, lay dead in her bedroom of a gunshot wound to the head. Police ruled the death a suicide, unable to prove any action on the part of Hahn, despite a history of violence between the couple and a smattering of bullet holes on the walls of the room where Sylvia died, according to news reports.

Today, the mansion is quiet. A mossy fountain decorates the circular driveway on the house's posterior side, and a staunch bulldog stands near the garage, gazing warily out at potential trespassers. Onlookers are likely a too-common occurrence; the house is beset with accusations of hauntedness dating to when the house sat empty during the 1960s and 70s, with reported ghastly screams from the basement and a ghostly woman's figure on the stairway. From the outside, though, the place remains tucked away and unassuming, despite its bizarre history — elegant, mysterious, and passed each school day by scores of unknowing, carefree students on their ways home.

Slinking north of the Wilbur-Hahn House past Franklin Elementary school and down Mt. Vernon Street takes one into a residential section of Lincoln Heights. Just behind the school, a huge, volcanic boulder juts out of the suburban landscape. The rock serves as a quiet reminder of the neighborhood's once-rugged terrain.

Continuing down the street, lean pine trees shoot skyward, dwarfing the residences and cloaking them in inescapable shadow. Mt. Vernon gives way to South Altamont Street, and the modest houses still dotting the block's east side now face several old-style, nearly mansion-sized homes on the west side of the street. Vast properties lead up to some of these houses, whose painted wood exteriors stare out from their placements deep in the yards. Among them is the Lindsley-Larsen Estate, a 1914 construction now on Spokane's historic registry. With its grand simplicity, it looks straight out of the colonial era.

Further on, where Jacques Street converges with Ninth Avenue just above the Ben Burr trail — the very outskirts of Lincoln Heights — an oddly shaped corner home gazes out on a far-reaching view of Spokane. "We're sort of off the beaten track," says Connie Ramsey, the resident of the corner house for the past 25 years. Her next-door neighbors have been there even longer. Ramsey appreciates her close proximity to amenities, but loves the simultaneously secluded nature of the neighborhood. "Just one street has such a view," she remarks.

Below, cars shoot by on I-90 in colored blurs, barely visible through the treeline. The city's gaunt, concrete industrial towers are plainly visible rising up northeast of downtown. They fail to top the majesty of the rolling, pine-wooded hills flanking the urban sprawl. ♦

Established: Partially annexed by the city in 1891; fully annexed in 1907.