Working to keep kids from drinking 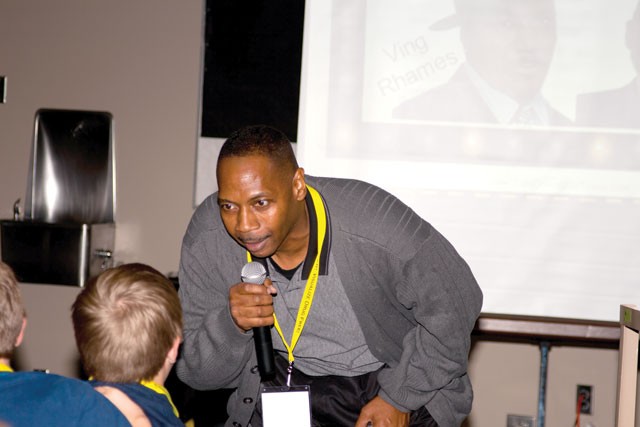 Cameron Crouc
Jill Dickson and Dennis Mitchell talk to kids at the Youth Summit at North Central High last month. Middle- and high-school student leaders from across the region came to help in the effort to keep classmates off alcohol, drugs and tobacco.

There are lots of ways to get access to alcohol when you’re a teenager: a house party, a parent’s liquor cabinet, an older sibling. Take some shots, play a drinking game — getting drunk is easy.

Eilish and Ainslee Bessmer grew up knowing about Mothers Against Drunk Drivers and Students Against Destructive Decisions. They choose to volunteer for Washington Drug-Free Youth. WDFY offers an incentive to students in grades 6-12 to “become or remain drug-free through positive reinforcement.” Eilish and Ainslee are two of the 1,700 anti-alcohol advocates in the Spokane area (there are a million DFY members nationwide) whose main responsibility is to mentor younger students.

“I think the coolest part is going to middle schools,” says Eilish, a high school senior. “Just having those kids look up to me, and helping them make smart decisions … I like being a role model.”

“I tell the kids you don’t need to drink,” says her 15-year-old sister, Ainslee. “You can have fun with just you and your friends.”

“Teenagers don’t understand the big consequences” of partying, says Eilish. “If you’re in sports, you can get in really big trouble, plus it’s not healthy. They don’t realize they can actually be hospitalized for alcohol poisoning.”

“Setting and accomplishing goals lets you know what you want in life,” Ainslee says, and that’s the message she wants to get across to younger kids. “It doesn’t matter how popular you are, as long as you’re happy with yourself.”

“I think being a part of sports and being involved in your school helps you stay sober,” says Eilish. “This year I’m on varsity soccer, and when we played Mead, we were so close in the end. It was the best feeling ever. That’s a way better high than smoking or drinking.”

“I’m in varsity track,” adds Ainslee, “I feel the same way about having a good race.”

Bonnie Ducharme, Spokane Public Schools’ support services coordinator, confirms the theory that school involvement can guide students’ choices outside the classroom. “There is a correlation; we call it ‘bonding to schools,’” she says. When students are engaged and bonded to their school in some way, there’s usually a decrease in drinking and drug use. “For many kids, that bonding happens in after-school activities like sports.”

Part of Ducharme’s job for the past three years has been managing Spokane’s piece of the 2007 Grants to Reduce Alcohol Abuse. GRAA are federal grants that have paid for specialized substance-abuse counselors and a prevention curriculum used in middle- and high-school health classes.

“We want to increase the number of kids who disapprove of drinking,” she explains. “Because alcohol is legal, people don’t see it as a significant problem. We want to change students’ perspectives. Forty percent may be drinking, but 60 percent aren’t.”

“We call it ‘social norms’ marketing,” explains Alan Zeuge, Spokane County Community Services’ prevention coordinator. “The norm is actually to not use.”

There are plenty of messages, images and perceptions for young people to resist — not just in school hallways, but also in primetime TV shows and magazines. The Federal Trade Commission, the surgeon general and, most recently, the American Academy of Pediatrics have all called for restrictions on alcohol marketing and product placement.

“The dollars that go into alcohol advertising far exceed what government services can spend [on prevention and treatment],” says Zeuge. “We challenge young people to analyze those alcohol messages.”

WSU professor Dr. Erica W. Austin has studied the effectiveness of media literacy, including training grade-schoolers to see through the hype — which often includes celebrities and slick editing — in advertisements. The goal of media literacy is to “empower them to resist messages that encourage alcohol and tobacco use,” says Austin. “Children need to understand early on that these messages are not always developed with their best interests in mind. Children must and can learn to discount appeals to their emotions.”