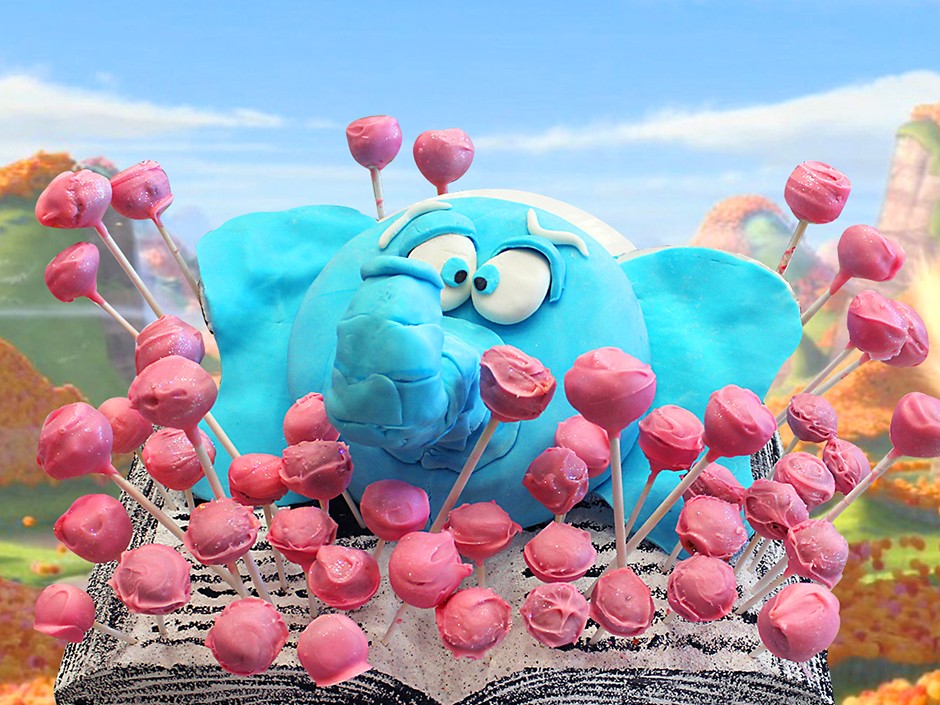 EWU alum Kate Duske created this cake inspired by Horton Hears a Who by Dr. Seuss.

In past years, Horton Hears a Who by Dr. Seuss appeared as a sky blue fondant elephant face, surrounded by a flower bed of pink-dipped cake pops. Cinderella became a multi-tiered castle confection complete with intricately frosted landscaping and a pumpkin carriage in iridescent icing.

An edible house atop a tornado, with pistachio pudding and cherry filling, became an impressive version of The Wonderful Wizard of Oz.

A toilet-shaped cake, thickly frosted in white with some brown and yellow accents in the center, was inspired by the children’s scatalogical classic Everyone Poops. A round cake frosted in orange with the numbers of a clock face was, of course, A Clockwork Orange. “Hint: the internal clock parts are not edible,” read the accompanying sign.

This year’s creations and the books that inspire them, however, can all be shelved as mysteries until the event on May 22.

Plucker came up with the idea for Books2Eat a decade ago after hearing about similar events at other libraries. Each spring since then she’s been serving up literature-inspired cakes at the Eastern Washington University library. She was willing to reveal that one of the books she’s chosen this year is by a local author, but wouldn’t reveal his name or any other details.

Some magnificent cakes have been entered over the years, she says, but an entry doesn’t have to be a showstopper to be clever — and tasty. The creations don’t even have to be cakes. And the books that inspire them can come from any genre, from pulp to the classics.

One of last year’s winning entries — miniature “hamburgers” made of cookies, chocolate and candy — was inspired by a nonfiction book, Hamburgers and Fries: An American Story. Another recent entry, inspired by the instructional Litterbox Training and Other Feline Hygiene Etiquette, was cheekily served from a (presumably new) litterbox.

“The idea was to be creative with literature,” Plucker says.

Children’s books are a favorite for their whimsical themes and story lines, as are contemporary bestsellers like The Hunger Games. Dr. Seuss makes an appearance most years, and Eric Carle’s The Very Hungry Caterpillar is a frequently recurring title for its bright colors and easy translation into cupcakes.

Leslie Swannack, an administrative assistant at the university who has entered — and won — multiple times, says she looks for books that are popular at the time. She’s done Spider-Man before, and last year she did Angry Birds as a set of detailed character heads on sticks. (Yes, the addictive game has spawned a series of Angry Birds books.)

“There are always so many cute ideas that it’s really fun to see what people come up with,” Swannack says.

There are two awards: One for the crowd favorite, and one for the dish that best represents the theme. Half the fun is seeing the creations and voting on favorites; the other half is consuming them. Several hundred people usually help with the eating, many of them students who happily find themselves offered free cake while studying for finals. In recent years, more students have been participating with their own creations, too.

“It’s just for fun, for the students,” Plucker says. “That’s what it’s all about.”