Read all of our coverage on Mike Ehredt's journey here. 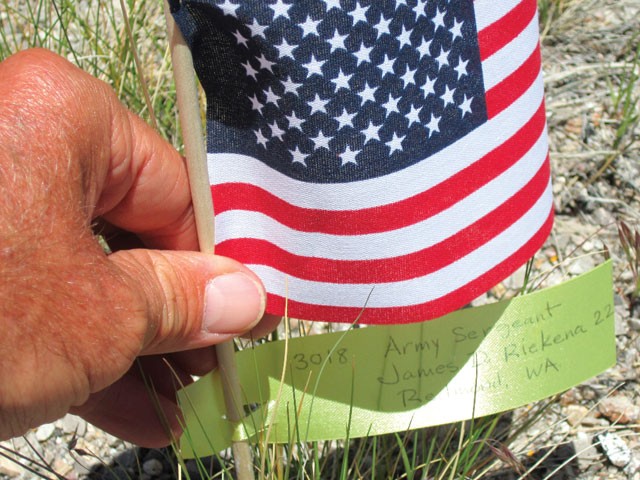 Mike Ehredt
Mike Ehredt places a flag in memory of James Riekena, the 3,018th American soldier to die in Iraq, at milepost 11 along Highway 287 near Rawlins, Wyo., last week.

I’ve never been to Iraq. I’ve never been a soldier. So why does the death of James Riekena bother me so much? The U.S. military death toll in Iraq is up to 4,407, and James Riekena’s name is on the list. A couple months ago, I met a guy who is running across the country placing a flag every mile in memory of America’s Iraq war dead, and ever since I realized he meant every single one, I’ve been restless.

Where is James Riekena on the list, I asked? When? Friday, June 18, early afternoon, milepost 11, highway 287. For a couple of weeks, I’ve been contemplating a 28-hour, four-state round trip from here to the high plains of Wyoming to watch Mike Ehredt put a little American flag — bearing the name James Riekena — in the ground on a gusty stretch of empty road near Rawlins.

Here’s what little I know. James Riekena was an engaging 20-year-old from Post Falls when I first met him outside a storage locker at an old air base in Louisiana. He was with a platoon of Idaho National Guard soldiers just hours away from boarding jumbo jets for their first overseas combat deployment since … well, no one could quite remember since exactly when.

Everyone was antsy. It was their last day in America for a year. They were already talking about coming home and what would they do.

From the few minutes I spent with Riekena, I remember there was something about his voice that was quieter, more substantive than the others when he said he was going to be an English teacher because he was miserable in school, and he didn’t think other kids should have to be, too.

There was something there — a timbre, a quality — that stuck with me, brief though our encounter was. Soldiers who served with him say the same — he had a certain spark in his eye, he was looking far down the road in a good way.

So two years later, when I heard he had almost immediately volunteered for a second tour in Iraq and, after just six weeks in Baghdad, had been blown up by an IED … it hurt.

Here’s what I’ve heard from others: Everyone called him smart, funny, free-spirited. His mom called him J.D.; his solider buddies called him Rick.

Mike Dauber remembers his battle buddy’s motivation for redeploying was his youth.

“He said, ‘I’m single and I’ve got no kids. It would be horrible if someone died and had a whole family to miss him,’” Dauber says. He pauses. “Not that his didn’t. It really broke them up. But he was thinking about wives and children. He was always selfless.”

In fact, there is a story some soldiers from his second deployment told Patricia McCune. Her son realized that an IED was about to explode and either threw himself on it or between it and them, thus saving their lives.

James Riekena was posthumously promoted to sergeant and was awarded the Bronze Star and the Purple Heart.

Chad Harper says he heard a more realistic-sounding account at his friend’s well-attended funeral in Missoula: “Rick was driving [the Humvee] and they were going through a roundabout. About the last thing he said is he noticed a piece of curbing that was dislodged and he swung wide. It went off, and a piece of shrapnel went between two other guys.”

Harper, Dauber and many other soldiers from Iraq say this is the reality of IEDs. Suddenness. Shock. No control over who the shrapnel hits or who it misses.

The Idaho Guard’s Second Platoon survived 900-plus IEDs during their deployment.

To illustrate the fine line of chance, Harper tells about an IED that went off two meters from James Riekena’s head during his first deployment. As Harper punched Humvee out of the blast zone, “Rick started laughing maniacally. By the time we stopped all five of us were laughing hysterically, tears running down our eyes. Another unit was coming towards us to assist and I’ve always wondered what they thought as we rolled out of that Humvee holding our bellies.”

In the adrenaline and horror of nearly being blown up, sometimes you laugh hysterically with your friends. Other times you mourn. Always you remember.

After all, the flag Mike Ehredt planted last week is fragile and small. It will fade far sooner than the stories.