Clubs to check out up-and-coming acts 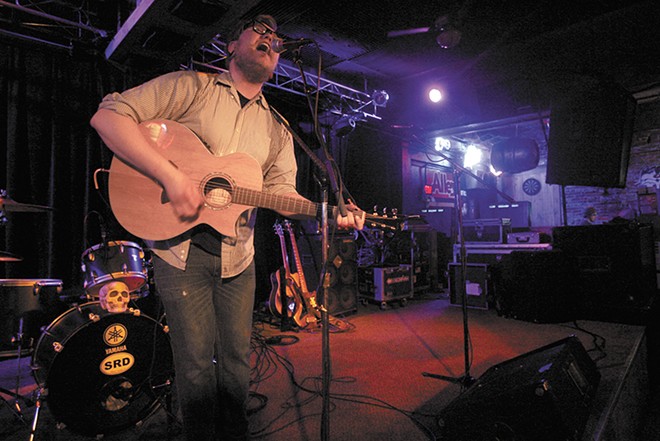 Baby Bar Baby Bar may be dingy and dark (it is a dive bar, after all), but none of that matters when you're shimmying alongside youngish punks/hipsters/art types — the bar's core demographic — to an up-and-coming local act, snapping praise during weekly poetry nights or laughing 'til you cry during its open mic comedy shows. Plus, Neato Burrito is a stone's throw away if you need to refuel between sets. 827 W. First Ave. • 847-1234 • twitter.com/babybarspokane

The Bartlett It's been a year-and-a-half since the venue opened, and music fans are still smitten with the Bartlett, the creation of local musicians/married couple Caleb and Karli Ingersoll. That's not surprising, given the venue's all-ages-friendly calendar featuring everything from indie rock and hip-hop to folk and comedy, as well as events that put local talent in the spotlight, including open mic nights, poetry slams and the Round, an eclectic festival (Bartfest) and solid happy hour offerings. 228 W. Sprague Ave. • 747-2174 • thebartlettspokane.com

The Big Dipper The Big Dipper is the little venue that could. After the once-thriving local institution fell into disrepair, Dan and Dawson Hoerner took it under their wing, crowdfunding for a much-needed sprinkler system and — a rift among management aside — bringing the Big Dipper back to its former glory. Nowadays, you can catch a variety of local and touring acts, all while enjoying a drink from the full bar. Don't worry, kids; the Big Dipper is all-ages. 171 S. Washington St. • 863-8098 • bigdipperevents.com

John's Alley The Moscow/Pullman area may not be the first place that comes to mind when it comes to catching a show, but John's Alley, Moscow's home for live music, has been giving music fans just over the border their fix for years with shows from local and touring acts almost every night of the week. The beer selection is good, and you can entertain yourself with video games or ping-pong. 114 E. Sixth St., Moscow, Idaho • 208-883-7662 • alleyvault.com

Jones Radiator Jones Radiator boasts 16 taps of craft beer, a menu that's easy on the wallet... and no televisions. The venue also offers trivia (on Monday), open mics (Tuesday), Whiskey Wednesday, vinyl nights (Thursday), live music from local and touring acts (Friday and Saturday) and Nerd Night (Sunday). With so much to do, it's no wonder that Jones Radiator has been the place where professional-looking folks down their after-office beers for years. 120 E. Sprague Ave. • 747-6005 • jonesradiator.com

Knitting Factory Music fans young and old have flocked to the Knit for years due to its mix of local spotlight shows and gigs that bring big names to a big stage, but without the overwhelming arena feel. Those shows, many of which are all-ages, couldn't be more eclectic; everyone from Alice in Chains, ZZ Ward and Tech N9ne to ODESZA, Sleater-Kinney and Kidz Bop Live have graced the stage. 919 W. Sprague Ave. • 244-3279 • sp.knittingfactory.com

Lion's Lair Located on the busy corner of Browne and Riverside, Lions Lair draws a diverse crowd with affordable drinks and eats. Want to dance and drink? Check out 50 Cent Wednesdays, with 50¢ drafts and electronic dance music all night. In the mood for hip-hop? Check out DJ Funk's Back to the Old School on Fridays and Saturdays. For the ladies, beers are only $1 (wells are $2) on Thursdays. 205 W. Riverside Ave. • 456-5678 • facebook.com/lionslairspokane

Mootsy's Mootsy's is Spokane's quintessential rock club. The walls are covered in concert posters, the beer is cheap and the music is almost always loud. Shows are usually stacked with local acts, so you're bound to hear something you like. But even if a show isn't going on, swing on by for anything from a craft beer to a cocktail. 406 W. Sprague Ave. • 838-1570

Nashville North Nashville North prides itself in being the only Nashville honky-tonk in the Inland Northwest, and though it's only open Fridays and Saturdays from 6 pm to 1:30 am, the "Ville" packs a lot into those two nights. Dance lessons begin an hour after doors open, then at 9 pm, the music starts, usually a local favorite (like The Luke Jaxon Band) or the occasional national act. Stop by for the drink specials, too. 6361 W. Seltice Way, Post Falls, Idaho • 208-457-9128 • thenashvillenorth.com

The Pin The latest venue to call this space home (following The A Club and Club 412), the Pin is T.C. Chavez's newest live-music venture after the Hop! closed earlier this year. The Pin specializes in rock and heavy metal, from both touring and local acts, and also features electro and hip-hop events, most of which are all-ages. Best of all, most shows won't run you more than $10. 412 W. Sprague Ave. • 624-0746 • thepinevents.com

Red Room Lounge There's always something going on at the Red Room, be it a touring act (El Ten Eleven, Horse Feathers and Warren G have all stopped by), a DJ night or a weekly Unplugged open mic night, all of which maintain the venue's fun, festive vibe and make use of one of the best in-house sound systems in town. FYI: its alcohol selection is so big, the bartender needs a ladder to reach everything. 521 W. Sprague Ave. • 838-7613 • facebook.com/redroomloungespokane

Zola's Zola's is a nightlife triple threat, with a solid lunch and dinner menu, a seven-day-a-week Happy Hour and near-constant live music offerings. The quirky and casual Zola's features one-off shows from Pacific Northwest-based musicians in between residencies from local acts like the Nate Ostrander Trio and Bossame. Just remember; nothing calms workplace rage like listening to live music from a tilt-a-whirl booth. 22 W. Main Ave. • 624-2416 • zolainspokane.com