Kombucha tea has long been homegrown and bottled, but now you can find it on tap 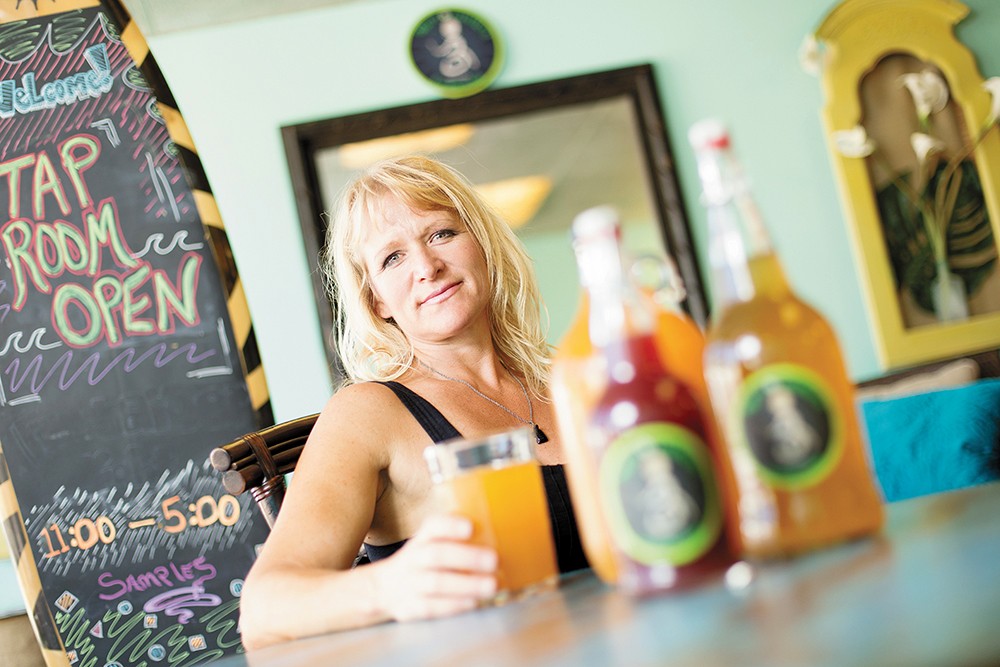 Around the world, it's been given many glowing titles: Elixir of Life, The Divine Tsche, Champignon de longue vie (mushroom of long life) and Tea of Immortality.

Kombucha — a cultured, fermented tea — has been around thousands of years, originating in the East and moving to Western countries in the past century, being extolled along the way for qualities including preventing disease and reversing aging.

"There's been a lot of different claims as far as health benefits, but people have to make their call on what it does," says Heather Threadgill, who has been drinking kombucha for 10 years. Threadgill says she drinks it three times a day on average, alongside a diet of mostly unprocessed foods and a triathlon lifestyle.

Last Tuesday, she opened a taproom called Bare Culture Kombucha in the front of her brewery in Coeur d'Alene, complete with funky colors, laid-back, beach-y décor, bar and table seating and raw food bars. Flowing from the taps, you'll find several flavors — including Paradise Ginger, Strawberry Blood Orange, Sassy Apple and Lychee Passion — that you can get in a glass or growler.

Overstatements aside, it's true that kombucha contains probiotics, which increasing evidence indicates aids digestion and strengthens the immune system.

"[Kombucha] just gives you this kind of pick-up," she says. "It's not like caffeine, where you have the highs and lows ... You feel like you're running your body at an optimal level."

The tea, formerly associated mostly with the hippie crowd, was found only in small health-food stores, but Threadgill says that within the past three years, a growing number of bottled brands and flavors have appeared on grocery (and health-food) store shelves. You can find about 20 varieties at Huckleberry's, Main Market and Yoke's; even Safeway carries about eight kinds.

The home-brewing community is going strong, too.

Julia Neil, the deli manager at Winter Ridge Natural Foods in Sandpoint, brewed and bottled her own kombucha for about a year. All you need is sugar, black or green tea and a SCOBY — an acronym for "symbiotic colony of bacteria and yeast" — the floppy, cream-colored disc of living bacteria that feeds off of the sugar and ferments the tea.

"They just kind of grow to the shape of the container," says Neil. "Every time you do a batch, the mother produces a baby." The baby SCOBY can then be passed on, like friendship bread, to start new batches and the mother can be reused.

"I like my stuff strong," she says. "The more mature the SCOBY is, the better it brews your batches."

Brewing takes between seven and 14 days. After you cook the tea and let it cool, you put it in a glass container with the SCOBY on top, cotton cloth and a rubber band for the lid, then set it in a dark place.

For eight years, Threadgill has been brewing kombucha and sharing it with friends. But her operation got so big she decided to make it commercially on a large scale. She's been brewing in the backroom of 814 N. 4th St. in the new midtown section of Coeur d'Alene for the past year, and selling the kombucha at her frozen yogurt shop in Walla Walla.

In 80-gallon stainless steel fermenters, she brews batches for 20 days, then infuses the kombucha with fresh fruits and herbs in smaller vats. The natural carbonation is topped off with CO and put in kegs. The result: an effervescent, light and fruity drink with a kick of vinegary taste that she now sells at Bare Culture Kombucha.

"I like the thought of having a bubbly drink that gives you that soda feel, but I don't like what soda does to you," Threadgill says.

Kombucha is fairly new to the Coeur d'Alene and Spokane area, Threadgill says, and many people are just starting to become aware it's a drink. "Introducing it on tap is a whole other future," she says.

Her hope is to get it on tap at local restaurants; you can currently find Bare Culture Kombucha on tap at Java's new location at 819 Sherman Ave. in Coeur d'Alene. Winter Ridge has kegerators with three of Bare Culture's flavors available at a time. Since Winter Ridge started carrying it on tap about three months ago, they go through an average of nine kegs per week, says Neil.

"The first day we put it out there, it was just selling like crazy," she says. "It's been a hot commodity." ♦